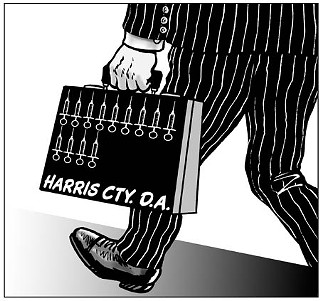 On the morning of Oct. 13, 1980, 19-year-old Joseph Nichols and 24-year-old Willie Ray Williams entered Joseph's Delicatessen in Houston and approached the counter where 64-year-old Claude Shaffer was at the register. Williams and Nichols each pulled out a gun and pointed it at Shaffer, in an attempt to rob the store.* According to court records, Shaffer reached for a gun hidden behind the counter; as he ducked behind the counter, Nichols fired – his single bullet lodged somewhere behind a magazine rack, and he ran from the store. Williams also began to retreat but stopped at the front door. He fired at Shaffer – who was now standing, his back toward the door. The bullet killed Shaffer instantly; Williams returned to the counter, grabbed the cash box, and ran.

Nichols and Williams were arrested, and each was charged with capital murder. Three months later, in January 1981, after confessing to the killing, Williams pled guilty and was sentenced to die; he was executed in January 1995. Nichols pled not guilty: He'd been involved with the robbery but did not intend for Shaffer to die, nor did he take part in the murder. Nichols was tried twice for Shaffer's murder – a deadlocked jury prompted a mistrial the first time around; the second trial ended with a guilty verdict and a death sentence.

He is scheduled for execution on March 7.

It might be tempting to assume that Nichols' 25-year stay on the row is an affirmation that the Texas capital punishment system functions properly – that a quarter-century behind bars means the courts have had ample opportunity to review his appeals and have concluded, based on all relevant evidence, that his execution will pass constitutional muster. But that isn't true: With less than a week until his execution, there remain serious questions about whether Nichols' execution is legally justifiable. His is a case plagued by prosecutorial misconduct and incomplete judicial review. Harris Co. officials withheld from Nichols' attorneys the true identity and whereabouts of a crucial eyewitness, Teresa Ishman, one of two deli employees working with Shaffer the morning of the murder. According to court records, Ishman told prosecutors it was Williams and not Nichols who killed Shaffer, and she confirmed that Nichols fled before the murder. Moreover, at Nichols' second trial, prosecutors completely changed the official theory of the crime in order to secure a conviction and death sentence. At Nichols' first trial, prosecutors argued that Williams fired the fatal shot – an assertion backed up by the physical evidence and the testimony of the county medical examiner – and sought to convict Nichols not as the shooter but as a party to the killing. But the jury deadlocked because Nichols wasn't the triggerman. So at the second trial, in February 1982, prosecutors argued instead that Nichols was the one who fired the fatal shot – even though Williams had already confessed to the killing and had been sentenced to die.

State and federal courts have considered these omissions before, but only in "isolation," says Nichols' attorney, Clifford Gunter, with the Houston firm Bracewell & Giuliani. On Feb. 20, Gunter again appealed Nichols' case, arguing that taken together, the problems with his prosecution are so egregious that the death sentence should be overturned. "Nichols has been inadvertently subjected to a procedural quagmire that has prevented his unconstitutional conviction from being fully reviewed," Gunter argues. "As a result, no court has ever addressed all of the constitutional violations that led to Nichols' conviction for a crime he did not commit … a crime for which the confessed murderer … has already been executed." In short, the court has never ruled whether the individual instances of misconduct could have the cumulative effect of rendering his punishment unconstitutional.

In Williams' case, Harris Co. prosecutors asserted that the evidence conclusively proved him the killer: "That is all there is to it. It is scientific. It is consistent. It is complete. It is final, and it is in evidence," they argued – evidence they offered again during Nichols' first trial. At Nichols' second trial, however, prosecutors abandoned all that evidence and argued that Nichols was the shooter; this strategy was possible only because the state continued to conceal eyewitness Ishman from the defense, argues Gunter. Instead, prosecutors offered only the testimony of another deli employee, Cindy Johnson, who claimed Nichols fired the fatal shot. (According to Ishman, Gunter later discovered, there was no way Johnson could've seen anything because she hid in the bathroom once the robbery began.) By hiding Ishman, the prosecution was able to convince jurors Nichols was the shooter: "And I'll tell you that it was [Nichols'] hand that did the killing," declared the prosecutor. "How do you know that? [Johnson] saw it. She told you."

A federal district judge first overturned Nichols' conviction based on the state's changed theory of the crime (a due process violation), but the 5th U.S. Circuit Court of Appeals reversed, ruling that the error wasn't severe enough to "undermine confidence" in the guilty verdict. In a subsequent proceeding, the court similarly ruled that hiding Ishman from the defense was not so egregious as to undermine the verdict.

While Gunter hopes that the courts will now finally consider the errors' cumulative effect and will throw out Nichols' death sentence, given the complicated nature of the rules governing death-case appeals, it seems unlikely. In fact, "the rules against successive petitions are so onerous" that it is unlikely the courts will consider anything more than whether the appeal was filed properly, says UT law professor Jordan Steiker. "By successfully hiding their misconduct, the prosecution gets the benefit of a process designed to 'streamline' appeals. It is one of the ways that court doctrine rewards prosecutorial misconduct."

Gunter has also filed a petition with the Board of Pardons and Paroles, asking that Nichols' death sentence be commuted to life behind bars – ordinarily, Steiker says, that would be the way to go with a case like Nichols'. "If we had any sort of clemency process, this would be the perfect kind of case," where the executive branch would step in to correct an injustice the courts are ill-equipped to handle. But, he said, "That's not Texas." For sure, the BPP isn't known for righting wrongs – still, Nichols' life might depend on its taking seriously the responsibility to avert an injustice. "To be frank, we are … accusing the State of having deliberately manipulated the justice system … in order to get a second death sentence," reads Gunter's petition. "Executing Nichols would in effect condone" that manipulation, he continued. "When does it end? It should end now."

*Oops! The following correction ran in our March 9, 2007 issue: In last week's News story about the capital murder case of Joseph Nichols ("Nichols Execution: Another Texas death row travesty"), the Chronicle incorrectly reported that the victim, Claude Shaffer, was 70 at the time of his murder. Shaffer was, in fact, 64. Further, the Chronicle incorrectly reported that, according to court records, Shaffer reached for a gun when Nichols and co-defendant Willie Williams pulled out their firearms. In fact, court records reflect that Nichols believed Shaffer was reaching for a gun, prompting him to fire a single round that passed Shaffer and lodged behind a rack inside the deli. We regret the errors.