Tweet
print
write a letter
The Downtown Commission is girding itself for a fight as it begins the process of assessing the status of the city's 35 Capitol-view corridors.

In Austin, some things are clearly deemed untouchable in the city's holy of holies: Town Lake trail, the Jollyville salamander, and certainly the Capitol-view corridors, which guarantee that residents have a clear view of the domed Capitol from around the city. As architectural historian Henry-Russell Hitchcock wrote, "Of all the capitols of the Gilded Age, Austin's … was most like a parody of the national Capitol. … Sharp of line, sensitive in texture, the huge mass is even more impressive because of the rough quarry finish. There is a mountain-like grandeur and variety to the Capitol. Evening brings a purple cast to the earth-red surfaces; at daybreak the granite is the gold of the sun."

The fight to preserve the Capitol views goes back as far as the construction of the 25-story Westgate in 1965, when alarmed lawmakers scrambled to condemn and purchase the property just west of the Capitol in order to preserve the view of the dome. They failed. By the time the Capitol-view corridors were designated in state law in 1983, high-rise structures blocked the view of the Capitol from St. Edward's University, Mount Bonnell, then-Municipal Auditorium, and most of Zilker Park to the south.

Just the hint of a challenge to the view corridor – Travis County's consideration of two county-owned sites Downtown for a new civil courthouse – brought out both the Texas Historical Commission and the Heritage Society of Austin. Last week, county commissioners decided they could not throw their full support behind such a proposal, given such overwhelming opposition from historical groups. Instead, they may consider options such as the far more pricey demolition of the existing county administration building on the adjacent block for use as a courthouse site. The Stokes Building, unlike the two other sites, does not sit in any view corridor.

The view corridors are on the radar for city leaders. Mayor Will Wynn has been quoted as saying that a 1.8-second view of the Capitol off I-35 has cost the city millions in development. Council Member Mike Martinez, in the vote on the 400-foot CLB high-rise at Seventh and Rio Grande, noted that, right or wrong, height across Downtown would be sporadic, rather than consistent, due to the existing view corridors.

The new assessment of the Capitol-view corridors comes at a critical time in the creation of a downtown plan. At an informal lunch meeting a couple of weeks ago, members of the Downtown Commission divvied up the various corridors for assessment. Members discussed how to assess the value and quality of each corridor and how – if it at all – the commission should consider the removal of a particular view from the corridor list.

The original city-issued document on the corridors spoke of assessing corridor views in their impact on the value of surrounding property. It also divided view corridors into categories: corridors created by publicly owned property, corridors that correspond with historical boundaries, and even corridors with "dramatic glimpses."

Pictures already have been taken from each "view," noting new obstructions or even overgrown tree limbs that block the view. It's assumed that in some cases – such as the construction of state parking garages and adding the upper deck on the UT football stadium – views have been all but obliterated.

Commissioners have not said they intend to remove any corridor views from the list, at least not yet. Some initial recommendations should be back before the commission in a week. 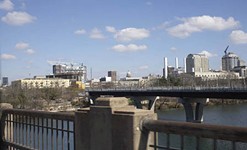 Revisiting the Capitol View Corridors: Where's the View?
Window for public comment on Downtown Commission report on corridors closes after May 4