Only one week and a day had passed since I announced that I would be the official blogmaster for the John Edwards campaign for president when Bill Donohue, the head of the right-wing Catholic League, called me a little brat after working himself into one of his patented faux outrages on Tucker Carlson's show on MSNBC. To be precise, Donohue actually referred to my friend and new colleague on the campaign, Melissa McEwan, and me as "two little brats," even though both of us have more than a couple decades of living since the days when we were eligible to be called "little brats" and sent to stand in the corner. In almost any other situation, I would have been delighted at having the professionally offended culture warrior Donohue call me a disparaging name and would have run straight to my personal blog – Pandagon – to crow about it. On this particular Feb. 7, though, I knew better than to come out swinging at the cranky wing nut Donohue – because I was now working for a presidential campaign.

Donohue was running to all the cable news networks and major news organizations to peddle his complaint that the new, distressingly feminist bloggers for the Edwards campaign had been insufficiently reverent of his religion. His official reason was the "vulgar" language McEwan and I used on our personal blogs before we started working for the Edwards campaign. The connection between girls cussing and anti-Catholic bigotry was tenuous at best. As evidence that McEwan was a horrible anti-Catholic bigot, Donohue reported in his Feb. 6 press release that she had described herself as the "Queen Cunt of Fuck Mountain" (not terribly ladylike, perhaps, but also a sidelong pop culture reference to the HBO comedy series Mr. Show With Bob and David). McEwan wrote this on her blog, Shakespeare's Sister. Why it might be evidence of some deep-seated hatred of Catholics Donahue left unexplained.

Donohue's evidence that I was an anti-Catholic bigot was a joke, actually a picture caption, on Pandagon:

Q: What if Mary had taken Plan B after the Lord filled her with his hot, white, sticky Holy Spirit?

A: You'd have to justify your misogyny with another ancient mythology.

Vulgar and impious, sure. But in his ongoing rampage to label me as some sort of Catholic hater, Donohue failed to explain why this joke expresses anti-Catholic bigotry, since it's about the virgin birth – which virtually all Christians, not just Catholics, accept (at least officially) on faith. Perhaps he didn't elaborate because he culled it from a post about how an Austin Catholic church was distributing anti-contraceptive materials full of lies and scientific misinformation. It's hard to argue that your target is bigoted against Catholics when you're quoting a post she wrote about how the church is wrong to lie to living, breathing Catholics.

To its credit, the Edwards campaign stood by its decision to hire McEwan and me, but Donohue and the Catholic League were on the warpath. A week later, Donohue issued another press release denouncing me as a bigot, this time because I had the nerve to point out the Catholic Church is patriarchal. It was clear Donohue had no intention of letting us do our work. No matter how untrue the allegations that I – an alum of St. Edward's University – was somehow bigoted against Catholics, if my presence on the campaign was going to attract this much negative attention, then I wouldn't be any good to John Edwards and his candidacy. I decided to resign. My term of employment as the official blogmaster of the campaign lasted all of two weeks. My things were packed, but it was over so quick, I hadn't even made the move to North Carolina.

In retrospect, the entire episode had very little to do with religion and, despite Bill Donohue's manufactured outrage, almost nothing to do with religious bigotry. The charges against us were concocted of one part highly selective quoting and two parts hoping that the audience wasn't paying very close attention. The hate mail that filled my e-mail box is a testament to this fact; I got so many e-mails from people wondering why I "hated" God that I gave up writing back to point out that I can't very well harbor hate for an entity I don't believe in. No, the mainstream media picked up this story because of the much more substantiated claim that McEwan and I were vulgar. 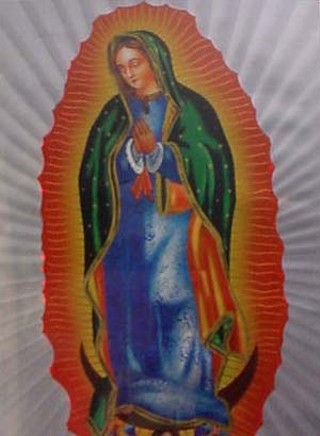 As evidence of Marcotte's "bias against Catholics," Bill Donahue cited her use of this illustration on her blog, Pandagon, with the caption:
Q: What if Mary had taken Plan B after the Lord filled her with his hot, white, sticky, Holy Spirit?
A: You'd have to justify your misogyny with another ancient mythology.

"Vulgar" was the favorite word of our critics and of people who proclaimed their objectivity while eagerly inflating this story as if it had merit. In modern American English, "vulgar" has two meanings. Most of the time, it's used to denote scatological humor or the seven words you can't say on TV. But its other, much older usage is to describe those things that are "low class," of the common people, part of popular culture. "Vulgar language" has described the vernacular of the working class much longer than it has denoted words that make your grandmother blush. It wasn't difficult to figure out that the vulgarity raising enough alarm to put newbie staffers like McEwan and myself into the headlines was the vulgarity of the common people. Joan Walsh in Salon.com approvingly described our personal blog style as "street-fighting." A good deal more primly, The New York Times' John Broder called our personal blog writings "vulgar and intemperate" and suggested that Edwards had disciplined us into writing in a more "civil tone." To Broder's credit, he avoided suggesting that the campaign would teach us to wash behind our ears, but since we resigned less than a week later, he may not have had a chance.

After we resigned, the Monday morning quarterbacking began. In her companion piece to my Salon article about the entire dustup, Walsh wondered what the campaign could have been thinking to hire such vulgar bloggers. "Why did either John Edwards or Amanda Marcotte enter their relationship so seemingly unready for what was likely to happen (assuming anyone in the Edwards camp had read Pandagon)? Either Marcotte would blunt her commentary, and lose the constituency Edwards was attempting to court, or else she'd alienate a whole lot of other people, and Edwards would spend the whole campaign defending her."

The question "why bloggers?" – and make no mistake, this was about bloggers, which is why McEwan and I were both targeted, despite our very different styles – perplexed the established media. It didn't really puzzle me. Granted, hailing from a flyover state, and from the Texas Hill Country with its rich populist history, I had a distinct advantage in having a vulgarian's perspective. Politicians reach out to the rabble because the rabble still has the right to vote. Democratic politicians are in a particular predicament, because while they generally propose better policy positions for the uncouth rabble than the Republicans, the Republicans have managed to dominate many of the nonmainstream media outlets for extending "beyond the Beltway." The Democrats are looking for a way to reach out to the rabble, and blogs are one means to that end. The fear lingers now that our railroading on false charges of religious bigotry was a test case – a newly tried method for the right-wingers, with a heavy dose of help from the mainstream media, to separate Democratic candidates from their opportunities to do voter outreach to the rabble by engaging bloggers.

By the end of my ordeal, the emptiness of the right-wing myth that the U.S. has a "liberal media" was abundantly reaffirmed. For days, McEwan's and my vulgar ways were headline news – I confess a moment of guilty relief when Anna Nicole Smith died and the media suddenly seized upon a new vulgarian. Could there ever be a similar media frenzy over the Republican pandering to the gay-bashers or even a simple acknowledgment that President Bush's photogenic brush-clearing at his Crawford ranch is chiefly designed to disguise the fact that Bush's primary relationship with people who actually live by their manual labor is one of screwing them over every chance he gets? Even to ask such questions imagines a Capitol press corps that simply doesn't exist.

But my experience was certainly another lesson in what kinds of manufactured controversies will hook the major media. Right-wing bloggers manufacture wannabe scandals relentlessly, always hoping that whatever they're pretending to be outraged about today will become the outrage interesting enough, or simply noisy enough, to capture the easily bored attention of the mainstream. Just before they charged after McEwan and me as vulgar trash-talkers, they were trumping up a scandal from the fact that John Edwards has a large house – unlike all those other presidential candidates, who live in hovels.

According to the right-wing noise machine, the Edwards campaign was at once both too vulgar and too refined. That such piddling rubbish even makes its way into the mainstream media is a baleful commentary on the state of U.S. journalism. That the nonstory about us barbarians blogging at the gates briefly became the scandal of the week speaks volumes about the skewed priorities of the media giants that dominate far too much of our national discourse.