Tax-funded anti-abortion group uses PR campaign to smear Chronicle, rather than truly responding to our story 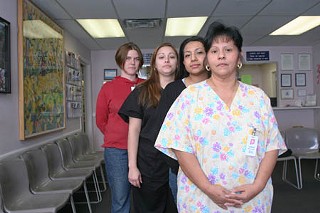 The Alternatives to Abortion program diverted $5 million from actual health-care workers such as these at East Austin's Planned Parenthood clinic, to fund nonmedical "crisis pregnancy centers" that directly served only 11 women last year.

On Feb. 13, The Austin Chronicle acquired a seven-page document, produced on Texas Pregnancy Care Network letterhead, recounting a host of complaints about our Jan. 26 news feature, "No Real Alternative," detailing TPCN's administration of the new, state-funded Alternatives to Abortion program. The Feb. 1 memorandum is unsigned, but we've been told that it originated with the office of Sen. Tommy Williams, R-The Woodlands, who authored and carried the budget rider that created the Alternatives to Abortion program back in 2005. More precisely, the document appears to have been produced by the high-powered political consulting firm the Eppstein Group, led by Bryan Eppstein, which has done campaign work for many GOP lawmakers, including Williams. We tried to confirm this provenance from the horses' mouths, but at press time, neither Eppstein nor Williams' aide had returned numerous calls requesting comment on the document – supposedly aimed at "correcting" a story we had published. (Download the whole document here.)

That's not surprising; during the time the story was being reported, TPCN declined to respond to numerous direct inquiries about its government-funded program.

According to the memo, a "tabloid publication" (that's us) had published an article about TPCN that was rife with errors; this memo, its unidentified author writes, is intended to provide "responses to several of the most egregious errors reported in the story" – including that we misled readers about the program's purpose and progress and raised questions about certain TPCN efforts in a way that unfairly implied an underlying ill motive.

The complaints themselves weren't surprising – our assessment of the TPCN program was hardly flattering. Yet none of these alleged errors were ever raised with the Chronicle: Following publication, neither Williams, Eppstein, nor TPCN Executive Director Vincent Friedewald contacted us to complain about errors, to request a retraction, or even to offer a written response for publication. Instead, the memorandum was submitted to the Houston Chronicle, in an effort to have retracted a Feb. 1 Houston Chronicle editorial that cited our story and called into question the process by which funding for the Alternatives to Abortion program was appropriated – through a rider offered by Williams, during a meeting of the Senate Finance Committee in March 2005.

As we've reported over the past year, Williams' rider set aside $5 million (from family-planning funds) over the biennium to administer a program explicitly intended to "promote childbirth" over abortion, primarily through a network of nonprofits, mostly "crisis pregnancy centers" – most run by vociferously anti-abortion groups that offer no medical services whatsoever. Lawmakers later told us they felt misled by Williams' assertion that the rider would not impact funding for traditional providers of preventative medical services for poor women – as in fact it has done.

Traditional family-planning service providers – like Planned Parenthood (the best-known but by no means the only group providing reproductive health care for low-income, underinsured women) – offer a host of medical services (including gynecological exams and cancer and diabetes screenings), as well as counseling on a wide range of topics (including adoption, abortion, parenting, and domestic and sexual violence). By contrast, the providers funded by Alternatives to Abortion provide no medical services at all but must simply guarantee that they will not "promote, refer or perform" abortions.

The rider passed without any real debate and without the consideration of lawmakers outside the Senate Finance Committee. A year later, in March 2006, the Texas Health and Human Services Commission awarded the $2.5-million-per-year contract to the TPCN, a brand-new nonprofit whose directors, according to their résumés, have no experience in nonprofit administration nor in women's health care. Under the contract, TPCN gets a lump sum from the state each month – unlike most other programs funded with federal welfare money, like women's health-care services, which are reimbursed after services are rendered and documented. In January, we reported that under this system, during FY 06, TPCN had invoiced the state for more than $600,000. Although well more than $100,000 supposedly went to pay for "client services," it wasn't until August that the group reported spending any money on services; in that invoice, TPCN reported spending $50.98 on client services. In all, according to TPCN's numbers, in FY 06 the group served just 11 clients statewide – in essence, at that time, the program had cost $58,086 per client. An unsigned memorandum on TPCN letterhead claims to respond to "several of the most egregious errors" in a recent Austin Chronicle story. In fact, the "errors" are imaginary, and TPCN will not respond to our questions about its programs.

In its Feb. 1 memorandum to the Houston Chronicle, TPCN and its defenders assert that our reporting of the FY 06 numbers – based directly on TPCN and HHSC documents, since TPCN declined to speak with us – was "misleading." How it was misleading isn't clear. The letter says that TPCN was only ready to serve clients during the last three weeks of FY 06, and therefore, apparently, serving 11 clients was a great show of success. While it is true that TPCN didn't ink its contract with HHSC until March, it is also true that TPCN itself designed the rollout of the program and provided HHSC in late February 2006 a revised plan of action, along with estimates for the amount of money needed to get the program up and running and the number of clients that would be served by the end of the fiscal year. In the end, TPCN missed the mark on many of its own self-designed performance measures, including an estimate that total start-up costs would come in at less than $300,000 and that as many as 350 clients would have received services by Aug. 31. (The memo also offers a revised version of cost-per-client at $52.95, but that number is accurate only if what TPCN calls "client visits" were actual counseling sessions, not walk-throughs, and if it's allowed to ignore several hundred thousand dollars in its own "administrative" costs – a real stretch.)

The other objections from TPCN are similarly empty in substance. One is that our story "raised questions about the content and quality of educational materials approved by HHSC and purchased by TPCN for distribution to its Service Providers." This is true: Although we sought to review the materials prior to the story's publication, we were denied access – first by HHSC, which claimed it did not have the materials, and then by TPCN's Friedewald, who sent us an e-mail (which we published in its entirety), informing us that "as a small private business" TPCN didn't have the time or inclination to respond to open-records requests. (Apparently, they're much too busy writing self-justifying memoranda.)

Shortly after our article was published, we were contacted by HHSC and told that the agency had acquired the materials and would be able to make them available for inspection. We reviewed them earlier this month – under the watchful eye of an HHSC representative, who told us she was directed to sit with us during the entire visit.

The TPCN memorandum asserts that the group only buys educational materials that "meet high quality standards"; that cite "legitimate authorities, such as the Centers for Disease Control and Prevention, or … articles published in peer-reviewed medical literature"; and that it buys no "materials that are political, judgmental, reflect activist sentiments or that contain spiritual or religious content." Our review of the TPCN materials contradicts those assertions. We found biased materials – many that appear to spin medical information toward a particular political point of view, such as that found in abstinence-only sex education – and materials that cite dubious sources other than medical and/or health authorities.

For example, some sources of information were commercial interests and not legitimate scientific sources. The pamphlet "Coming Home With Your Baby" refers to a commercial Web site, MothersBliss.com, based in the United Kingdom (which sells items for pregnant women, such as lollipops that are supposed to help with morning sickness) as a source of medical information regarding jaundice in newborns. But the MothersBliss Web site does not cite any legitimate medical authority for any of its information, and a site disclaimer says it is not in the business of "giving medical counseling or other professional services or advice" and is not intended "in any way" to "take the place of a doctor's or a health professional's advice and treatment." (At press time, company representatives had not responded to our request for sourcing information.)

Additionally, many of the educational materials – pamphlets, brochures, books, DVDs, and videotapes – paid for by TPCN with $75,000 in taxpayer money, according to the state contract – are already available for purchase (or, in some cases, for free) from the few legitimate medical authorities they do cite. For example, the pamphlet "Your Baby Learns From Every Experience," which TPCN bought from the self-described pro-life publisher Heritage House 76, cites as references the National Institutes of Health and the D.C.-based nonprofit Zero to Three (whose work is supported, in part, by the federal government and the Boston University Medical Campus), both of which will provide educational materials to nonprofit groups like TPCN without using the Heritage House middleman.

In short, the state of Texas (and Texas taxpayers) have paid TPCN to buy materials that are either religious propaganda or that could be acquired directly elsewhere – often at no cost.

There is at least one thing in the TPCN memo that is absolutely correct. It complains that the Chronicle's "critiques" of the Texas Pregnancy Care Network were based in part on the fact that TPCN doesn't provide any health care or medical services to women. But "The Program," they write, "was never intended to provide medical services."