Health, Hype, and the HPV Vaccine 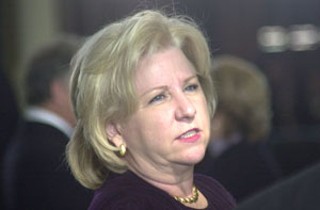 Sen. Jane Nelson, R-Lewisville (Photo By John Anderson)
Opposition to Gov. Rick Perry's surprise HPV vaccine mandate had begun even before the governor's State of the State address Tuesday. At a hastily called press conference Monday morning, Sen. Jane Nelson, R-Lewisville, who chairs the Senate Health and Human Services Committee, asked Perry to rescind his executive order so legislators can weigh the pros and cons of a vaccine that has been on the market for only six months. Nelson said her three primary concerns about the drug are cost ($360 for a three-shot regimen), safety, and parental rights.

Although immunizing all of Texas' sixth-grade girls, as well as all uninsured girls ages 9 to 18, as Perry called for, would reportedly cost about $50 million in the first year alone (half of which would come from federal tax money), HPV-vaccine supporters say that's a small price to pay in order to, literally, eradicate an entire strain of cancer. In fact, Rep. Jessica Farrar, D-Houston, and Sen. Leticia Van de Putte, have filed a bill calling on the Health and Human Services Commission to adopt rules for vaccinating against HPV and to develop a public-education campaign regarding the virus and vaccine. Perry has ordered the Department of State Health Services to make the HPV vaccine available to low-income children through the Texas Vaccines for Children program and has ordered the DSHS and Health and Human Services Commission to "move expeditiously to make the vaccine available as soon as possible." Perry's order notwithstanding, Farrar will move forward with her bill, HB 215, which seeks to codify many of the same provisions included in Perry's order, said assistant Lillian Ortiz. The difference between an executive order and a law, Ortiz said, is that an order "could be revoked."

And Rep. Dianne White Delisi, R-Temple, who was reported to have swayed Gov. Rick Perry to go with his executive order, sent out a statement Monday protesting efforts to lump her in with the vaccine supporters. Delisi, chair of the House Public Health Committee, said she respected Perry's cancer fight, but she supported the vaccination policy coming before the Lege. "This is an issue of strong interest to me and to my constituents. This issue requires public hearings, citizen testimony, and debate on the floor of both the Texas House and Senate," Delisi said. "I must consider carefully the costs and benefits of all proposed health-care legislation. I defend the constitutional role of the legislature in balancing budgetary priorities and available funding." – Jordan Smith, Amy Smith, Kimberley Reeves

Last month, Gov. Rick Perry enlisted Texas in the race to cure cancer. This month he wants us to join the race to sell the Texas Lottery, lest the market price drop and we miss out on a grand investment opportunity. "But if we act now," Perry said Tuesday in his State of the State address, "we can invest in our classrooms, laboratories, and hospitals, giving hope to those who need it most." In other words, Perry wants to pin the financing of cancer research, health insurance, and public education on the sale of the lottery system, which currently generates $1 billion a year for education. There is something unseemly about selling the lottery to pay for education and health-care programs. If a sale is in order, why not invest the money in highway construction, say, or Perry's business-enterprise fund or some of his other pet projects? Judging from the initial reaction from lawmakers, Perry's proposal will be a tough sell. Lt. Gov. David Dewhurst seems cool to the idea. His main concern, he says, is the likelihood of education funding coming up short by $1 billion to $1.5 billion. On the House side, Democrats had similar concerns. Houston Rep. Garnet Coleman questioned the logic of banking on the sale of the lottery to pay for programs that always get short shrift. "Instead of gambling on selling the Texas Lottery," he said, "the people of Texas deserve greater investments in their budget priorities, including better schools for our children, affordable college for our families, and a healthier Texas." On the whole, Coleman said, the governor's legislative agenda contains some admirable proposals, but selling the lottery to pay for the human side of the proposals carries too many risks.

Perry also vigorously defended his executive order requiring young girls to receive vaccines against the HPV virus that causes cervical cancer. "I understand the concern some of my good friends have about requiring this vaccine, which is why parents can opt out if they so choose," he said. "But I refuse to look a young woman in the eye 10 years from now who suffers from this form of cancer and tell her we could have stopped it, but we didn't." He followed up with this clincher: "Others may focus on the cause of this cancer. I will stay focused on the cure. And if I err, I will err on the side of protecting life." – A.S.

• It takes a bold man to mention a third flagship university in the middle of Longhorn country, but that's just what Sen. Kirk Watson (D-Austin) did at the Real Estate Council of Austin luncheon last Tuesday. Watson said he intended to file legislation to begin the exploration process, possibly through the Texas Higher Education Coordinating Board, to create a third flagship in addition to UT and Texas A&M. He's still sketchy on the details of the proposal, except to say that the third flagship could be an existing university system or campus within the UT or A&M systems, might come with a tax-abatement package from the host city, and would not access the Permanent University Fund. Watson says the state is simply growing too fast – with too many demands – not to have a third university in the state with first-tier research capabilities. – Kimberley Reeves

• Austin State Rep. Eddie Rodriguez has filed legislation that would allow school campuses to offer all of their students a free lunch, regardless of income. The federal National School Lunch Act lets schools and districts do this because it can reduce the administrative cost of dealing with each family on a case-by-case basis, and it can also increase participation in the program by reducing the stigma associated with it. But according to Texas law, only districts can decide to provide free lunches to all students; individual schools don't have that option. Rodriguez hopes to change that with HB 454. "Texas is allowing too many children to fall through the cracks," he said, "despite the net provided to us by federal law." – Michael May

• The House Democratic Caucus has re-elected Waco Rep. Jim Dunnam to a third term as chairman, while Jessica Farrar of Houston was elected vice chair, replacing Austin's Dawnna Dukes. Terri Hodge of Dallas and Veronica Gonzales of McAllen were re-elected to their respective posts as treasurer and secretary. While still the House minority, the Democrats are six seats stronger than they were in the previous legislative session. In a statement, Dunnam pledged to make communication channels more effective for the 69 Democrats in the House. – A.S.

• Sen. Florence Shapiro, chair of the Senate Education Committee, continued to push for end-of-course exams during a speech last week to the Texas Association of Business. Shapiro, R-Plano, said end-of-course exams are a fairer, more complete way to test student knowledge of high school curriculum than the current TAKS test. But such exams would mean that students would be required to pass 12 state-standardized tests over the course of a high school career, along with the various retakes for those who fail the first, or even second, time. Superintendents at the Texas Association of School Administrators' conference early last week expressed heavy high-stakes testing burnout. One superintendent complained that he had to put 17 days aside for testing during this school year because of the demands of field-testing future tests. Shapiro has the support of Lt. Gov. David Dewhurst, but it's still unclear whether the House and Gov. Rick Perry are on board with the proposal. – K.R.

• Veteran El Paso Senator Eliot Shapleigh recently released Texas on the Brink, a numerical snapshot of how the state stacks up against the union's other 49. Its findings? Texas ranks first in percentage of uninsured children and in income inequality between the rich and poor and second in percentage of the population without health insurance. We're 47th in the nation in SAT scores and last nationwide for nonelderly women with health insurance and for women older than 40 who receive mammograms. See the entire report at www.shapleigh.org. – Wells Dunbar

*Oops! The following correction ran in our February 16, 2007 issue: A news story last week ("Health, Hype, and the HPV Vaccine") may have left some readers with the impression that Rep. Dianne White Delisi, R-Temple, had privately lobbied the governor for an executive order on the HPV vaccine and then publicly objected to the mandate. "Every action taken by Representative Delisi since this executive order was released has been consistent with her belief that this is a matter to be resolved by the Texas Legislature," said Delisi's chief of staff James Cooley. The Chronicle regrets the errors.