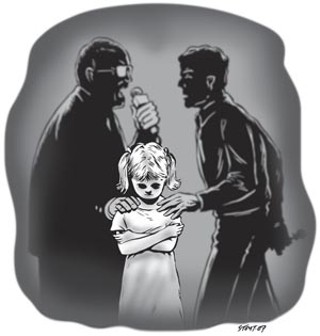 As untold numbers of assaults likely go unreported, it's hard to know for sure how grave a problem child sexual assault is. The media landscape eagerly promotes the impression of sexually deranged prowlers behind every corner – virtual and real. The latest Texas contribution to the trend dates from a summer 2005 "No Spin Zone," during which Perry appeared opposite Factor host (and master hysterian) Bill O'Reilly. Defending state policies on sex offenders, Perry muttered what were perhaps the most truthful words ever to pass his lips: Texas has "been called a lot of things. … Soft on crime is not one of them." But nothing short of 25-year minimums for undifferentiated "sex offenders" was acceptable to the ratings-prurient cable host. O'Reilly fostered what has become a national crusade, and Perry's humiliation was the seed of the new Texas proposals, demanding blood as atonement.

The terrible power of that everywhere-and-nowhere bogeyman, the Internet, courses through the public's fears. Its most prominent media home is NBC's Dateline pederasts-on-parade series, "To Catch a Predator," in which men, after chatting online with someone they believe to be an underage girl, are instead arrested and shamed on camera. The Columbia Journalism Review has an excellent article in its current issue, in which Douglas McCollam deconstructs the ethical, political, and public-safety ramifications of the show. Dateline's ratings success, reports McCollam, is skewing public policy: "[When] Attorney General Alberto Gonzales gave a speech about a major initiative to combat the 'growing problem' of Internet predators, he cited a statistic that 50,000 such would-be pedophiles were prowling the Net at any given moment and attributed it to Dateline. Jason McLure, a reporter at Legal Times … asked the show about the number. Dateline told him that it had gotten it from a retired FBI agent who consulted with the show. When the agent was contacted he wasn't sure where the number had come from, terming it a 'Goldilocks' figure – 'Not small and not large.' He added that it was the same figure that was used by the media to describe the number of people killed annually by Satanic cults in the 1980s, and before that … as the number of children abducted by strangers each year in the 1970s."

There you go – the numbers on Internet sex predators are recycled from our collective "stranger danger" and "satanic panic" scares, which eventually fizzled into obscurity. Dewhurst didn't cite the 50,000 number, but he did make another claim – also misleading – that one in five teenagers is sexually solicited online. The CJR article cites the Justice Department's one-in-five figure before continuing that, while 19% of teens indeed say they received online "solicitations," "half … came from other teens and none … led to a sexual assault." Furthermore, "The number of teens aggressively solicited by adults online was about 3%. A more recent study … found that the number of kids getting unwanted sexual advances on the Internet was in fact declining. In general, according to data compiled by the National Center for Missing and Exploited Children, more than 70% of sexual abuse of children is perpetrated by family members or family friends."

Re-read that last sentence. Despite all the continued scares – strangers, Satanists, and now, the Internet – "more than 70% of sexual abuse of children is perpetrated by family members or family friends." Therein lies the biggest fault with Dewhurst's rightward-tacking promises to get "Texas tough" on sexual predators: Knowing that the perp may be put to death for his crimes will create enormous additional pressure on families and victims to stay quiet, perpetuating the abuse.

No less than the Texas Association Against Sexual Assault, whose legislative agenda includes measures like ending the statute of limitations on sexual-assault crimes, opposes HB 8 for its unintended side effects. It's easy to send sex offenders to death row when they're some predatory other, lurking on the dark corners of the Web – it makes for sensational public policy, and great ratings, in part because it absolves us of our collective guilt – but many victims (and their families) won't want to send their cousins, uncles, or fathers to their deaths. A punishment as draconian as the death penalty will undoubtedly deter, rather than encourage, reporting.

As even Dewhurst should know, there's "Texas tough," and then there's Texas stupid.