Tweet
print
write a letter
Gov. Rick Perry signed on Jan. 29 an executive order creating the state Criminal Justice Statistical Analysis Center to collect and analyze data and make assessments about the state of Texas' criminal justice programs and initiatives and to act as state liaison to the U.S. Department of Justice – a move that will also make the state eligible for additional federal criminal justice funding programs, according to a Perry press release. "By providing objective reports on statewide criminal justice trends, the [SAC] will help policy-makers develop effective and efficient criminal justice programs that will keep Texans safe," Perry said. The center will help "manage our prison population better" and will "attract more federal funds" for crime prevention and other justice programs.

In other words, it looks like Perry has decided to reconstitute the state's Criminal Justice Policy Council, which he unceremoniously axed back in 2003, by removing state funding for its activities – that is, crunching numbers and reporting to lawmakers on all things criminal justice related – amid talk that the seemingly myopic move was Perry's way of sticking it to the CJPC's former director, Tony Fabelo, who was lukewarm about Perry's prison privatization dreams and whose just-the-facts-ma'am reports could be nothing short of embarrassing assessments of the way the state runs its justice programs. (For more on the CJPC, see "Who Fired Tony Fabelo?," April 30, 2004.) Of course, if you ask Perry's press folks, the newly created SAC is totally different from the CJPC. Spokesman Ted Royer says the similarities exist only "on the surface." Whereas the CJPC was "charged with actually making [policy] recommendations to legislators – 'you should do this, we should do that,'" Royer said, the newly created SAC will be "purely objective" and will only "prepare reports and hand them to legislators instead of suggesting a specific course of action." In other words, it is almost exactly the same. Oh no, says Royer: Whereas the CJPC had a nearly $1 million budget, the SAC initially will receive only $330,000 in state funding, which will represent a "real cost-savings to the state."

Flimsy distinctions aside, this time around Perry has tapped Janna Burleson, former policy advisor to Sen. Royce West, D-Dallas, who most recently served as Perry's criminal justice policy adviser, to head up the policy group. Meanwhile, Fabelo, who had served in that same (but somehow different) role for two decades before being fired two years ago, now works as a national consultant on prison issues for clients – including state governments – who apparently don't mind receiving those pesky policy recommendations. 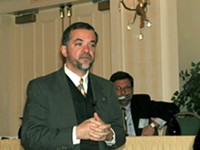 Who Fired Tony Fabelo?
The 'private' tale behind Perry's veto of the Criminal Justice Policy Council