Pitonyak Trial: From Court TV to You 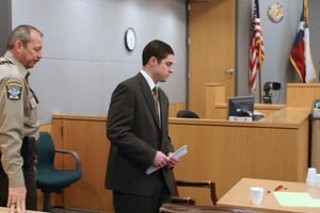 Colton Pitonyak is led into the courtroom before being convicted of murder. (Photo By Jana Birchum)

In the end, the jury didn't buy it.

On Monday, despite a yeoman's effort by defense attorney Roy Minton, at his aw-shucks best, to portray his client Colton Pitonyak as a drug-addled fool who somehow shot his friend Jennifer Cave in a delusional, drunken stupor, a Travis Co. jury found the 24-year-old former UT student guilty of "knowingly and intentionally" murdering Cave and quickly sentenced him to 55 years in prison. In truth, the verdict was predetermined when District Judge Wilford Flowers declined to offer the jury manslaughter or some lesser charge; given a decision between innocence or guilt for Pitonyak, who grimly acknowledged on the stand that he "must have" killed Cave, though he could not remember doing so, the jury had little actual choice. (A manslaughter or second-degree murder conviction would have left Pitonyak liable for 20 years or less.)

Beyond the sentence, it would have been an ordinary gunshot murder, not the headline and Court TV-grabber that it became – except for what happened after Cave's death.

Sharon Cave's words and demeanor were so delicate – subtly graphic and horrifying – as she related the discovery of her 21-year-old daughter Jennifer's dismembered body inside Pitonyak's West Campus apartment, that her testimony seemed clipped from the footage of some softly lit melodrama. Cave's testimony riveted the hushed courtroom in the second day of the trial. "I said, 'Is it Jennifer? Is it Jennifer?'" Cave said quietly, recalling her question to her friend Jim Sedwick, asking if Jennifer was inside Pitonyak's empty apartment. "I knew [she was dead] when Jim came out and said he saw her feet [in the bathtub] – because she had freckles on her feet; he saw her feet."

Pitonyak testified that Cave was his "best friend" but told jurors that he has virtually no memory of the night she was killed because he was intoxicated on alcohol and pills. He said he didn't know Cave was dead until sometime the next morning, after he woke up from a several-day bender that had culminated with a night on Sixth Street with Cave; he found Cave's lifeless body in his bathtub. Asked by Minton why he didn't call immediately for emergency help, Pitonyak said he panicked; he couldn't remember what had happened and wasn't thinking straight.

What happened next was equally inexplicable: Cave's body – which showed post-mortem stab wounds and a second gunshot wound to the head – was dismembered, draped clumsily in a brown rug, a hacksaw resting on her chest, her head and hands wrapped inside a black plastic garbage bag left next to the bathtub – part of an apparently aborted attempt to dispose of her corpse. Pitonyak couldn't explain why Cave's body had been cut up (he was not charged with desecrating a corpse, a misdemeanor), but he did lay the blame on his friend, 23-year-old Laura Hall, who came to the apartment that morning, Pitonyak testified, shortly after he'd discovered Cave's body.

That evening Pitonyak and Hall fled to Mexico, where they were arrested by U.S. Marshals six days later and returned to Austin. Pitonyak said it was Hall's idea to dismember Cave's body, that she made a list of supplies (ammonia, gloves, a hacksaw) that Pitonyak then purchased at nearby Breed & Co. Pitonyak insisted he did not cut Cave's body; that, he said, was all Hall's doing, although prosecutor Bill Bishop later pointed out that Pitonyak's blood was found spotting the bathroom, along with Cave's. (Hall was called to testify but took the Fifth; she is awaiting trial on a charge of hindering the apprehension of a fugitive.)

Despite the eventual verdict, it seemed at least plausible that Pitonyak does not remember shooting Cave or stumbling into a neighbor's apartment at 3am, spouting nonsense about having been in a "gunfight" with "some Mexicans" – especially if he was drinking as much as multiple fifths of vodka a day and up to a case of beer, taking multiple doses of Xanax, and using cocaine – and if, while addled, he was recklessly handling the .380 double-acting pistol. It also didn't appear that the state had much evidence to firmly rebut Pitonyak's version of events – prosecutors offered little to suggest Pitonyak lied when he said he doesn't remember killing Cave or to discredit his assertion that he never would have done so intentionally. Instead, the prosecution was content to rely on the gruesome post-mortem scene and Pitonyak's acknowledged record of drug possession and gangster-wannabe behavior.

In her closing, prosecutor Stephanie McFarland suggested that no additional evidence was in fact necessary: "Action is the finger on the trigger," she said, and Pitonyak's guilt is evidenced by "the specific intent [to fire the bullet] that he formed in that second" before the bullet struck Cave. Yet if that is in fact true, most of the prosecution's case – garish details about the mutilation of Cave's corpse, countless gory crime-scene photos that sent Cave's mother weeping from the courtroom, the seemingly prejudicial photo of Pitonyak and Hall laughing and smiling for the camera while in Mexico – is irrelevant.

Minton and co-counsel Sam Bassett tried gamely to make that point – that if Pitonyak's story about drug-induced amnesia were possibly true, there would certainly arise the reasonable doubt necessary to acquit their client of intentional murder, regardless of how gory and unforgivable his actions were after Cave was already dead. But the trial seemed less focused on what killed Cave (or even why she died) than on the kind of gruesome sensationalism that evokes rubbernecking and a predetermination that the perpetrator must be an inhuman monster. That blindly righteous indignation was fed by more than one commentator on Court TV, which carried large portions of the trial live (with field reporter Jean Casarez in the courtroom). Indeed, had Pitonyak simply called the police the minute he found Cave's body, it is hard to imagine that Judge Flowers' courtroom would have been standing-room-only the day the accused took the stand or that Court TV would have seen the entire bloody affair as worthy of its precious, commercial-filled airtime. 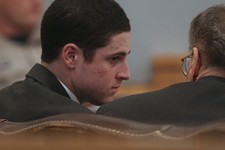 The Pitonyak Case: When is a private-property search justifiable?
Because evidence was illegally obtained, Colton Pitonyak's conviction should be tossed out, lawyers argue