Unknown number of immigrants languish in private detention center in Taylor; a small but growing group is working to make their situation public knowledge

Protesters outside the T. Don Hutto Residential Center in Taylor call for the release of an unknown number of "noncriminal alien families" incarcerated within. (Photo By Jana Birchum)

In October 2001, the Ibrahim family, Palestinians seeking asylum from life under Israeli occupation, entered the U.S. legally. The family's requests for asylum, in which members described repeated beatings at the hands of Israeli officials and health complications from gas attacks in occupied territories, were denied. According to their lawyer, John Wheat Gibson, Immigration and Customs Enforcement agents invaded the family's house after midnight on the night of Nov. 3, 2006, and arrested everyone inside. The entire family remains imprisoned today.

Salaheddin Ibrahim is currently separated from his family in a prison in Haskell, Texas. Hanan, his pregnant wife, shares a cell at the T. Don Hutto Residential Center in Taylor, Texas, with her 5-year-old daughter, while her 7- and 12-year-old daughters are together in a separate cell. Her 15-year-old son is alone in another. The Ibrahims' 3-year-old daughter, who was born since their arrival in the U.S. and is therefore an American citizen, is living with Salaheddin's brother, Ahmad Ibrahim, in the Dallas area. Ahmad says the family has been told they are to be deported, but they don't know when or to where. Applications to get them Jordanian papers have been denied, and ICE, a branch of the Department of Homeland Security, is apparently contacting the Israeli embassy – the country from which the family was seeking asylum in the first place – for papers. As it stands now, the family will remain in custody until its members are deported. "I just can't understand the jailing of 5- and 7-year-olds," Ahmad said over the phone as his 3-year-old niece's voice jabbered in the background. "They have done nothing wrong."

The Ibrahims are just one of the families being held in a 512-bed prison in Taylor, just northeast of Austin in Williamson County. There's no way of verifying exactly how many families are being held there, as Corrections Corporation of America, the private prison company that ICE pays more than $2.8 million a month to run the facility, is restricted by ICE from commenting on the population. According to ICE Enforcement Officer Nina Pruneda, a population breakdown cannot be released to the public due to – you guessed it – "reasons of homeland security."

This much is known: As a result of 1996 immigration-law amendments that mandated the detention of certain immigrants and asylum seekers, ICE now detains more than 200,000 people annually at more than 300 sites, most of which are county jails. Immigration detainees make up the fastest-growing group of people incarcerated in the U.S. and, according to many critics of the burgeoning private detention industry, one of the fastest-growing ways to make a buck.

The agreement between ICE, CCA, and Williamson Co. is as follows: ICE pays CCA $2.8 million per month for up to 512 prisoners (plus $19.23 per hour for off-site guard services, $125,000 per month for medical care, and contraceptives, immunizations, and off-site medical care billed at additional cost). On top of that, ICE pays $79 per day extra per head plus $8 for medical care. Meanwhile, as part of its Intergovernmental Service Agreement with CCA, the county collects $1 per prisoner (child or adult) on a monthly basis – a total of up to $500 a month, in theory. A growing grassroots movement has been staging vigils and protests to try to shut down what it calls the Hutto prison camp; they were focused on this month because the county's contract with CCA was set to expire Jan. 31 (though in April 2006, Williamson Co. commissioners approved the prison contract with ICE "indefinitely unless terminated in writing" with 120 days notice).

As word of the incarceration of "noncriminal alien families" (ICE's term) spreads, the number of outraged citizens grows. "We just didn't know about it," said Williamson Co. resident Jane Van Praag. "When we heard what was going on and did a little research, it turned out that what sounded pretty bad was really bad." Van Praag drafted a letter to the Williamson County Commissioners Court, which she read aloud to the commissioners at a recent meeting, asking that they not renew their contract with the Tennessee-based CCA. In her letter, she pointed to Congress' mandate (in the Department of Homeland Security Appropriations Bill) that the DHS exhaust all other alternatives to detention, such as the Intensive Supervision Appearance Program. "I urge the Commissioners Court to hold ICE accountable and request that ICE prove it is complying with what Congress intended," Van Praag implored the Commissioners Court. "We need to know if ICE has exhausted all of the alternatives to detaining these children and families before you renew this contract."

Led by Texans United for Families, an umbrella organization made up of advocacy groups such as the American Civil Liberties Union, Grassroots Leadership Initiative, League of United Latin American Citizens, and Texas Civil Rights Project, a relatively small group of people is working to ensure that the plight of families in the T. Don Hutto prison is not forgotten. TUFF organized a third vigil on Jan. 25 at the facility, to encourage the court to heed their demands. Twenty-five people, including Van Praag, ACLU members, and neighbors who live directly across the railroad tracks from the facility, gathered with lit candles and signs demanding an end to the imprisonment of children. "We have gone to the [court]; we have presented them with all the information that we have," said Jay J. Castro Sr., one of TUFF's most vocal organizers. "If they still choose to renew the contract, we will not give up. Our outrage will only grow stronger."

Indeed on Jan. 30, the Commissioners Court decided to renew the contract with CCA for another two years, revising it to allow for termination at any time and adding that CCA "shall provide education in accordance with all state and federal education standards and guidelines to any child housed at the facility." The Commissioners Court also pointed out that, during this first year of the contract, CCA has made improvements and changes in "order to better accommodate the families during their stay while awaiting the outcome of their immigration hearings or return to their home countries," including a contract with Lone Star Circle of Care for ob-gyn care and a menu that reflects "cultural and medical needs and diets."

"As a result of the protests and related media attention, the conditions in the facility have changed," says ACLU's Rebecca Bernhardt, who has toured the facility. "We know that the education, in particular, has received a major overhaul. Children are now receiving four hours of education a day, instead of just one hour." But Bernhardt is quick to point out that while these recent changes are good, they're not enough. "It's the lipstick on the pig problem," she says. "No matter how humane they make Hutto, the question still remains: Is it acceptable for the United States to imprison children, criminal or non? No, it's not. These families shouldn't be in prison." 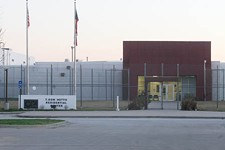