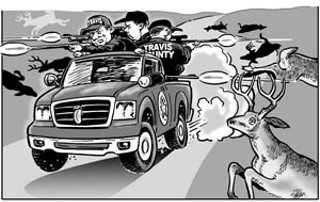 Travis County may have discovered a way to combine redneck and gangsta cultures, through gunplay no less – all in the name of deer-population control.

On a regular basis, according to a former Travis Co. park ranger, rangers and other county personnel engage in "culling hunts" that combine a good-ol'-boy gone-to-heaven scenario of blasting buttloads of baited deer on a private, well-stocked deer lease with that notorious neighborhood recreation popularized by the Bloods, Crips, and many a hardcore rapper – the drive-by shooting. Sociological epiphanies aside, the deer hunts – more accurately described as deer slaughters – may violate both state law and the traditional ethics of hunting. County officials insist that the hunt practices are not only legal and ethical but represent the best available option for thinning swollen northwest deer herds.

The culling or "control" hunts – which require special permits for the killing of large numbers of deer to reduce overpopulation – take place as often as twice a week between October and February, both during and outside deer season. Before dawn on hunt days, park rangers in Travis County's Pace Bend Park ensure the park is cleared of visitors, close off entrances, and scatter deer feed in the center of the 3-mile road that loops throughout the 1,368-acre park. At first light, a county pickup truck starts slowly down the road, with two or three shooters in the bed. The shooters take turns downing deer as they're spotted feeding in the road; the deer are left where they fall until rangers drive the entire loop. Some deer reportedly survive the initial shot and drag themselves back into the brush or lie wounded and suffering on the roadside. While rangers collect most of the downed deer, some are allegedly left alongside the road or are never tracked beyond the vantage point of the truck, so they either fall victim to scavengers like buzzards and coyotes or simply perish and rot. And though county population-control hunts are known for donating harvested deer meat to organizations combating hunger, some portion of the Pace Bend venison is reportedly taken for rangers' personal use – with backstrap appearing on plates at post-hunt barbecues and trophy antlers reported to have found their way to walls of rangers' homes.

This recounting of the culling hunts is according to a former county park ranger, John Wilkinson, who came forward as a whistle-blower last month. Wilkinson says he personally witnessed several of the hunts during his time as a ranger, from 2002 to 2005. He says he raised concerns then about whether the culling procedures were ethical or even legal but was told to keep his observations to himself. Now, his calls for an end to the hunts and discipline for those responsible – lodged with the Travis County Commissioners Court, Texas Parks and Wildlife Department, and Travis County Sheriff's Office – have led to several investigations. Wilkinson believes the hunts violate multiple Texas Parks and Wildlife rules and even state penal codes. He adds that park ranger supervisors not only orchestrate the hunts but recruit nonranger county staffers to join in gang-shooting the deer, and he questions the county leadership that has condoned what he calls "Wild West, buffalo-hunt antics."

Deer overpopulation is undeniably a persistent problem in Central Texas, particularly northwest of Austin, but Wilkinson insists that what's going on at Pace Bend is dangerously counterproductive. "The practice of training deer to feed on a public roadway during pre-dawn hours invites tragedy for the many commuters who travel park roads daily," he wrote in a letter to the Commissioners Court. Wilkinson also objected to the hunters' firing of weapons from pickups on the public park roads (a jailable offense for civilians) and to the abandoned carcasses he says he witnessed (another citable offense). He characterizes this "waste of game" as a consequence of pure laziness on the part of rangers, a number of whom he describes as "very out of shape and incapable of minimal physical activity." Park ranger supervisors planned and directed the hunts, Wilkinson says, with the attitude that "we have this culling permit, it's our park, and we can do things as we see fit."

Although county officials say they're investigating Wilkinson's complaints, they generally characterize them as unjustified and Wilkinson himself as a disgruntled former employee. Wilkinson denies that, saying he's simply trying to accomplish from outside the county what he couldn't sufficiently influence on the inside. See "Ranger Whistle-Blower," p.28.

Maj. David Sinclair, chief wildlife enforcement officer for Texas Parks and Wildlife, a 34-year veteran, said much of the culling-hunt procedure sounds "standard," though he was troubled by reports of deer left for dead. "If there is in fact some waste of game, that's inexcusable." He explained that hunters are required to "make a reasonable effort to retrieve a downed deer and keep it in edible condition." Even in the brush, Sinclair said, hunters are expected to spend a significant amount of time scouring the area and tracking a wounded deer until hair or blood trails are lost. 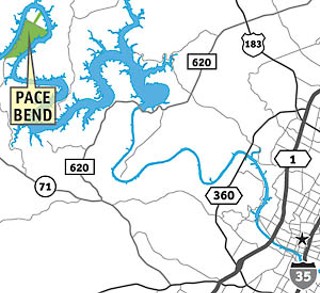 Because Pace Bend Park is effectively closed during the culling hunts, Sinclair says he believes its roads are no longer considered public and that "hunting for deer from vehicles is legal on enclosed land or land closed to the public," though he was uncertain whether the park's culling permit specifically allows it. Sinclair added that dispensing bait on a private road is "not against the law." (Asked about civilian busts, Sinclair said that in 2005, nearly 120 people were arrested statewide for hunting from vehicles on public roads.)

Travis Co. Judge Sam Biscoe says he took Wilkinson's allegations seriously and referred the matter to the county Transportation and Natural Resources Department, which oversees park operations, and to the sheriff's department, which has jurisdiction over commissioned law-enforcement officers (including park rangers) as well as firearms issues. "Initial investigations found that the allegations weren't wholly true," Biscoe said, but investigations are ongoing. Officials at the sheriff's department say the matter's been referred to the Travis County Attorney's Office. Assistant County Attorney Tony Nelson said investigations by the TNR and sheriff's departments are ongoing but that neither has uncovered any wrongdoing so far.

Joe Gieselman, the executive manager of TNR, said Wilkinson's complaints are likely "associated with his former employment." Gieselman declined to discuss personnel matters surrounding the ex-ranger's voluntary departure from the county but acknowledged that retaliation could be a possible motive for his allegations. Gieselman emphasized that culling hunts, conducted both at Pace Bend Park and on the Balcones Canyonlands Preserve, are structured and supervised based on written internal procedures in county permits. "I sign these permits before the hunt," said Gieselman, "and they're specific each year to who's hunting and under what conditions."

Gieselman said the county's investigation had not yet returned findings on the waste-of-game allegations, but the claims that staff members had taken meat or trophy antlers for personal use were found to be unsubstantiated. "The entire carcass goes to Hudson's [Meat Market]," he said. (Hudson's provides discounted deer-processing to the county as part of the Hunters for the Hungry program, donating harvested meat to nonprofit service organization Caritas of Austin.)

Asked about the legality of hunting from the park road, Gieselman said, "We're still trying to determine whether it meets the state law's definition of a public road." He believes sealing the road to visitors meets the spirit of the law – that is, prohibiting hunting from a road actively being used as a public thoroughfare. Should county legal counsel conclude that Pace Bend's road is in fact always public, Gieselman said, "We will change our procedures." While all of the hunters listed on his permits are county employees, Gieselman said not everyone is a ranger or law-enforcement officer. Hunters are "involved in park operations in some form or fashion," he said. "Basically we're looking for marksmen ... people who've taken a gun-safety course and are good at hunting deer. ... This is not a sport – we're doing this for professional reasons, so we don't want somebody out there just because they want to go hunting."

Joe Doggett, a hunting columnist for the Houston Chronicle, has been an avid hunter for 35 years. He stressed that the culling hunts in Pace Bend are not "sporting" hunts but are intended to "take care of business" and "kill as many deer as possible." Luring the deer into the open road "could be the most effective way" to accomplish the goal. He said baiting is commonly done with stationary grain feeders but isn't uncommon on private roads. But he added that "leaving [dead] deer out there creates a black eye," if indeed that does happen.

"It's important that whatever [deer] population controls are done be done humanely and legally," said Myron Hess, legal counsel for the National Wildlife Federation. Hess emphasized the necessity of deer-population control, explaining that overpopulation can result in landscape degradation and massive starvation-related die-offs. Herds swell in numbers thanks to deer's inherent resiliency and an absence of historical predators, he said, compounded by the trend of sprawling development overtaking wildlife habitat and deer adapting to live around humans. While Lakeway has used trap-and-relocate methods to control deer numbers, Hess said there is no single, ideal solution.

Deer numbers on county property are estimated through a series of nighttime, spotlight-aided census counts along selected routes each October, explained John Kuhl, Travis County's environmental officer. TP&W calls 15-20 acres per deer ideal, said Kuhl, but "this year we've had numbers as low as 6 acres per deer." Excess deer threaten overall biodiversity, he said, including food prospects for protected songbirds and the propagation of valuable new oak trees. As one of the hunt's original planners in 2003 and a frequent participant, Kuhl called Wilkinson's waste-of-game allegations "perhaps the most insulting."

"We're dedicated to the humane and prompt dispatching of the deer," Kuhl said. Deer hunters are traditionally taught not to approach a wounded deer for a short period, until it "beds" or falls down, Kuhl noted, as it often has enough energy to inflict harm. If a deer isn't downed in the road, he said, the area where it was hit is flagged before the truck departs. As for the practice of roadway baiting, he said the park's 25 mph speed limit makes it more likely that a deer would run into a car than vice versa. (While culling hunts are also conducted in Reimers Ranch Park and the Balcones Canyonlands Preserve, Pace Bend is the only place where road-baiting is used.)

Kuhl recalls working alongside Wilkinson, calls him a good employee, and said he was disappointed to see him go but described his claims as "purely retaliatory." Noting that most of Wilkinson's written allegations are "neatly aimed at the law-enforcement end of the operation" as opposed to the natural resources arm, Kuhl suggested the complaints may have more to do with Wilkinson's rangers-related frustration than with the hunt itself.

For more about Hunters for the Hungry, the nonprofit that helps put game from Pace Bend and across the state on the plates of those in need, see www.tacaa.org/HFTHhome.htm, or call 800/992-9767 x506.