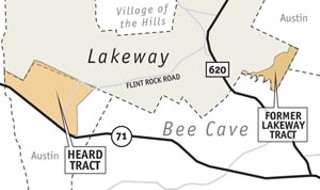 The Village of Lakeway is debating big-box development on the Heard tract at RM 620.
View a larger map

A battle is brewing in Lakeway over putting a big-box store on city-owned land on State Highway 71, land the city desperately wants to develop to provide much-needed sales-tax revenue to the city's home-heavy tax rolls.

Back in 2003, a group called Lakeway First led a campaign to stop a 600,000-square-foot development of a Wal-Mart Supercenter and Lowe's Home Development on 100 acres on RM 620. Voters passed a nonbinding referendum to oppose big-box retail stores. Developers then turned away from Lakeway and concentrated efforts on the village of Bee Cave, which is now a mecca to big-box retailers in a grove adjacent to City Hall.

In Lakeway, on the other hand, "not being Bee Cave" has become a badge of honor among some of the lakeside residents, even as the two towns sit, indiscernibly, side by side on Highway 71. Over the summer, though, Austin agreed to swap the 400-acre Heard tract on Highway 71 to Lakeway for 100 acres of preserve land on RM 620, and city officials launched a new effort to put development in motion on the tract.

It won't be a 200,000-square-foot Wal-Mart, like they fear at Northcross Center, or even one of the many big-box retailers that cluster at the Shops at the Galleria in Bee Cave. Austin has limited impervious cover on the tract to 25%, which means the city can put no more than one 120,000-square-foot retailer, possibly an HEB, on site.

That's still more than many Lakeway residents can stomach. At a recent meeting of Lakeway's Zoning and Platting Commission, a string of frustrated residents were angry the city even brokered talk about big-box retail, though Chair Hester Currens gently reminded members of the outraged group that they were probably shoppers at the Target and Lowe's in nearby Bee Cave, shoring up that nearby city's overflowing sales-tax coffers. Resident David Bryce, asked by ZAPCO Commissioner David Taylor to explain his opposition to big-box retailers, said allowing one would be opening a Pandora's box to big-box retailers in the city. Christy Muse of the Hill Country Alliance said Highway 71 at Hamilton Pool Road was intended to be a rural Hill County roadway and was never envisioned to be another U.S. 183 with its long string of cheaper big-box retail.

Chris Wilson accused the city of giving more credence to the developers who had approached them than to the city's own residents, noting the city's willingness to build a 560,000-square-foot community, the Summit at Lakeway, even after residents told city leaders they wanted smaller development. Once more, the city was going to make the code follow the development deals it cut, Wilson said. "Again, it's the developers telling you what your community should look like. … You have an obligation to listen to what your community wants."

Former ZAPCO Chair Don Carges, on the other hand, warned the board about unintended consequences. The fact that residents want no development bigger than 100,000 square feet not only has stopped retailers, he said; it's also stopped any possibility of a local hospital in Lakeway.

The meeting was an exercise in cross talk, one that's been repeated time and again in Austin. Residents don't want (fill in the blank: an apartment complex, high-density retail, a big fat superduplex). The governing board, wrestling with the code on how to either consider or dump a particular proposal, lands on a process, and the residents leave the meeting angry and frustrated.

In this case, Lakeway's ZAPCO did not intend to make a final pronouncement on big-box retail. Instead, its members struggled with the idea that big-box retail should either be a new zoning category that the Board of Adjustment could approve or reject or a special-use district under an existing zoning category that council could approve. Clearly, ZAPCO preferred the decision to land at council, but some members were uncomfortable with even the appearance of moving forward with a big-box zoning category.

By the end of the meeting, the discussion was no longer about big-box or no big-box. It was about who was going to make the decision. Unable to land on one, even by limiting the special-use permit to Highway 71, ZAPCO postponed further discussion until February.