Who Squared the Circle at 31st and West? 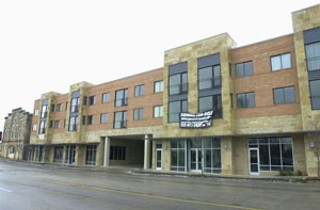 Could city management be "punishing" the Heritage Neighborhood Association for its successful lawsuit against the city?

That's what many in the neighborhood are wondering, according to Jolene Kiolbassa, a member of the HNA steering committee. In October, HNA won a lawsuit against the city of Austin; a judge found that the city had erred in issuing a building permit for an expansion of the Buckingham Square Apartments at West Avenue and 32nd and ordered the city to pay $10,000 toward HNA's legal bills (owner Buckingham Investments was ordered to pay another $20,000). As Assistant City Manager Laura Huffman and her boss, City Manager Toby Futrell, were ultimately responsible for the city's erroneous application of its own ordinance, the legal judgment did not make them look good.

During the same period, over the past two years, the HNA has also been asking the city to approve a traffic-calming device in the neighborhood. A $30,000 check to cover the costs of a traffic circle was pledged by Joe and Peter Lamy of Capital City Partners, developers of Guadalupe 31, the vertical-mixed-use poster-child project on Guadalupe between 30th and 31st. (Designed by Austin's Dick Clark Architecture, the three-story project features 38 condos above 18,000 square feet of ground-floor retail; Mayor Will Wynn is scheduled to bless the project – which exemplifies desirable features codified in the city's new Commercial Design Standards – at a Jan. 20 grand opening.)

HNA had agreed to zoning concessions in exchange for the developer's willingness to respond to its concerns; one of those concerns was the traffic impact. The resolution, collaboratively reached by the Lamys and HNA in May 2005, was that the developer would pony up $30,000 for a traffic circle at 31st and West – the closest four-way intersection to the Guadalupe 31 parking entrance on 31st. According to Kiolbassa, that intersection has a long, documented history of traffic accidents.

"This solution offers a great new model for public-private partnership in Austin, as a way to pay for needed traffic-calming devices in neighborhoods," Kiolbassa said. Given that the city cites a waiting list of 168 neighborhoods requesting traffic-calming devices (with no funds in the city budget to satisfy the requests), a fresh source of funding seems needed. Given that the city also is actively encouraging increased density along major corridors in existing neighborhoods (through neighborhood plans and the new commercial Design and Mixed Use Standards ordinance), the public-safety imperative for traffic-calming promises only to become more acute. So, why not actively encourage developers, as a "density bonus" offering to the community, to underwrite the costs of mitigating the traffic impacts of their high-density projects? As policy, it would seem like a no-brainer.

Kiolbassa concedes that HNA made a naive tactical error in not involving the city in its original agreement with the developer. Since then, HNA's request for city assistance in implementing the traffic circle has failed to find a receptive response. Kiolbassa described the city's reasoning as maddening, circular, and nonsensical. A personal meeting with Futrell got them nowhere. Even though the cost to install a traffic circle (estimated by the city at $20,000) would be fully covered by the developer's funds (requiring not a dime of city funding), Assistant City Manager Rudy Garza stated repeatedly in a Dec. 5 memorandum to the mayor and council, "We do not recommend installation of a traffic circle in the Heritage Neighborhood."

City Council Member Brewster McCracken had championed the traffic circle and lined up the council votes (with Lee Leffingwell and Sheryl Cole as co-sponsors) to approve it at council's Dec. 14 session. But Garza's memo (reportedly sent at Futrell's behest) "scared off" the council votes needed, according to Kiolbassa; McCracken confirmed that he had no choice but to pull the item from the agenda. Council Member Jennifer Kim's office now is working on the issue.

Sources close to City Hall confirmed that the awarding of traffic devices (including stop signs) to specific neighborhoods long has had a political aspect. Those intimately familiar with the city manager's style found it fully believable that HNA is being "taught a lesson." Said one source, "It's her total m.o. You get on board, or you have a very miserable go of it."

Futrell responded that she was not aware that the Heritage NA had sued the city and that she had no memory of the recent $10,000 judgment. (To refresh the city manager's memory, the public record indicates she was present at several council executive session discussions of The Heritage Neighborhood Association and Simon Atkinson v. Buckingham Investments, Ltd. and the City of Austin.) Since city guidelines call for traffic-calming systems to be installed in entire neighborhoods based on comprehensive plans, said Futrell, "We don't put in a single traffic-calming device." She confirmed, however, that no funds are available in the city budget to conduct traffic-calming planning or to install neighborhoodwide systems, which she said cost $150,000-300,000.

Attorney Mark Perlmutter, an HNA resident who represented the neighborhood in its lawsuit, sent his own letter to council and the mayor on Jan. 15 that responds point-by-point to the "five primary factors" cited by Garza in his no-go recommendation memo. (The factors stated in Garza's memo appear in bold below. Excerpts from Perlmutter's response follow in italics.)

1) "There are an existing 168 neighborhoods on the 'waiting' list for traffic calming." "If a ship is going down with 168 passengers and there is one life jacket bought and paid for by a passenger, why shouldn't that passenger get to use it?"

3) "Installation of a single traffic circle will impact traffic on other adjacent neighborhood streets." "This is a bald-faced assertion, and assumes that the impact would be bad. I don't seriously expect that this one traffic circle will cause substantial numbers of people to take a different route. That slight consequence is far outweighed by the increase in safety on West Avenue due to slowing the traffic down."

4) "Developing a traffic calming program based on available private funding will create an inequitable program with no available city funding." "In answer to those who might raise a complaint, the response should be, 'The Heritage Neighborhood situation was a unique case in which they were given the right to a traffic circle in exchange for making concessions to a condo project … that would increase traffic through the neighborhood.' Shouldn't the city be encouraging developers to compensate neighborhoods for their intrusions instead of the city's footing the bill?"

5) "Installation of a traffic circle will result in increased response time for public safety first responders, including the inability for an AFD Ladder Company to safely pass." "The only houses for which response time would be increased are the few houses on the two blocks between West Avenue and Lamar on 31st. Balance that almost non-existent safety risk [of a 13-second delay in response time, I've timed it] against the odds that someone speeding down West Avenue would hit one of our children."

According to Garza's memo, the city has offered HNA (as a kind of consolation prize) that it would agree to use and match the developer's funding to build sidewalks in the neighborhood – oddly, with no apparent concerns about neighborhood equity, even though sidewalks also are highly coveted by many waiting neighborhoods. But HNA wants the money to be used for traffic-calming as intended, said Kiolbassa, to mitigate the real traffic dangers at the 31st and West intersection, an area now populated by many families with young children.

Garza said of the $30,000, "It's clearly not adequate to install the appropriate and correct traffic-calming program in that neighborhood." He added that in drafting his no-go opinion, "I knew nothing about any lawsuit or judgment. That's not how we do things at the city of Austin."

Political vendettas aside – and ultimately more disturbingly – the city seems stuck in a mindset of substituting narrow engineering formulas (and bureaucratic protocol) for true judgment and creative thinking on urban planning needs. The $30,000 pledge by the developer was good for only two years; it expires in May. With time now running out, will the city walk away and leave this significant chunk of change (and model for future public-private financing) on the table? Or can the city get over its own traffic humps?