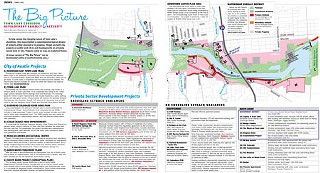 Download a PDF of the map
To help convey the changing nature of Town Lake's shorelines, this map provides a comprehensive look at dozens of projects either planned or in progress. Shown are both city projects on public land (A-G) and developments on privately owned land (1-24). Projects noted on map are explained below.

Within the WO District, all shoreline land that fronts directly on Town Lake (or on its contributory creeks) is protected as open space by city ordinance; the ordinance prohibits new development within primary (red on the map) and secondary (orange) setbacks (of varying widths).

This area along the north shore of Town Lake, between I-35 and Lamar, is included in the new urban plan for Downtown Austin being developed by ROMA Design Group, to be completed by the end of 2007. The corresponding south shore of Town Lake is not included – but maybe it should be; it was the subject of ROMA's 2000 study (see p.27).

Closing the roughly 2-mile gap (between the Statesman and Town Lake Metro Park) in the otherwise continuous loop of the shoreline hike-and-bike trail is a multimillion-dollar project that PARD and trail advocates would love to get done. In some spots, a boardwalk over the water would be needed. The recent bond election included $1 million for other trail repairs and improvements. See www.townlaketrail.org.

Surrounding the new Palmer Events Center and evolving Long Center is a 54-acre parcel of Town Lake Park. To be completed this spring is the "urban edge" portion (between Barton Springs Road and Riverside); it's receiving about $7 million in park improvements that include fountains, a pond, walking paths, and open green areas. A future phase will improve the parkland between Riverside and the shoreline. Overall, TLP refers to all city-owned land on both sides of the river (between Cesar Chavez and Riverside Drive/Barton Springs).

In converting the Downtown segment between Cesar Chavez and Brazos to a two-way street, nearly a half-acre of Town Lake Park (between the street and the river) was lost. To compensate, the project includes park improvements: new planting beds, park benches, 40-50 new trees, and a handsome waterfront pedestrian promenade.

Phase I is finally under construction; it includes a two-story story education/exhibit/rehearsal/office building and outdoor plaza. Ultimately the long-awaited $50 million MACC will include a 300-seat theatre, an 800-seat theatre, and a garage. Programming will include Latino visual arts, theatre, dance, literature, music, multimedia and culinary arts. (Phase I Completion: Spring '07.)

After the plant is decommissioned and demolished, this city of Austin property is slated for redevelopment, with a new infrastructure of streets. Site has been selected for the new Downtown Austin Public Library.

1300 E. Riverside Dr. (Site: Wellesley Inn & Suites)
High-end condominium project (254 units) with four buildings, the tallest of which will be 11 stories (110 feet). Phase I Construction to begin mid-2007. Proposed as 18-story residential tower, with a stepped-down height of 40 feet closest to Town Lake. Developer: Constellation Property Group. Note: PARD has negotiated a 20-foot trail easement along Town Lake. Constellation also will grant an easement to the city to extend the hike-and-bike trail under I-35 (and has donated $250,000 toward the cost of building the boardwalk extension). WO Variance requested to allow a water quality pond within the primary setback.

208 Nueces
Expansion from 22,000 square feet to about 42,000 square feet. Developer: Direct Events, with Novare Group/Andrews Urban. WO Variance requested to allow addition within the primary setback from Shoal Creek.

3) Bridges on the Park

Future: Second tower with mixed-use and high-rise residential project planned on the site

Northwest corner of Lakeshore Boulevard and Riverside (by Radio Shack)
Planned mixed-use project with 10,000-square-foot retail below 45 townhomes and up to 375 apartments. AMLI plans to dedicate a parkland easement along shoreline to extend TL Trail and will pay to construct it. Land under contract. Required setback of 100 feet will be observed by AMLI.

Lakeshore Boulevard at Tinnin Ford Road
Existing multifamily development converting to a mixed-use development. The proposed high-density "urban village" on the east side off Lakeshore Drive would be large enough to require new streets and its own public-utility district. Variance requested to allow development within a critical water quality zone.

28-story tower; will include 190 apartments (under construction).

22) The Lofts on Shoal Creek

This four-acre project includes a 195' condo tower (sited about 500 feet from Town Lake) and a 10-story, 314-unit apartment building. The needed height variance was unanimously approved at city council in Feb. 06. New streets are being constructed through the site; both projects will have ground-floor retail.*

*Oops! The following correction ran in the February 2, 2007 issue of the Chronicle: In the map of the Town Lake Corridor in the Jan. 19 issue ("The Big Picture," p.28-29), the location of the Spring condominium project is incorrect. The project on that site is Gables Park Plaza, a 4-acre project to include a 195-foot condo tower sited 500 feet from Town Lake. Spring is directly north, across Third Street (between Lamar and Bowie). The online version of the map has been corrected. The Chronicle regrets the errors.