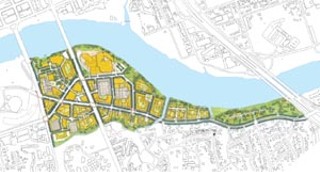 What Roma Saw: In its 2000 study, Austin's urban-planning consultants envisioned the South Shore Central area redeveloped with low-rise buildings and a new grid of streets, to foster a human-scaled, walkable neighborhood with shopping, offices, and restaurants.

ROMA identified "two principal impediments" to redevelopment of the South Shore Central subdistrict, which it nevertheless characterized as "a great opportunity for the City of Austin." The first problem was inadequate existing development regulations. The second was a lack of public infrastructure, specifically a framework of streets around which more intense development could occur.

To address root issues – the same problems that persist today – the report recommends a sweeping rezoning of the entire area (except for the Austin American-Statesman property, just east of Congress) to a single mixed-use, base zoning allowing the equivalent of one-story buildings (1-0 F.A.R. or floor-to-area ratio). That's far less than the 35-foot to 200-foot building heights allowed on individual tracts now under the existing patchwork of tract-by-tract zonings. Significantly, higher buildings (to a maximum of 120 feet) would have to step back gradually from the water's edge; just 20% of a building could rise taller than the one- to two-story base zoning height. Basically, it's a low-rise vision – although ROMA principal Jim Adams says that today, upon more detailed study, he might well recommend higher densities and buildings. (Architect Sinclair Black, who also has studied this area, would prefer to see it all rezoned Central Business District, which currently allows an 8-1 F.A.R.)

To earn the right to build bigger and taller, ROMA recommended, property owners would have to chip in toward the public good (as with the "density bonuses" now being pursued for Downtown) and help execute the master plan. ROMA called for "a coordinated plan, schedule and implementation program including financing provisions" to apply to all property owners to "assure realization of continuous shoreline access, open space, and waterfront setbacks." In the initial ROMA proposal, all of the individual property owners would have had to agree on collaboratively providing shared parking structures, a new grid of streets, pedestrian amenities, and better streetscapes. City staff members who were involved in 2000-2001 say that a purely voluntary coalition of property owners proved unrealistic.

• Revise use and setback provisions "to provide more flexibility and encourage redevelopment of aging properties." ROMA suggested setting an average and minimum setback, rather than a primary and secondary setback.

• Revise building step-back requirements, so they ensure "a stepping down of development toward the waterfront."

• Establish incentives for private property owners to cooperatively contribute to a "public framework"; ROMA suggested that height and density "bonuses" could be awarded to projects that achieved "clear public objectives" such as shoreline access, open space, shared parking, and additional streets.

• Develop streetscape standards to upgrade the look of the major roads.

You can download a PDF of the 2000 ROMA Austin Town Lake Corridor study from the city Web site, www.ci.austin.tx.us/parks/parks.htm.

The Town Lake Variance Shuffle
The hike-and-bike trail, questionable developer tactics, and a potential windfall for urban parks all flow together on East Riverside Drive 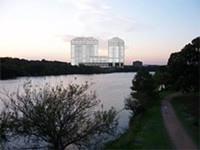