• On the last day of 2006, the total number of U.S. combat casualties in the war on Iraq officially reached 3,000 since March 2003, with the death of 22-year-old Dustin Donica of Spring, Texas. More than 22,000 U.S. troops have been wounded. There is no official estimate of civilian casualties, but the most scientific study, reported in October by The Lancet, gives an estimate of more than 650,000 Iraqi civilian deaths.

• The 80th Texas legislative session gavels to order Tuesday, Jan. 9, and as of this week, nobody knows who will be holding the gavel on the House side. Incumbent House Speaker Tom Craddick has been challenged by Plano Republican Brian McCall (and a couple of others), and at last report Craddick was having trouble herding his "confirmed" support. See "All Eyes on Speaker Fight."

• On Thursday, Dec. 28, Austin Police Department Officer Gary Griffin was terminated by APD Chief Cathy Ellison for his actions in beating a mentally retarded man, Joseph Cruz, after finding him asleep at a Seventh Street bus stop July 1. A grand jury declined to indict Griffin, but Chief Ellison said he had failed to identify himself, had used excessive force, and failed to tell the truth in his report of the incident. Ellison also disciplined three supervisors for failing to take corrective action. See "Excessive Force Firing."

• Austinites rang in 2007 with the second annual First Night celebration on New Year's Eve, including singing, dancing, parades, music, and fireworks all over Downtown.

• A Travis Co. grand jury indicted on Dec. 27 14-year veteran APD Detective Andrew Perkel on one count of attempted sexual assault (a third-degree felony), one count of public lewdness (a class-A misdemeanor), and one count of indecent exposure (a class-B misdemeanor) in connection with a Sept. 15 off-duty "incident," according to a statement released by APD. Reportedly, the alleged offenses took place at hair-removal business American Laser Center and involved an encounter between Perkel and an as-yet-unnamed Laser Center employee. Perkel's attorney, Chris Gunter, told the Statesman that the charges are "not true," that everything "that transpired between these two people was consensual," and that he and his client "are anxious for a trial." APD officials have placed Perkel on temporary suspension with pay pending the outcome of the criminal case and of an administrative investigation by APD Internal Affairs detectives. – Jordan Smith

• The Austin Area Regional Transit group made a presentation of its regional rail transit concept, dubbed the Spider, to a subcommittee of the Planning Commission on Tuesday night. (See asnic.utexas.edu/~bennett/aart.htm for background on the AART concept.) While the future of the Seaholm curve is still in doubt, another question appears to be emerging: Will there ever be east-west rail access across Downtown? Also, it appears that a proposal will be made to merge the city's sustainability project efforts with CAMPO's regional growth concept and some kind of regional rail vision, presenting a true meta-vision of the region's future. – Kimberly Reeves

• Keep Austin Beautiful, the local nonprofit that encourages Austinites to take personal responsibility for enhancing their community environment, has announced the winners of its 22nd annual* Keep Austin Beautiful Awards*. The Town Lake Trail Foundation took honors in the beautification category for its restoration of Lou Neff Point (the spot where Barton Springs meets Town Lake), among other scenic, degraded spots. For Community Involvement, the Austin Parks Foundation was recognized for its ongoing Shoal Creek Trail restoration, which has so far involved 1,600 hours of work from 526 volunteers during 26 workdays. The city's Watershed Protection and Development Review program grabbed the Education prize for its Grow Green native and water-wise plant guides and its Earth Camp kids program. Rene Barrera, manager of the city's nature preserves, received the Dennis Hobbs Individual Achievement award. Austin Energy got the Industry Leadership award for the new Mueller Energy Center, an ultraefficient natural-gas power plant capable of providing 100% of the electricity, heating, and air conditioning needed for the new 475,000-square-foot Dell Children's Medical Center by capturing and reusing exhaust heat - one of very few plants nationwide able to remain operational during electric grid failure. Urban sustainability pros the Rhizome Collective won the Litter Abatement prize for its two-year East Austin brownfield cleanup effort, which has included such innovations as biofuel and solar-powered equipment and yielded more than 31 tons of recyclable material. Honored for Recycling and Waste Reduction was Austin's Habitat for Humanity ReStore, which accepts and re-sells building materials, as well as deconstructs and recycles buildings as a demolition alternative. And finally, Clint Small Middle School and Gonzalo Garza Independence High School won the Freescale Youth Achievement Award for their litter cleanup, campus beautification, composting, and habitat restoration efforts. Tickets to the Feb. 7 awards ceremony are available at www.keepaustinbeautiful.org or by calling 391-0622. – Daniel Mottola

• Williamson County rang in the new year with 15 elected officials taking the oath of office, many for the first time, in the 277th District Court in Georgetown. Family and friends attended to express their love and support, and more than one official thanked the outgoing commissioners for leaving the county in good financial shape. Rep. Dan Gattis Jr. presided over the induction ceremony, which included the swearing-in of his own father, Dan Gattis Sr., as the new county judge. Also taking the oath of office were Judge Burt Carnes, 368th District Court; Judge Suzanne Brooks, County Court at Law No. 1; Judge Tim Wright, County Court at Law No. 2; Judge Don Higginbotham, County Court at Law No. 3; Judge John B. McMaster, County Court at Law No. 4; Lisa David, district clerk; Nancy Rister, county clerk; Vivian Wood, county treasurer; Joe Baker, county surveyor; Commissioner Cynthia Long, Precinct 2; Commissioner Ron Morrison, Precinct 4; Justice of the Peace, Precinct 1, Dain Johnson; Justice of the Peace, Precinct 2, Edna Staudt; Justice of the Peace, Precinct 3, Steve Benton; and Justice of the Peace, Precinct 4, Judy S. Hobbs. Distinguishing himself as the realist in the group, Morrison said he became "scared" when it occurred to him Commissioners Court is now a majority of freshmen with one sophomore (referring to Lisa Birkman, Precinct 1). Morrison should take heart; it takes time and experience to engender the expanse of controversy in which the county has found itself in the last couple of years: a sexual-harassment settlement against outgoing Commissioner Greg Boatright; a contentious sweetheart water-plant deal orchestrated by outgoing Commissioner Frankie Limmer; a civil rights lawsuit against outgoing Judge John Doerfler and Judges Brooks, Higginbotham, and Wright; a lawsuit against Sheriff James Wilson by former lieutenants Barry Simmons and Ralph Fisher that looks like it's destined for trial next month; and a lawsuit by Precinct 1 Constable Gary Griffin against the entire court for violating the Texas Constitution now before Austin's 3rd Court of Appeals. The new female majority now sitting on Commissioners Court is indeed historic – Valerie Covey was elected in November to replace the late Tom McDaniel, commissioner Precinct 3, and, with Birkman and Long, now forms WilCo's new femme-triumvirate. But whether the "good ol' boy network," for which WilCo is notorious, will simply cede power to a "good ol' girl network" that acts in concert, rather than according to individual conscience, remains to be seen. – Patricia J. Ruland 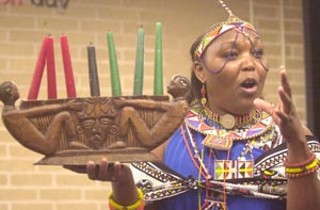 Elizabeth Kahura explains the significance of "the seven candles" as part of a Kwanzaa celebration at Carver Library on Dec. 27. The Kwanzaa holiday was founded in 1966 by Dr. Maulana Karenga, and according to organizers of the Carver celebration, it "is neither political nor religious and despite some misconceptions, is not a substitute for Christmas. It is simply a time of reaffirming African-American people, their ancestors and culture." (Photo By John Anderson)

• Having resigned his job in protest of an amendment stealthily tacked onto a wind-power-related bill during last year's legislative session, David Hurlbut, who served for six years as a senior economist at the Texas Public Utility Commission, is speaking out about his abrupt departure. Hurlbut recently explained that he left because of a measure, known as subsection M, which will undermine the state's renewable energy portfolio standard program – or the set amount of statewide power generated from solar, biomass, geothermal, or wind sources (most often the latter) mandated by the Legislature. M would subtract the amount of renewable energy voluntarily purchased by customers from the overall state requirement, lessening the burden on large, industrial consumers of power; diminishing the renewable portfolio standard's efficacy; and making it incompatible with EPA partner programs. Hurlbut said the legislation was added primarily at the behest of lobby group Texas Industrial Electric Customers. In his resignation letter, Hurlbut wrote that subsection M "will in all likelihood require the commission to dismantle the most successful renewable energy program in the country. Even though the law may require it, this is a task I could not in good conscience carry out, and for this reason I am resigning my position." Though the PUC has asked legislators for clarification on the measure, Hurlbut says it cannot be favorably interpreted by PUC staff if left intact, and must be eliminated. – D.M.

• On Friday, Dec. 22, "The U.S. Court of Appeals for the D.C. Circuit denied FEMA's request to stay the part of a federal district court's order requiring the agency to provide clearer notices of the reasons for, and an opportunity to appeal, denials of eligibility for further housing assistance" for hurricane evacuees, according to a statement from Public Citizen. The group had previously requested from the U.S. District Court for the District of Columbia a preliminary injunction to keep the Federal Emergency Management Agency from ending rent assistance for evacuees "without first adequately explaining its decisions," according to Public Citizen, which, on Nov. 29, was granted the request, which it had made with Texas RioGrande Legal Aid and the Association of Community Organizations for Reform Now. "Under the Court of Appeals' ruling, if the notified evacuees can show that they have been wrongfully denied housing assistance, FEMA will be obligated to immediately provide them with assistance," said Public Citizen attorney Michael Kirkpatrick in the statement. The appeals court also ruled, however, that "FEMA now has no legal obligation to provide immediate housing assistance to the hurricane evacuees who were covered by the district court's order," according to the statement. FEMA said in a Dec. 22 release that it has "reached out to every household affected by the District Court's order to more clearly identify their reason(s) for [housing assistance] ineligibility, outline the required remedies, and allow them an additional 60 days to file an appeal with FEMA if they believe our ineligibility determination is in error." For more, see www.citizen.org pressroom and www.fema.gov/news/newsrelease.fema?id=32467. – Cheryl Smith