Beside the Point: Top 10 council highlights

Tweet
print
write a letter
1) No Retreat, No Surrender: Nothing got talk-radio wags' maws a squawkin' more than council's November retreat to "conference center in day-spa drag" the Crossings to indulge in a little team-building and agenda setting. And, judging from subsequent reports, to play with stickers.

3) Farewell to Raul Alvarez, Danny Thomas: As these two vacated their Place 2 and Place 6 seats, Austin bid Godspeed to two stalwart public servants, although we suspect we haven't heard the last of these Eastside movers.

5) Brewster McCracken, Jennifer Kim Crash City Browsers: The twin lightning rods spent $3,000 spiffing up their personal Web sites, only to be told doing so constituted a conflict-of-interest cyber-solecism. More the Legal Department's snafu than theirs.

6) What If They Created a Downtown Austin Plan and Nobody Came?: In drafting DAP proposals, planners saw the writing on the wall: With every other major development under its belt, ROMA Design Group was such a shoo-in, one competitor didn't even bother with their presentation. 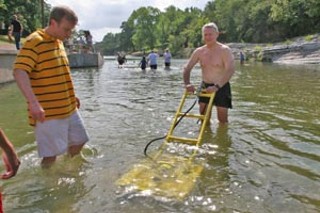 8) Council Lobs Budget Softballs: Of all the strange and arcane stuff crammed in the municipal budget, our favorite was $186,000 to reduce rising softball-league fees, proposed by Mike Martinez. Maybe the Chron-sters can afford to re-up!

9) Twenty-Four on Sixth: Economics Research Associates filmed a day on Sixth Street and presented it to council. The highlight featured a giggling clubgoer tripping over a passed-out drunk and then shooting him with her camera phone.

10) Soggy Statesman Piddles on Puppy Patios: In February, the AA-S editorial page sputtered that council members "had better things to do, like ... demand that dogs be allowed in certain restaurants" – rather than take dictation, we guess, from the city manager's office.