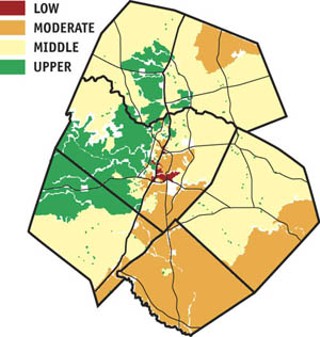 Household Income Distribution: The CTSIP report provides numerous maps and charts illustrating particular aspects of demographic, economic, and social indicators. This map shows the geographic distribution of household income, which largely echoes the racial and ethnic demographic regional map. The report notes, "The region has a clear East-West geographic pattern of income distribution that spans the entire region and which is mirrored by patterns in many other indicators of equity and economy."
View a larger image

New year prognosticators could do worse than begin with the 2006 report of the Central Texas Sustainability Indicators Project. The CTSIP is a multisponsor effort, begun in 2000, to develop the information necessary to support a regional effort at "sustainable development," a term the authors define as "providing for current needs without jeopardizing the ability of future generations to provide for their needs." (Call it a hifalutin translation of an old camper's chestnut: "Leave the campground in better shape than you found it.") The project draws on various regional information sources for verifiable statistical ("hard") information, as well as broad phone surveys ("soft") of area residents, to bring two kinds of knowledge together: 1) what is actually happening, demographically and otherwise, in our five-county area (Travis, Williamson, Hays, Bastrop, Caldwell) and 2) what we think is happening – which may not always be the same thing.

As they have in past years, the researchers discovered broad patterns in the data that allow both general and specific conclusions. They summarize five of the broadest as "key themes":

• Central Texans generally share broad core values: that we live in a good place, we need to protect our environment, and we all have obligations to each other.

• Even so, racial differences strongly influence both our perceptions of place and how well local resources are distributed among us.

• The geographic/socioeconomic divide is roughly diagonal: "As you move south and east ... you will find more poverty, fewer jobs, more struggling schools than to the north and west."

• "We continue to use and manage our key natural resources [air, water, land] as if they were limitless and indestructible."

• Our prosperous and growing region also exhibits expanding socioeconomic gaps between the rich, the poor, and the middle class.

"When we began the project," says CTSIP Executive Director Jim Walker, "there were plenty of things people took for granted, or thought they knew, about what was happening in the area. One of the reasons we decided the project was necessary was simply to look for data, for information that would confirm or contradict what everybody 'knew.'" Walker also said that the phone surveys have provided a useful counterpoint to the information gathered empirically from various local agencies or other sources. "We can see how closely changes in the actual circumstances are tracking with public attitudes," he continued, "both about the way things are and what we may need to do about them."

Walker said the changes in individual indicators give a progressive image of the last few years – including some fairly obvious things, like continued population growth, and some less so, like where that population is settling. But he adds that, from his perspective, the most dramatic changes have come in regional attitudes toward the very notion of sustainable development and its necessary counterpart, cross-regional cooperation. "When we began talking about this in the late Nineties," Walker recalls, "the whole idea of sustainable development was fairly new – we're one of the oldest projects like this nationwide – and it took time to get people to begin connecting the dots between our information and the issue of sustainability. Likewise, many people, especially in Austin, thought that it would be simply impossible to get area governments to begin to work together instead of in opposition to each other.

"Now, after efforts like Envision Central Texas and neighborhood planning in the communities and broad-based agencies like United Way all working on these problems, regionalism is an accepted notion. It's simply a way of understanding that we're all in this together and a shift away from the notion that every community and every local government is on its own." As if to emphasize the change, the project's sponsors include several local governments (Austin, Williamson County, Bastrop, Lockhart, and San Marcos among them) in addition to research sources like local universities and social service agencies.

As you might expect, the report itself is a mix of the good, the bad, and the ugly of Central Texas. An observer's perspective on the 40 or so categories may well depend literally on where he or she lives. The "diagonal" regional divide, while not as profoundly based on segregation as it once was, still reflects racial as well as economic divisions. Here are few random but revealing indicators:

• The whole region is moving toward a "majority-minority" population: Non-Hispanic whites currently comprise just over 55% of the regional population, and the trend is multiracial, multicultural.

• One in six (17%) of all Central Texans has no health insurance; for those earning below-poverty incomes, that figure is nearly 40%.

• Access to prenatal care is "highly dependent" on race, and the trend since 1998 is in the wrong direction; "more than 35% of African-American mothers and 25% of Hispanic mothers receive no prenatal care prior to giving birth."

• Major crime rates have slowly but steadily declined overall since the mid-Nineties, holding steady over the last few years, and (despite media saturation crime coverage), the public perception generally accords with the actual situation.

• African-American citizens (especially young people) have much higher rates of arrest than other racial groups and, consequently, much less confidence in the fairness of regional law enforcement and the criminal justice system.

• On environmental matters (one of the noisiest public categories), acquisition of public open space is actually increasing: "The acres of publicly owned public land per 1,000 residents has increased from 50 acres in 1998 to 68 acres in 2005" – though the researchers note that the open space is not distributed equally across the region.

• Simultaneously, our transportation choices are narrowing: "Since 1994, the percentage of Central Texans driving their own car to work has increased from 84% to 90%, while the number of persons taking the bus has dropped from 8% to 4%."

Those excerpts only touch the surface, and the report has now become biennial, partly because single-year trends tend to be small. More importantly, the project's participants now want to emphasize more strongly the necessity of public "engagement" in sustainability. "We consider the report to be a planning document," says Walker, "and we want to find ways to help local communities apply its information and integrate it into what they're already doing for sustainable development. As the report says, engagement is the fourth 'E' of sustainability [the others are equity, economy, and environment], and without community engagement, little progress can be made on the other aspects."

"We're not trying to tell people what to do," concludes Walker. "We're trying to give them information and tools with which to help assess the quality of their lives and that of the community at large. People tend to think about these things and argue about them as if 'planning' were at one extreme and 'the free market' were at the other, in absolute opposition. In fact, in our daily lives and in our communities, we all live in the gray area in the middle."

If you're interested in making that ordinary, confused middle where you're living a little less gray, a good start would be a leisurely New Year review of the CTSIP report – one chapter in a family-community photo album.

The CTSIP report provides numerous maps and charts illustrating particular aspects of demographic, economic, and social indicators. This map shows the geographic distribution of household income, which largely echoes the racial and ethnic demographic regional map. The report notes, "The region has a clear East-West geographic pattern of income distribution that spans the entire region and which is mirrored by patterns in many other indicators of equity and economy."

Green or Greenwash?
Formula One tests the city's standards for sustainable projects