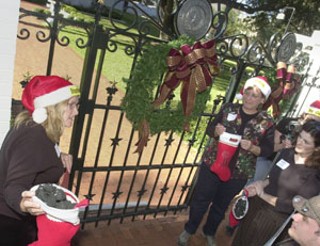 Karen Hadden and other activists with the Sustainable Energy and Economic Development Coalition attempt to deliver a Christmas stocking full of coal to the Governor's Mansion in protest of Gov. Rick Perry's support for 16 new coal-fired power plants in Texas. (Photo By John Anderson)

Battle lines were firmly drawn last Thursday in Austin at the State Office of Administrative Hearings, where final requests for party status in upcoming contested case hearings for TXU's 11 plants were taken up. A slew of opposition groups were given party status, as was a pro-plant group led by the mayors of five cities close to planned plants. (It was revealed that TXU had actually helped fund the group, known as Texans for Affordable and Reliable Power, and its founder, Fairfield Mayor Roy Hill, admitted to having family real estate dealings with the utility). The two-judge SOAH panel rejected calls from environmental groups to lift Perry's fast-track order, based on due process issues and discrepancies over TXU's nearly exclusive use of imported Wyoming Powder River Basin coal. They also moved to consolidate contested case hearings for six TXU permits, further streamlining an air pollution discourse that opponents complain is already being rushed – though they admit that the ruling allows them to concentrate their efforts.

Joining TARP is the Texas Association of Business, which has publicly backed all of the proposed coal plants and announced this week the launch of Texas Business for Clean, Affordable and Reliable Energy, "a coalition of businesses and individuals working to ensure that Texans have reliable power that meets or exceeds environmental standards." Astute readers may recall that TAB was indicted last year for funneling more than $1 million in corporate cash into Tom DeLay's 2002 redistricting boondoggle.

Squaring off against the coal cowboys is an unlikely gang known as Texas Cities for Clean Air Coalition, which was granted party status in all hearings. TCCAC has allied environmental groups with rural locals, ranchers, business chiefs, and a deep-pocketed, galvanized coalition of large and small local governments. Led by Dallas Mayor Laura Miller, the group boasts 32 participating governments, each kicking in a $10,000 membership fee. Miller hopes to address the Texas Commission on Environmental Quality's "painfully flawed permitting process," which fails to consider the plants' cumulative impact, and undermines the costly State Implementation Plan for air cleanup (think vehicle emissions testing). While some greener groups outrightly oppose coal, Miller says the TCACC "wants the proposed plants to burn as cleanly as possible," – i.e., the Integrated Gasification Combined Cycle or bona fide clean-coal plants, proven to be up to 90% cleaner and able to capture CO2.

In addition, the coal plants are seeing increasing push-back from business interests. Dallas oilman Albert Huddleston's decision to partner with a Waco-area community group to file suit against TXU over its Oak Grove plant this month – arguing that the coal-burner doesn't use the cleanest technology available and promising to file similar suits for all of TXU's plants – was an atypical union of right and left interests. Also this month, Texas Business for Clean Air was formed by real estate icon Trammell Crow, Container Store Chairman Garrett Boone, and Consumer Club head David Litman. They've set up a PAC to lobby legislators to require the cleanest possible technology and to slow the TCEQ permitting process – and unlike many other opponents, they have very deep pockets. Echoing Miller, the group says increased pollution could harm economic development. "We are not against TXU," said Litman. "We are all for companies making money. But you've passed off some of your costs on the public in terms of dirty air, in terms of kids showing up at Children's Hospital." The group, 20 business leaders strong, also includes Central Market VP Stephen Butt, Mary Kay Inc.'s VP Dick Bartlett, and Dreamworks Animation Chairman Roger Enrico.

Moreover, TXU's own shareholders have filed three separate resolutions redressing its proposed coal plans. Five New York City pension funds have asked the utility to formally speak to the plants' carbon and mercury emissions amid growing public and regulatory pressure. Connecticut Treasurer Denise Nappier asked TXU to examine energy efficiency and conservation as alternatives to its massive coal build-out. And the Benedictine Sisters of Boerne, Texas, called for more attention to carbon dioxide and mercury reductions, as well as more focus on IGCC.

Additionally, Rainforest Action Network – which campaigns for sustainable, socially responsible banking – sent letters to 54 financial institutions this month, urging them to withhold financing from TXU because dirty coal plants aren't good business. Union of Concerned Scientists energy analyst Jeff Deyette said in November that many large utilities are choosing clean coal in anticipation of federal carbon legislation and are rewriting their business plans to profit from capturing carbon dioxide at plants. Texas is currently the nation's No. 1 carbon dioxide emitter. TXU spokeswoman Kimberly Morgan said the utility has made "no formal changes" to its plans and is "pursuing air permits as filed." She touted TXU's oft-repeated claim that its new pulverized-coal burners, set to replace some older units, will result in a 20% fleetwide reduction in emissions. Critics question that refrain and note that said cleanups would be federally mandated regardless, since TXU runs some of the nation's most polluting plants. Responding to Miller's qualms over the plants' cumulative contribution to Big D's dirty air, Morgan said, "It's not fair for incoming industry to be penalized for a problem that already exists," blaming pollution primarily on cars and trucks. As for IGCC clean-coal plants, more than 20 of which are proposed nationwide, Morgan said, "It's not commercially viable for the large-scale build-out that Texas requires," adding that TXU is still working to get performance guarantees for the lignite and PRB coal it plans to use.

Rich Furman completed his MIT master's thesis on IGCC coal plants 35 years ago. Having commercialized new power plants for numerous utilities throughout his career, he's now come out of retirement to dispel doubts cast on IGCCs by utilities like TXU. "All of this technology is at hand and has been demonstrated at a very large scale," Furman said, counting 24 IGCC permits nationwide. He cited a study by coal technology firm Rentech that demonstrated four IGCC technologies that work with the PRB coal TXU will use, saying more PRB coal has been gasified than any other type. He pointed to the Eastman Chemical Company's proposed IGCC plant in Longview, which is based on the success of an IGCC plant the company has operated in Tennessee since 1984. Because IGCCs are typically built in 300-megawatt modules – often coupled together for large 1,000 megawatt or more build-outs – they're more reliable than large old-style plants, Furman said. He also noted how the carbon dioxide that the plants are able to capture could be pumped into Texas' plentiful decommissioned or declining oil wells, to extract additional reserves. He cited a plant in North Dakota that captures carbon dioxide, piping and selling it to Canadian oil drillers.

Looking ahead, everyone participating in the coal debate is preparing for a busy new year. Of TXU's pending permits, up for approval before those of other utilities, all but one is scheduled for a SOAH contested case hearing, where individuals and groups with party status can testify, introduce expert witnesses, and present evidence – with judges saying yea or nay to permits, before handing off to the TCEQ commissioners for final approval. TXU's Oak Grove plant, whose initial draft permit was denied by SOAH judges, will go before the TCEQ Jan. 10. It is unclear whether Perry will have named a replacement commissioner by then. Environmental Defense's Colin Rowan doubts that anyone appointed by Perry, "who has so enthusiastically promote[d] the plants … will be the immediate voice of reason at the TCEQ."

Rowan said ED will pursue a lawsuit filed in November against the TCEQ, claiming the commission ignores the Clean Air Act by failing to require the best available technology (namely IGCC), failing to weigh cumulative impacts on areas in air-pollution violation, and failing to follow Texas legal procedures. Rowan called for "a sober and thoughtful look at Texas' true energy needs and all the alternatives at our disposal," including conservation, renewable energy, natural gas, and clean coal. On the Christmas list of Tom "Smitty" Smith, director of nonprofit Public Citizen's Austin office, was a Legislature-enacted coal moratorium, slowing down permitting to look at cleaner alternatives. Echoing concerns of legislators nationwide who are coming to grips with climate change – and perhaps alluding to Texas action – State Rep. Mark Strama told the Chronicle in November that "before we rush into these [coal] permits, we've got to look at our responsibility as global citizens [and] reduce global warming pollution."