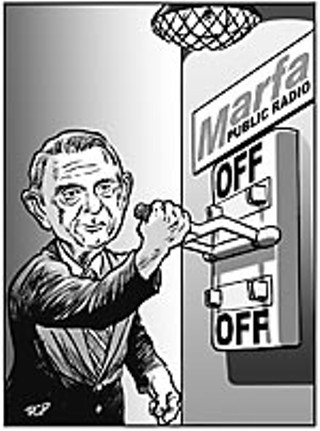 With much hoopla, Marfa Public Radio launched last February, backed by a group of prominent Austinites, including Texas Monthly Editor Evan Smith and KUT general manager Stewart Vanderwilt. Newsman Dan Rather was on hand to ceremoniously flip the switch; the next day Willie Nelson played a benefit concert. For a crowning touch, The New York Times covered the events, focusing on the introduction of public radio to the remote region of West Texas.

But just a few weeks after Marfa Public Radio started transmitting All Things Considered and other programs at low power, the signal was abruptly shut down when it was discovered that the station still didn't have federal approval to broadcast. Ten months later, Marfa Public Radio remains off the air, available only through its Web site, as the Federal Communications Commission continues to review its application, including the premature broadcasts.

Although the project began as a philanthropic effort to bring public radio to an underserved community, local radio veteran Robert Walker, president of Austin-based Matinee Radio LLC, now describes the Marfa experience as something of a nightmare. Matinee is spending hundreds of thousands of dollars to establish the station and plans to donate the signal to the nonprofit public radio entity. "It's a purely altruistic endeavor," said Walker, a board member of KLRU-TV and the Austin Film Society. But the result, he says, has been two years of acrimony and FCC delays, capped by the continued focus in Marfa on the aborted launch.

Matinee Radio won an auction for the Marfa signal in 2004, beating out several Marfa-based groups. Matinee Radio – which is technically not related to Matinee Media Corp., Walker's media management and investment firm, although they share several common shareholders – agreed to pay $187,000 for the license. With little hope of making a commercial operation profitable in the sparsely populated area, Matinee decided to dedicate the signal to a public radio format and established Marfa Public Radio, a nonprofit group, to run the station. A board of directors was formed including Smith and Vanderwilt. (Smith recently left the Marfa board in order to join Matinee Media's board.) Vanderwilt used KUT's clout to arrange for discounted NPR programming, according to published reports. (Vanderwilt did not return a call seeking comment.)

From the start, there were problems. In increasingly hip Marfa – where conflicts between longtime residents and the wealthy outsiders flocking to the area are common – some locals welcomed the station while others decried Matinee as carpetbaggers and questioned the group's motives for buying the signal. Soon after winning the auction, Walker says, he began receiving anonymous threats, including an envelope full of human excrement with the greeting, "Congratulations on Marfa."

According to Walker, station management knew they didn't have a construction permit, the formal authorization to begin broadcasting, when Rather participated in the launch ceremony – the electrical switch was simply an empty junction box with a light bulb on top, meant to symbolize the commencement of station operations. Rather told the audience at the Willie Nelson concert that the station wasn't going on the air that day. (Disclosure: The Austin Chronicle was a co-sponsor of the Willie Nelson benefit concert.) But a few days later, says Walker, after a series of e-mails from FCC representatives seemed to indicate that the station had cleared the last hurdles in the licensing process – including approval from Mexico, a notoriously difficult procedure – Marfa staffers began mistakenly broadcasting a low-power signal.

Walker blames the premature broadcasts on a "miscommunication" and "a case of overenthusiasm" by station management in Marfa, who were under the impression that they had met all the FCC requirements, he said. "It was unintentional and not done in a malicious way."

Ten months later, Matinee still doesn't have the construction permit for its 100,000-watt transmitter. "We don't know why" it's taken so long after it appeared to be a done deal, Walker says. He believes the high-profile Dan Rather-Willie Nelson event may have played a role, although it's also possible the investigation of the broadcast violation slowed the process. "It's probably part politics, part government inertia," he said. (An FCC spokeswoman refused to comment or provide any information on the station's application, saying only the case is still an "open proceeding.")

The FCC and Matinee are locked in another bureaucratic dispute over whether or not Matinee is eligible for a special discount on the purchase of the Marfa signal. Matinee claimed a 35% "new entrant bidding credit," which was available to bidders with no other ownership interests in stations. As of the filing deadline, Matinee didn't own any other stations. But according to FCC filings, four days after the deadline, "a corporation comprised of Matinee interest holders" bought a station in Karnes City, Texas. The FCC has taken the position that Matinee should have amended its application and it is only eligible for a 25% discount, but Matinee continues to dispute that.

Also in limbo while the FCC continues its review process is a $476,000 grant for the station from the Department of Commerce's Public Telecommunications Facilities Program, which was tied to the issuance of the construction permit. "I don't know if we're going to get it or not," Walker said.

Marfa Public Radio's Web site says only that the station is off the air "while steel is being purchased and shipped for our new tower," making no mention of the FCC issues. In an April interview with a reporter from an NPR newsletter, station manager Tom Michael cited a litany of woes building the tower but said "engineers will be working to bring the site to its full 100,000-watt power over the next couple of months." (Michael declined to comment for this story, referring all questions to Walker.)

Walker says the station is "ready to go," pending FCC approval. He expects the premature broadcasting violation to be handled as a consent decree, an administrative procedure for concluding the issue. But he adds that the whole experience, particularly the rancor in Marfa and the FCC delays, have soured him on the idea of developing more nonprofit enterprises. "We still believe [Marfa] is a good cause; it's our little stepchild," Walker said. "But it's been a real challenge."