Tweet
print
write a letter
Earlier this month, Gregory D. Kutz, managing director of forensic audits and special investigations for the Government Accountability Office, testified before the Senate Committee on Homeland Security and Governmental Affairs that from June to November 2006, "FEMA continued to lose tens of millions of dollars through potentially improper and/or fraudulent payments from both hurricanes Katrina and Rita," including "$17 million in rental assistance paid to individuals to whom FEMA had already provided free housing through trailers or apartments." Among the cases highlighted in the report is one in Austin. In September 2005, FEMA began paying the $705-a-month apartment rent of an evacuee indirectly through the city of Austin, while simultaneously making "rental assistance payments in September 2005, February 2006, and May 2006 totaling more than $3,600."

"I'm not surprised by it, but no, I don't know that specific case," said Paul Hilgers, director of the city's Neighborhood Housing and Community Development Office, which funneled the federal rent aid to local landlords, when asked about the testimony. "There would be no way for us to know who had received direct payment assistance from FEMA."

FEMA spokesman James McIntyre complained that auditors are only looking at numbers and, as a result, their reports and testimony don't convey the overall disaster response picture, particularly the human side of the catastrophe. "The cities did not take into consideration whether these people would be eligible [for assistance]," McIntyre said. "They took them out of the kindness of their hearts."

On the federal end, FEMA initially sent money to evacuees in advance of getting their paperwork processed, he said. "They had nothing. They had [to get] food, water, diapers for the babies." He acknowledged that duplicate payments were very possible at this point, adding, "That's because the process was catching up."

Hilgers noted that FEMA initially sent rental assistance payments directly to evacuees without explaining that the aid was meant to be spent on rent, so many evacuees spent their checks on things like furniture and clothes. FEMA later sent out letters informing evacuees that the money should be spent on rent. But the correspondence didn't come at the same time as the money, McIntyre explained, because the direct payments were deposited electronically into evacuees' bank accounts. The government didn't initially have addresses for many evacuees, who started out in emergency shelters all over the country, he said. Most evacuees who received duplicate rental assistance are cooperative when they are contacted and informed that they can pay the government back in installments, he said, but "unfortunately, in auditing, payment plans don't count. It's [only] actual money back into the system" that gets counted.

As Hilgers put it, "It's not the character of the Katrina evacuees that's being called into question with this testimony. It's really the ineffectiveness of the bureaucracy." See the entire testimony at www.gao.gov/cgi-bin/getrpt?GAO-07-252T. 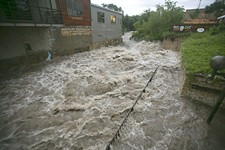