Will they burn brighter or burn out?

Austin's electrified yuletide tradition – a shimmering strip of Christmas-light-laden bungalows on 37th Street, just east of Guadalupe – for more than 20 years has treated processions of thousands to a visual OD of elaborate outdoor illumination that would leave even Clark Griswold feeling inadequate. But many residents and onlookers agree that this year things aren't quite what they used to be.

It's a story less about lights than about community. The short explanation for the street's absence of dazzle is that the most devoted – perhaps fanatical – Christmas-light enthusiasts have all gradually moved away. Some say this year's departure of light display co-founders Jamie Lipman and Sharon Smith – owners of the light-loaded plastic- and foil-wrapped cornerstone residence that offered an eye-popping backyard walkthrough – was the tipping point. Several neighbors partially blame the lackluster year on three dark, long-vacant houses on the street, owned by well-known Central Austin real estate lord Jules Caplan, which have inexplicably come on and off the market at allegedly exorbitant prices. Passerby Jorie Grosse, who's lived in Austin off and on for 15 years, described this year's showing as "kind of lame" and "uninspired" Thursday night, specifically noting how she missed the insane luminescence of the Lipman-Smith residence (the new owners have a drastically toned-down display – reportedly leftovers that remained hanging). She compared the success of the street's Christmas lights to a shopping mall, in that "you need to have the anchors." (What the display lacks in shimmer, it has recently made up for in shock – with the weekend debut of a nativity scene featuring Mary Cheney – the vice president's pregnant lesbian daughter – and her partner, Heather Poe, as Christ's parents, along with Dick Cheney and Rummy as wise men and an angelic floating Condi Rice overhead.)

Randy Thompson, a 37th Street resident since 1980, said, "Most years I wouldn't say the [Zilker Park] Trail of Lights is better than ours, but this year it is." Thompson said he opted against putting up lights due to spousal pressure and reported overhearing upset and belligerent onlookers bemoan his lack of lights as well as his next-door neighbor's lackluster illumination effort.

"It's unfair that we're somehow responsible for entertaining the city of Austin," said a 37th Street resident of four years who asked not to be named for fear of darkening relations with neighbors. We'll refer to that source as Rudolph. "The story ended last year. You can observe what happened now that the people who started the tradition aren't here any more," Rudolph said. "It's not the new people's fault that they didn't buy into the lights, they simply saw a house that met their needs." Many of the new homeowners are professionals who come home late and rarely socialize with neighbors, he added.

While the new folks can't be held responsible for upholding the tradition, "We're trying to get the community kicked back in," Rudolph said. The famously intertwined displays had always been dependent on kinship, camaraderie, and bonding on the street – an effort for neighbors, by neighbors. "All the characters involved didn't necessarily like each other," he explained, "but we got along and could stand in the street together and have some beers."

Last year at this time, the six or so homes set to change hands on the small street made observers in the North University Neighborhood Association worry that a disproportionate concentration of college-aged partyers living on the street, and their laissez-faire landlords, was inciting owner-occupant flight, a symptom NUNA veteran Mary Gay Maxwell described as a precursor to community deterioration. This year, the raucous partying appears to have calmed. "It seems a lot more subdued. There was a lot of discomfort with how out of hand it got," Maxwell said.

Regardless of the extent to which the several new single-family owner occupants participate in the lighting lunacy, Maxwell sees the ownership shift as a positive for the neighborhood after last year's commonly held fears that the homes would go to investors eager to pack them full of rowdy frat-types – a common grievance in university-area neighborhoods. Maxwell, who served on the city's McMansion ordinance task force, said occupancy limits are needed to address the backdoor frat issue (where a single-family-zoned house – sometimes a newly built McMansion – functions as mini apartment complex, often renting to students). She isn't hopeful such rules will materialize soon, however.

So the fresh crop of homeowner occupants is comforting to NUNA stalwarts who feared deterioration into a "student ghetto," as Maxwell puts it. (It's worth noting that longtime residents agree that 37th has always been a mix of owners and renters.) Thursday night, a handful of thirtysomethings joined new 37th Street homeowner Ethan Cohen on his porch. With pingpong-table-sized recreations of vintage Astrodome scoreboard animations in the front yard, it was more than apropos when the term "rebuilding year" was thrown out as an explanation for this year's Christmas light lull. Though Cohen, a native Houstonian, had never seen the display in person before moving in, tales of the seasonlong crowds didn't dissuade him from purchasing. Cohen said he's actually met a few neighbors for the first time thanks to the lights.

Like Cohen, Marjorie Cartwright had never actually seen the Christmastime displays prior to closing on her 37th Street home in October, despite being an Austinite since 1988. She said the area's convenient walkability outweighed what she had heard about the street's holiday hysterics. For the most part, she has also been willing to overlook some occasional late-night revelry next door, she says, "not that I don't remember those days."

Thursday night, Cartwright lit up a respectable yet conservative array of white lights. "The creative and off-the-wall ideas require group consensus about aim and participation, otherwise it's just lights," she said, perhaps showing signs of emerging as heir apparent to her street's light legacy. 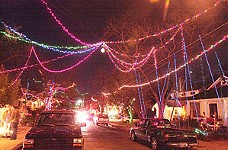