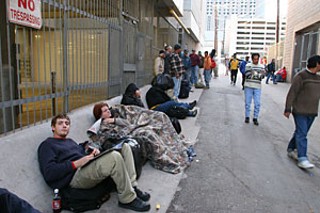 The 175-bed Austin Resource Center for the Homeless holds a nightly bed lottery. Managers say the center is able to accommodate everyone on most nights, but the recent cold weather has resulted in extra-long lines, and there are plans to increase the capacity to 200 the next time the temperature dips to freezing. These people are waiting in the alley behind the center for the lottery to begin. (photo by Jana Birchum)

When nighttime temperatures dipped into the 20s a couple of weeks back, a handful of local churches opened up their doors to the homeless. As usual, the Austin Resource Center for the Homeless' 175 beds were all taken; next door, the Salvation Army's 100 slots reserved for homeless males were filled as well. Anywhere between 50 and 70 people typically spill into the church shelters when they open on nights the temperature falls to 32 degrees, said Carol Swicker, program director with Front Steps, formerly the Capital Area Homeless Alliance.

According to an analysis of the local homeless situation released last month by the Community Action Network, a public-private partnership between local organizations, government offices, businesses, and individuals with a focus on health and well-being issues in Austin and Travis County, the shelter-seeking crowd made up only a fraction of Austin's homeless population. Among the highlights of "Facts and Questions About Homelessness," an update of CAN's 2001 "Homelessness Assessment Report" and its 2002 Homelessness FAQ (see www.caction.org/reports.htm), are these disconcerting statistics, paraprashed directly from the analysis:

• Over a 12-month period, there were more than 6,200 homeless people in the Austin area.

• More than 1,500 children are affected by homelessness in AISD. In this school year, AISD Project Help served 1,556 homeless students. (See p.80 for more on Project Help.)

• The high cost of living contributes to homelessness. Austin has the highest housing costs for an urban area in Texas (Texas A&M Real Estate Center Report 2005).

• Low wages contribute to homelessness. Of the top 10 occupational categories in the Austin area, nearly 30% of jobs have a median wage under $10 an hour (WorkSource).

"The primary reasons that people become and remain homeless are poverty and lack of resources" – specifically, a lack of affordable housing – said Rick Rivera, chair of Austin's Homeless Task Force, one of CAN's several planning arms. Unfortunately, Austin has plenty of the former and a scarcity of the latter. According to U.S. census figures, 15.7% of Travis Co. residents live below the federal poverty line – $19,350 for a family of four. Considering that federal poverty line numbers tend to be conservative estimates, the 15.7% figure only hints at the extent of poverty here. (For more, see "Beyond the Poverty Line," Jan. 20, 2006.)

Unless you've been living on another planet, you're already aware that affordable housing is hard to come by in the Austin area, where, according to the Department of Housing and Urban Development, fair market rent for a two-bedroom apartment is $836. According to Lisa Garcia, vice president of assisted housing for the Housing Authority of the City of Austin, about 5,900 families are on the local waiting list for Section 8 vouchers and 4,680 are on the list for public housing.

Despite the gloomy stats, however, Austin was one of a select number of local governments across the country recognized in a report released Oct. 31 by the National Alliance to End Homelessness for its efforts to work with its homeless population. (For more, see "A New Vision: What Is in Community Plans to End Homelessness?," www.naeh.org/content/article/detail/1397.) However, without a combination of good affordable-housing programs and significant homelessness-prevention plans in place, well-intended community efforts to make a dent in the local homeless population won't make a lasting difference, said Nan P. Roman, president of the National Alliance to End Homelessness. "You can't cherry-pick a few pieces and think that they are going to work," said Roman. Simply focusing on rapid rehousing without prevention programs won't work, for example, because "as soon as you empty out the shelter … the beds are just going to fill up again," she said.

Austin's Ending Chronic Homelessness Task Force, also affiliated with CAN, has focused on rehousing through collaborations with housing nonprofits like Caritas of Austin and Foundation Communities, noted Rivera, but overall homelessness-prevention efforts – such as making child care more affordable, raising the minimum wage, and offering accessible substance-abuse programs, for example – haven't been as strong, he said, because the funding simply isn't there. Considering, Rivera added, that 15% to 20% of the Austin-area homeless population is classified as chronically homeless – continuously without a home for at least a year or temporarily homeless at least four times over a three-year period, according to a HUD definition cited in CAN's FAQ – and that the chronically homeless consume about 50% of all services used locally by homeless people, putting money into prevention efforts at all levels – local, state, and federal – makes sound economic sense. "It's a matter of time and resources." And if governments don't invest more in these types of programs, "we're going to continue to have our community experience this," he said.