Tweet
print
write a letter
The Austin Police Department has seized another 352 eight-liners allegedly being used in illegal gambling operations around town. On Nov. 30, cops with APD's Organized Crime Division, Centralized Investigations, Strategic Command, and Special Operations descended on eight gaming rooms with warrants to seize the machines and cash – in total, the fuzz copped nearly $81K and handed out tickets (Class C misdemeanor citations, punishable by up to a $500 fine) for illegal gaming to 47 people. Additional charges are pending, APD notes.

This is the third major eight-liner seizure operation since last year – in 2005, cops nabbed 733 machines as part of Operation Casino Flush, and earlier this year they seized nearly 1,100 machines as part of Operation Flatliner. (Apparently, the Nov. 30 bust went off without a hitch even though it seemingly lacked a coy name – like, say, Operation Two Cherries and a Dollar Sign. Perhaps police were more focused on figuring out where to store the cumbersome machines than worrying about a catchy name – lest the machines sit out in the elements, barely covered by a string of tarps, behind the APD training academy for months, which is what happened last time. [See "Psst! Wanna buy some (slightly ruined) eight-liners?," July 28.])

In all, police appear hopeful that the message behind the ongoing raids is becoming clear: "Illegal gambling will not be tolerated in the Austin community," APD reports in a press release, noting that game rooms often attract "suspicious individuals" and "criminal activity" – some of it violent, like robbery. Indeed, in 2005, APD officers fielded at least 26 game-room robberies (likely more went unreported, they say), since the onslaught of coordinated police raids. They've only gotten 14 robbery reports connected to game rooms this year, however. 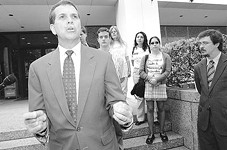