Judging by the omens, Capital Metro's Houston-based, union-busting lawyer, Jeff Londa, will soon need to spend more time at home. Thanks to the heroic efforts of Houston janitors organized by the Service Employees International Union, culminating in a four-week strike that ended Nov. 21, corporate lawyers specializing in what they like to call "union avoidance" are anticipating a wave of new business. One told the Houston Chronicle forebodingly a few days before the janitors' victory, "They get the foot in the door, get a decent contract, and [SEIU can] use that as a marketing tool to show workers in other cities how successful they were." There aren't too many professions for which "a decent contract" for employees provides an occasion for dire warnings to future clients. If there's any justice, Houston contractors and corporations will soon have persistent need of the services of just such bottom-feeders, as the SEIU organizing drive spreads beyond the 5,300 janitors in major Houston office buildings to many thousands more service employees throughout the city and – who knows? – elsewhere in Texas and the South.

For the record, the new contract won by the Houston janitors is decent only by the dismal standards of their prestrike employment. The mostly Latina workers earned an average of $5.25 an hour, or 10 cents more than the federal minimum (often after many years); they had no health insurance, paid vacation days, or other benefits; and since they were largely limited to four-hour shifts, a standard paycheck was $20 a day, or $100 a week. Those who could worked two or three jobs to try to make ends meet. Under the new contract, wages will rise to a still-miserly $7.75 over three years, and workers will eventually be able to buy health insurance for themselves and their families. They will have a grievance procedure and, in a cruel irony of the new, part-time economy, the right to work longer hours.

Just as importantly, the workers have won a representative voice in their working conditions and a hard-won sense of dignity. As janitor Mercedes Herrera told the Los Angeles Times, before the union she was "an invisible person." Now, she says, "I'm so happy; I'm so excited. We got justice. This will change my life for my family. ... We worked hard, and janitors won big."

The janitors indeed won big, but only after a risky monthlong strike and a series of public protests and civil-disobedience actions (my personal favorite being an afternoon human blockade in the middle of upscale Galleria traffic) involving both local strikers, solidarity "freedom flyers" from other SEIU locals, and volunteers. Because office janitorial work is generally subcontracted, the janitors are employed not directly by building owners but by national subcontractors. By the same token, those subcontractors also have SEIU janitorial contracts (paying much higher wages) in New York, Chicago, Los Angeles, and elsewhere, and the union thereby has the capacity to spread the pressure nationwide. There were some complaints in Houston business circles about SEIU "outsiders" messing with the local (presumably docile) work force. How is it that capital is presumed to be free to move at light speed, anywhere across the nation and world, but labor is supposed to stay put, keep quiet, and accept whatever the local padrones condescend to pay?

Over the Thanksgiving weekend, I spoke at length with Tom Balanoff (a longtime friend), head of the Illinois-based SEIU Local 1, which took the lead in the Houston organizing effort. SEIU, anchored in the service economy, is now the largest U.S. union and one of the few with a growing membership and economic strength. Balanoff is passionate about the need for the U.S. labor movement to give much more than lip service to national organizing, in the South and elsewhere, and he sees the Houston effort as a potential watershed moment in the fight. "For too long, union leaders have been content to manage their power," he told me, "instead of trying to build that power. It's safer and easier that way. But meanwhile, we've watched our membership decline and our strength decline."

By definition, organizing is risky. Balanoff and the SEIU first won recognition for the Houston janitors in 2005 by making it clear to the national contractors that their ongoing employee relationships depended on that recognition. Nevertheless the contractors – and the building owners and their investors, who pay the bills – didn't believe that the Houston workers, weak in resources and subject to heavy turnover, could effectively be organized. The SEIU provided money, strategy, their best organizing teams, and political and activist solidarity. The Houston workers responded with their own determination to risk their precarious livelihoods for the prospect of a better future. "This is the most exciting effort I've ever been involved in," said Balanoff. "We can't let it end here – we have to build upon it and carry it on."

UT law professor and labor historian Jack Getman told the L.A. Times, "It's obviously a major victory. Low-wage workers will hear the message that in solidarity lies strength. ... It's not going to immediately usher in the unionization of the South, but I think it's a significant step." What is most striking about the Houston victory is that it was won not simply by work stoppages but by reaching out beyond the work force and the workplace, to make the janitors' predicament a broadly public issue. At Chevron headquarters and a Greater Houston Partnership luncheon, the strikers bluntly compared the billions in current oil profits to the pittance paid to the janitors; others visited J.P. Morgan offices to ask how to plan for a family's future on $20 a day.

When the strike ended, Mayor Bill White criticized some of the strikers' tactics, but said, "I don't think people understood how low the wages were and that some people were only working four hours a day." He called the settlement "a milestone in the history of the city of Houston and, more importantly, something uplifting the lives of Houston residents who are just trying to get by every single day." A few days later, the Houston Chronicle, not exactly legendary as a friend of the workingman, editorialized, "Living in Houston can, and should, be a guarantee that hard work will be rewarded with dignified treatment and a living wage. Janitors, their employers and labor organizers all deserve thanks for making Houston a more fair, more functional community."

That's a sentiment bearing wide repetition, in a state better known for enforcing dirty work at low wages than for fairly rewarding honest labor. A few days ago in Austin, Cap Metro proudly announced it will provide wireless computer networks on its bus routes for suburban commuters; meanwhile the agency continues outsourcing routes to nonunion contractors and finding quasi-legal ways to block union workers from its planned commuter rail lines. There could hardly be a better illustration of subsidizing privilege at the expense of those who make those privileges possible.

Let us hope that the SEIU victory in Houston sparks a wildfire in Texas and the South, and perhaps even a nascent reversal of a decadeslong, successful effort by highly centralized, organized capital to undermine the value of labor. It would be something to read a Cox newspaper – for example, the Austin American-Statesman – applauding "a guarantee that hard work will be rewarded with dignified treatment and a living wage." Even better would be to hear many, many more voices like that of 63-year-old Austraberta Rodriguez, a janitor for 27 years, who told the Associated Press as she walked a Houston picket line: "The union has opened our eyes and our minds. We want more hours, better pay, but we also want more respect and more dignity." 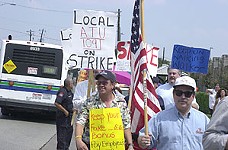