Seemingly undaunted by his failure to push through legislation in 2005 that sought to protect pharmacists of conscience from having to fill scrips for emergency contraceptives, Rep. Frank Corte, R-San Antonio, gears up his 2007 this-is-where-life-begins agenda

Seemingly undaunted by his failure to push through legislation in 2005 that sought to protect "pharmacists of conscience" (that is, pro-life pill counters) from having to fill scrips for emergency contraceptives – or by the larger defeat inherent in the U.S. Food and Drug Administration's decision to approve over-the-counter sales status for the EC Plan B – Rep. Frank "the Fetus" Corte, R-San Antonio, is gearing up his 2007 this-is-where-life-begins agenda with several pieces of prefiled legislation, including a bill that again attempts to complicate access to emergency contraceptives.

After more than three years of wrangling and delays, the FDA on Aug. 24 approved a bid to make Plan B (the so-called "morning-after pill") available for OTC sales to women 18 and older. Plan B contains a higher than normal dose of the hormones contained in regular birth control pills and is used to prevent unwanted pregnancy when taken within 72 hours of unprotected sex. But Corte's House Bill 23 seeks to codify an incomplete definition of EC, requires pharmacists to counsel Plan B buyers based on the incomplete information and to post an obscenely large sign near cash registers that contains info about conception, and, finally, requires pharmacies to collect personal information on customers to be kept on file for at least two years.

Specifically, Corte's front-running legislative stinker would define emergency contraceptives as drugs that "prevent pregnancy by preventing fertilization of an egg or preventing implantation of an egg in a uterus," conveniently leaving out the third way EC can work, by preventing ovulation altogether. It also requires pharmacists to "inform" Plan B customers – "orally and in writing" – that the drug "may prevent" fertilization or implantation, and requires all businesses that sell Plan B to post signs "in clear view of each cash register" that are "at least" 11/2 feet tall and 2 feet wide, reading (in "block letters"): "If you believe that life begins at fertilization – the point where the sperm and egg unite – then you need to know that emergency contraception may either function as a contraceptive to prevent the egg and sperm from uniting or prevent the implantation of your already fertilized egg in your womb." And finally, in addition to requiring that customers present valid photo identification – Plan B is only approved for OTC sales to adults 18 and older – HB 23 requires customers to sign for the drug and requires pharmacists to keep records of customer names and dates of sale for at least two years – a provision destined to raise privacy issues.

To hear Corte staffer and spokeswoman Kathi Seay tell it, however, Corte's bill in no way seeks to constrict access to Plan B. Rather, she says, it's merely a way to ensure "informed consent," a way to make sure that women know exactly what they're getting into – it would protect pharmacists from "women, some day, down the line" coming back to complain they weren't aware the pill might "prevent fertilization" or egg implantation. And, she says, there is no intention to mislead by omitting the fact that Plan B could prevent ovulation – that, she says, is implied in the fact that the pill can prevent fertilization. (Specific language regarding ovulation could be added to the text, she said.)

As innocent as Seay's explanation may sound, Sarah Wheat, former executive director of NARAL Pro-Choice Texas and now public affairs director for Austin Planned Parenthood, ain't buying it: "I think [Corte's] goal is to try to confuse folks about what emergency contraceptives are and aren't." The decision to include medically inaccurate information – specifically, she says, by omitting the fact that Plan B may function to prevent ovulation altogether, distinct from preventing fertilization – belies Corte's real agenda, Wheat suggests, which is (as it has appeared to be in nearly every legislative session) to find a backdoor way to legally define fertilization as the point at which life begins. "This is an ideological definition of what EC is that is not backed by science or by the FDA," Wheat says.

Although the House State Affairs Committee, where Corte's various pro-life bills typically land, is no bastion of liberal (or even moderate) thinking, it is entirely unclear what lawmakers would do with HB 23. To date, Corte's contraceptive-related offerings haven't wooed the committee members – and HB 23 is unlikely to break the ice, in large part because in approving Plan B for OTC sales, the FDA incorporated into its ruling all of the guidelines for sale, including pertinent drug-fact information. In other words, the feds have got it covered and aren't likely in need of Corte's after-the-fact revisions – including his assertion that egg-meets-sperm equals life. In short, "If the FDA doesn't require [these provisions], I don't understand why Frank Corte is requiring them," Wheat says. "He is trying to make the pharmacy and pharmacist an agent for promoting his pro-life agenda."

Seay disagrees. She says that while the FDA has included relevant drug facts – ones that she says are similar to those contained in HB 23 – the information, inserted into drug packaging, is often lengthy – and, as such, people simply don't read it. "People don't read [package inserts]," she said, "and they can be particularly long." In other words, HB 23 is designed as something of a CliffsNotes for the drug-fact-information-challenged set. Indeed, Seay suggests, there's nothing about the signage proposed under HB 23, for example, that is different from other required postings, like restricting gun-toting in stores or selling tobacco to minors – some products just "warrant" efforts to provide "extra information," she says. "If you know, up front, that [Plan B] is preventing the implantation of an egg, and you're fine with it, [then] go for it." 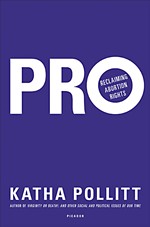 PRO: Reclaiming Abortion Rights and The Birth of the Pill
Jonathan Eig's breezy history of the Pill is engaging, but Katha Pollitt's argument for abortion rights is indispensible