It's the Carbon, Stupid! 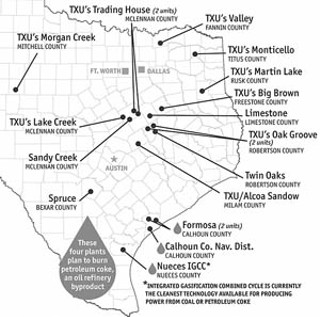 Of 19 proposed coal plants seeking permit approval, only one would use the newer, cleaner integrated gasification combined cycle technology. Energy giant TXU wants to build 11 of the 19 plants.
View a larger image

Though plans by various Texas utilities to build 19 new coal-fired power plants have drawn widespread criticism for increases in smog, ozone, fine particle, and mercury pollution they'll pump into the air, most acrimonious is the plants' contribution to climate change – the impending catastrophe caused by fossil-fuel combustion gasses (namely carbon dioxide) building up atmospherically and keeping heat from radiating into space. Texas is the nation's foremost CO2 emitter (If we were a country, we'd rank seventh globally, according to an Environmental Defense study), and the new plants would double our output. The good news is that there are viable alternatives to meet the state's growing energy needs. The bad news is that our state honchos, awash in utility cash, lack the leadership to pursue them.

Worse still, as hearings on the coal plants' environmental permits begin this week, many people are shocked to learn that the state environmental agency has outright refused to consider CO2 emissions in permitting decisions. Texas Commission on Environmental Quality spokeswoman Andrea Morrow said, "CO2 is not a regulated pollutant," explaining that if the federal government determines otherwise, "we'll look at it at that point." Meanwhile, other states and countries – including the 165 Kyoto agreement member nations, 5,000 delegates at a recent United Nations Climate Change Conference, 30 U.S. states that have addressed climate change, and 14 with specific coal-based greenhouse gas reduction initiatives – are acting on stark warnings from scientists that some 60-80% of global CO2 emissions must be cut in order to avert climate change's near-term predicted effects: devastating flooding, intensifying catastrophic storms, drought, crop die-offs, insect plagues, and species extinction. Observers fear utilities are rushing to have their plants permitted – with the help of Gov. Rick Perry's permit fast-tracking executive order last October – before an anticipated federal carbon-capping legislation is passed, saddling utility customers with a higher cost of coal-generated power.

The justification for the Texas "coal rush" is an estimate by the Electric Reliability Council of Texas (which oversees 85% of Texas' deregulated energy markets) that electricity supplies will dip below the 12.5% mandated reserve margin by 2008 due to growing populations. The ERCOT estimate was cited both by Perry in a September Dallas Morning News op-ed, and repeatedly by the massive PR blitz of Dallas utility giant TXU, which is proposing 11 of the 19 plants. According to campaign finance watchdogs Texans for Public Justice, Perry received $242,150 from TXU between January of 2003 and November of 2006 – including money from TXU's PACs, former TXU executive Earle Nye, and employees who gave money directly.

Carol Biedrzycki, director of the nonprofit Texas Ratepayers' Organization to Save Energy, points out that TXU has a representative on all of ERCOT's boards. "The generating companies go to ERCOT and get them to say that Texas badly needs new capacity," Biedrzycki said. "Then they go to TCEQ and say, 'We'd love to help you reduce emissions, but we can't because ERCOT is telling us we need to keep these dirty old plants running and build some new ones because ERCOT is worried about having enough electricity to meet demand.'" She faulted Perry's fast-tracking orders for putting TCEQ staffers, employed to expertly evaluate the coal permits, in the position of disagreeing with the governor if they find a discrepancy. She also wondered why Perry's executive orders didn't include energy efficiency measures, and she ultimately blamed today's woes on the legislature's 1999 decision to deregulate much of the state's electricity market, which simultaneously eliminated long-term state energy planning and the Public Utility Commission of Texas' practice of certifying power plants (prior to permitting) based on whether they were the best technology, if their added capacity could be met with efficiency measures, and their public health and environmental costs. Today, "there's no one at the state whose job it is to lay out a long-term strategic energy plan, said Colin Rowan, communication director for the Austin office of Environmental Defense. "Gov. Perry and the state's primary source of information is TXU."

A study released last week by ED turns the coal-rush argument on its head, while illuminating a clean, economical path to maintaining energy reserves through 2010. "Assuming the most aggressive building schedule, none of these [coal] plants would be built until 2009 at the earliest," the study reads. "The proposed coal plants will give Texas more power than we need, two years after we need it, and more pollution than we can afford."

Meeting energy needs with efficiency tactics costs less than half as much as the coal plants, according to the study. ED calls for a fivefold increase to the state energy efficiency standards, which now require utilities to offset 10% of their new electricity demand with efficiency programs (such as incentives to replace old ACs and appliances and to better insulate homes). ED also calls for a doubling of so-called interruptible load programs that give utilities the ability to cycle off customers' air conditioners for 10-minute spans during peak demand (some 50,000 Austin Energy business and residential customers already participate). In this scenario, Texas would have to add only 700 megawatts (about one power plant worth) of new generating capacity a year in 2010 and 2011 to maintain reserve margins, according to the study. And if that capacity isn't achieved through a combination of solar, wind, biomass, or geothermal renewable energy (all with vast statewide potential), it could come from ultraefficient combined heating and power natural gas plants (like the one at Austin's new Dell Children's Hospital) or through coal gasification or integrated gasification combined cycle aka clean coal plants, which are up to 90% cleaner and are capable of capturing CO2.

TXU has indicated that it plans to proceed with its plant applications as proposed. But in a recent statement responding to mounting criticism, the company said it's addressing the issue by making new coal plants more efficient, investing up to $2 billion in IGCC or related research, and though "there is currently no economical technology to capture and sequester CO2, TXU is investing today to make its [proposed] plants carbon capture-ready." None of TXU's proposed plants use IGCC technology, though one other utility's proposed plant will.

Perry's op-ed speciously repeated TXU's promise to offset new plant emissions while reducing its plants' statewide pollution by 20% – reductions critics point out would be mandated by federal law regardless. He also characterized those advocating something other than building new coal plants as an "extreme element of the environmental community that opposes additional energy capacity no matter what," adding that "they want to return us to the era of horse and buggy – except they would probably complain about the methane gas from horse manure, too."

"It's bad, it's getting worse fast, we're running out of time, and it's primarily caused by burning fossil fuels," said U.S. Department of Energy scientist Chuck Kutschner of global warming at a recent conference. He insisted that the U.S. must lead other nations by example and "factor carbon reduction into every energy decision," and coined the phrase, "it's the carbon, stupid," an adaptation of the Clinton-campaign saying, "it's the economy, stupid." If only Perry and other leaders could get that through their heads.

For more on this, as well as dates and times for hearings on the public permitting process, see: www.treia.org, www.stoptxu.com, www.stopthecoalplant.org, www.txu.com, and www.tceq.org. For a list of Austin Energy's rebates, see www.austinenergy.com.