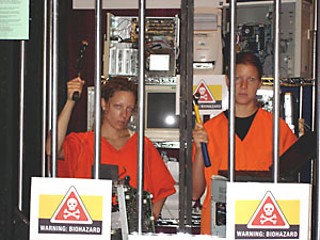 To the tune of Johnny Cash's "Folsom Prison Blues," Texas Campaign for the Environment organizers depict the plight of some 1,000 prisoners in the U.S. who toil in electronic waste recycling operations said to be highly contaminated by carcinogenic dust, according to a new report. – D.M. (Photo By Daniel Mottola)

Picture a stream of refuse, comprised of countless obsolete computers and electronic devices. That stream is what we frequently refer to these days as e-waste.

When e-waste is landfilled or incinerated, a host of toxic chemicals, including carcinogenic heavy metals, can be released into the ground, air, and water. A lucrative recycling industry has developed around harvesting valuable and reusable components from outdated electronics, but the problem of e-waste being processed by unprotected workers in unsafe conditions continues as so-called e-recyclers profit by selling components to developing countries (including China, India, Pakistan, and Nigeria, among others) with lax or absent environmental laws, rather than responsibly handling it here. But would you believe similarly unsafe e-recycling is happening throughout the U.S., using captive laborers, all within the purview of the federal government?

Last month, as 500 members of the nation's electronics recycling industry gathered in Austin for the annual e-scrap conference, a coalition of public interest and environmental groups – including Austin-based Texas Campaign for the Environment – released the report "Toxic Sweatshops, How UNICOR Prison Recycling Harms Workers, Communities, the Environment, and the Recycling Industry." Delivering the most incisive look yet at UNICOR, aka Federal Prison Industries – a $765 million-per-year company operated under the U.S. Department of Justice that has employed prisoners in various labor tasks since 1934 – the report details how inmates are paid $0.23-$1.15 per hour to smash computer monitor glass, allegedly with inadequate tools and safety equipment, to access salvageable copper coils, releasing clouds of toxin-laced dust over workers and guards in the process. UNICOR claims that its workers have access to a range of safety equipment and that air quality is periodically tested.

The report contains the accounts of corrections Officer Leroy Smith, a former safety manager in UNICOR's operation in Atwater, Calif., who became a federal whistle-blower in 2004, documenting the dangerous extent of the recycling operations and decrying efforts to cover them up.

"Daily, I receive calls from my colleagues working in computer recycling operations at other correctional institutions who describe coming home coated in dust. They had been told that there was no danger. Now, many have health problems, and others are scared about what lies in store for them," said Smith, who spoke at the E-Scrap conference. The one air-quality test performed at his facility in 2003, he said, showed three times the permissible levels of heavy metals, including lead, cadmium, barium, and beryllium, adding that prisoners were often lacerated by broken glass, that food was served in contaminated work areas, and that conditions were intentionally cleaned up immediately before safety inspections. He faulted the Justice Department, the Bureau of Prisons (who investigated and largely dismissed the allegations), and even the U.S. Office of Special Council, who gave him the 2006 Public Servant of the Year award for his whistle-blowing. And he claimed no one has adequately addressed the long-term medical effects of the toxic exposure or taken steps to demand reforms from UNICOR, which operates six prison operations similar to his – including one in Texarkana – four of which have never been investigated.

At the forefront of the e-waste reform movement is the Computer TakeBack Campaign, whose work since 2002 led Austin's Dell computers to abandon its use of UNICOR and to transform into an e-recycling leader. In addition to targeting safety and environmental hazards at UNICOR, TakeBack is opposed to the undercutting effect its ultralow wages have on the private e-waste industry. "Economically, it sucks for someone in this business trying to do the right thing, said Ted Smith, who founded Silicon Valley Toxics Coalition in 1982, the predecessor to the Computer TakeBack Campaign. In 2003 TakeBack joined with the Basel Action Network, a global e-waste reform group, to create the Recyclers Pledge of True Stewardship, whose signatories promise to track their toxic e-waste to avoid its destination in prisons, landfills, and especially in developing nations where it's often processed in dangerous and environmentally devastating ways, as shockingly depicted in BAN's 2002 film Exporting Harm. Now, the two groups are working to transform the pledge into a third-party-audited certification for e-recyclers, which Smith says companies can use to advertise that they're doing the right thing and "drive the sham recyclers out of business."

None of the roughly 10 e-waste handlers operating in Austin have taken the pledge, despite its prominence in industry publications since 2003, according to Texas Campaign for the Environment director Robin Schneider. "But all you need to call yourself an e-recycler is a truck," she added. And she noted that Goodwill Industries, who accepts discarded electronics at its Austin locations, ships e-waste to Dallas-based recycler Intechra Inc., who has signed the pledge. TCE is joining Computer TakeBack to urge U.S. Attorney General Alberto Gonzales to rein in UNICOR. They're also calling on the Texas Legislature to pass e-waste measures in the upcoming session and are about to open a dialogue with the city of Austin in hopes they'll join markedly less progressive neighbors Kyle and Georgetown in passing a resolution in favor of state and federal producer take-back e-waste laws. For more info, see www.texasenvironment.org or www.computertakeback.com. 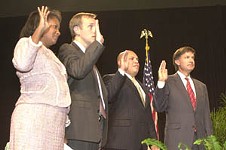