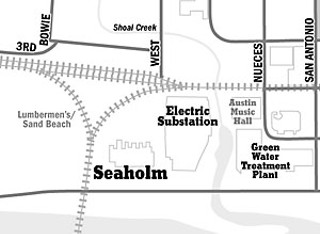 Right of way along the "Y" of rail on the Seaholm site could be crucial if the city wants to extend the Capital Metro rail line route into South Austin or even build a true intermodal rail site where passengers could transfer between the two proposed rail lines. The city's consultant recommendation, however, says future rail expansion is not precluded by giving up this right of way, since the rail could be pursued through dedicated track or subway tunnels.

To understand this debate – which has consumed time at both the Downtown Commission and the Design Commission in recent weeks – you have to understand a number of issues: the perceived goals of using Seaholm as an intermodal transit site; the existing rail tracks, used and unused, that feed into Seaholm; and what the city and Capital Metro have decided should happen to those tracks since the city awarded the Seaholm public-private development contract to Seaholm Power LLC.

From the dawn of mankind – or at least as far back as ROMA Design's Seaholm master plan in 2001 – Seaholm has been touted as a prime site for intermodal transportation Downtown, one where commuter rail, street cars, and bus transit would happily mingle in one giant downtown destination. This was not just a nifty feel-good fantasy of transit junkies. Seaholm is actually where the city's two proposed commuter rail lines – the Austin-San Antonio Intermunicipal Commuter Rail District's Georgetown-San Antonio and Capital Metro's All Systems Go Leander-to-Downtown – practically touch.

"Practically" is the operative word. So far, Capital Metro has avoided pushing the Leander-to-Downtown line any farther than the Convention Center. Crossing Downtown – and especially crossing Congress Avenue – would be complicated, messy and, most importantly, could require expensive tunneling under Congress Avenue. Capital Metro's solution is to offer streetcars that will run, with cars, in transit lanes between the Convention Center and other sites. The preferred route for those streetcars – to Mueller, UT, and Downtown, including Seaholm – will be unveiled at Capital Metro's board meeting next Monday.

That's the Capital Metro piece. The city piece of this puzzle is more complicated and requires taking a closer look at the Seaholm tract. Imagine the tracks coming into Seaholm creating the letter "Y." The western fork is ASA's Georgetown-San Antonio line. The eastern fork is Cap Metro's Leander-to-Downtown line. Then imagine a crosshatched line just north over the top of the "Y." That's the unused Third Street railroad line. Under Seaholm Power LLC's conceived plans for the site, that north-end crosshatched line and the eastern Seaholm curve would be subsumed by the full-scale redevelopment that is envisioned for the project.

For the rail junkies of the world – who'd like to see rail function like it does in completed systems with northwest to southeast connectors – that's a big "no no." By removing that curve and line – literally putting development on top of them – the long-term interconnection between the two rail lines would be destroyed. It also would limit how, and under what circumstances, rail could run into South Austin and out to Oak Hill. For rail advocates like Andrew Clements, that option needs to be preserved at all costs, even if it might mean running rail through or under the new Seaholm development. "I don't think this is a political option – the transfer of development rights on this piece of land – when there is a much more valuable public use of this land," he said at the Downtown Commission meeting last week. "There is a need for this piece of land to serve the entire region, and we need to strongly advocate for that."

City staff – and rail consultant Carter & Burgess – see the preservation of the eastern curve as less critical. At last week's meeting, planner Greg Kiloh noted the city had studied five options, combining platforms at locations east of Lamar, north of Seaholm, and along the curves. Most were deemed infeasible. In the end, the staff recommendation was to settle for a platform at Third and Lamar, away from either curve, with a Capital Metro bus and trolley as the best alternative. Council Member Brewster McCracken, who's seen the strong resistance to commuter rail along South Congress into South Austin, also was unfazed. Until there's a consensus that South Austin wants rail, McCracken's not enthused about pursuing it.