A Letter to Mexico 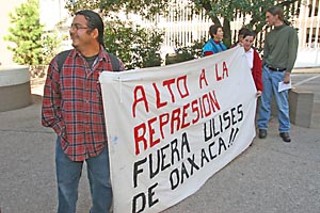 A small group of Austinites went to the Mexican Consulate Friday, Oct. 20, to show support for protesters in Mexico's southern city of Oaxaca, who are demanding the resignation of Gov. Ulises Ruiz. They say Ruiz's 2004 election was fraudulent and that his government has consistently retaliated against dissenters. The banner Oaxacan organizer Omar Angel (l) and Marissa Villarreal Avila (r) are holding reads "stop the repression" and "out with Oaxaca's Ulises." (Photo By Jana Birchum)

Jose Ramirez got an unexpected lesson on the intersection of civil disobedience and civil unrest Friday as he waited in line at the Mexican Consulate to apply for a travel permit to drive his truck south of the border for a weekend trip. As he waited to talk to the bureaucrat on the other side of the glass doors in front of him, he was the closest observer to Caroline Keating, who was holding a stack of letters with about 300 signatures addressed to Mexican President Vicente Fox and José Luis Soberanes, president of Mexico's Human Rights Commission.

The original letter was authored by Omar Angel, a Oaxacan organizer living in Austin who is a member of La Otra, an international organization of activists that endorses the Zapatista Army of National Liberation's la Otra Campaña (the Other Campaign), "a national forum that proposes non-electoral solutions to Mexico's ongoing social crises and domination by national and foreign capital," according to a press release from local La Otra members. In it, Angel expresses concern about human-rights violations in Oaxaca, where a combination of striking teachers, indigenous groups, students, and leftists is demanding the resignation of Gov. Ulises Ruiz. They say Ruiz's 2004 election was fraudulent and that his government has consistently retaliated against dissenters. The current unrest began five months ago when the teachers began their strike. At least five people have been killed so far, and several others have been tortured and harassed, according to La Otra. As more people have gotten involved in the effort to get Ruiz out of office, tension in the city has escalated to the point that people in Mexico, as well as concerned observers abroad like Keating, a grad student in UT's joint degree program in Latin American studies and journalism, worry about the Mexican army stepping in. According to the Associated Press, "Ruiz has repeatedly called on the federal government to send in the army to restore order but President Vicente Fox's administration has so far refused, saying it prefers to negotiate with the protesters. On Friday [Oct. 20], Interior Secretary Carlos Abascal repeated an earlier offer to have local police under federal command patrol the city."

"They really want to put down these movements, which have gained a lot of popular support," said Keating, referring to the situation in Oaxaca, as well as to protests this past year in San Salvador Atenco, about an hour east of Mexico City, where there have been violent clashes between police and, among others, local peasant farmers opposed to development plans that involve the land they work. Atenco is also mentioned in the letter copies presented at the consulate.

In addition to requesting "The immediate discharge of Ulises Ruiz," Angel's letter, which Keating showed to Ramirez as he stood in line, requests "immediate freedom for the political prisoners of Oaxaca" and subsequently lists dozens of names. This point stuck out for Ramirez, a native of the central state of Michoacan who immigrated to Austin with his family 17 years ago. That's why he signed his name to a copy of the document. "I think the Mexican laws [are] not lenient, and they tend to abuse the power of the Mexican authorities," he later said. Although he occasionally watches Spanish-language news, he said his encounter at the consulate was the first time he had heard about the situation in Oaxaca.

Not long after Ramirez put his signature to paper, a consulate employee opened the glass door and called him inside. Keating and Angel slid inside the office behind Ramirez but were promptly asked to leave and to wait outside for Angeles Gomez, who handles public relations for the consulate and for whom they had already been told to wait. This time Gomez quickly appeared. Angel asked if someone from the office of Jorge Guajardo, Mexico's consul general in Austin, would come out and talk to him. Gomez said she was representing the consulate, so Angel spoke briefly with her about the letter, emphasizing its No. 1 request: "A peaceful solution to the conflict." "We hope that these letters reach the Mexican government," he told Gomez, to which she responded, "of course," and asked for Angel's contact info. She said if the consulate received a response from the Mexican government, she would let Angel know.

The situation in Oaxaca is no doubt fresh on the minds of the letters' intended recipients. Mexico's federal Senate voted on Oct. 19 "that there were no grounds to remove Ruiz from office," according to the AP. And about 1,000 protesters marched to the Senate in Mexico City Saturday in response to that decision, saying it could lead to more violence, the AP reports. Also, international rebel of mystery Subcomandante Marcos, leader of the Zapatista Army of National Liberation, formally called upon La Otra members last weekend to continue supporting the striking teachers, as well as the rest of the protest groups, who are collectively known as the Popular Assembly of the Oaxacan Peoples, or APPO in Spanish. The AP also reports that "A group of 50 teachers went to the United Nations office in Mexico City on Tuesday to demand the international body intervene and ask Ruiz to step down." As of press time, the consulate's Guajardo could not be reached for comment.

After exiting the building onto Brazos Street, Keating and Angel joined the handful of other La Otra Campaña followers who came to join them in presenting the signatures and to protest. They held a banner reading "Stop the Repression" and "Out With Oaxaca's Ulises!!" A couple of minutes later, however – when someone from consulate security came outside and told the group it wasn't allowed to protest on consulate property and that its members were standing on the wrong side of the line in the concrete where the building's grounds end and the city's property begins – the consulate took its own turn at trying to squelch dissent. Although he went back inside after the banner holders shuffled across the concrete line, the consulate employee somehow knew when they inched back across the divider and onto the consulate's property again. He promptly came back out and called the cops, which abruptly ended the demonstration.