Follow the Nov. 7 Balloting on the 'Chronicle' Election Blog

By the time you read this, the Austin Chronicle Election Page will be up and running at austinchronicle.com/election. We'll be posting the latest news and musings on local, state, and national contests. And on election night, we'll have live coverage of election returns as they come in. Yes, you could hop all over the Net hunting down results yourself, but why? Let us do the work for you at our one-stop Web shop. – Lee Nichols

Hell Freezes Over (Or: Hutchison Admits Bush Got Iraq Wrong)

Need any further proof that the Iraq war is a failure? Just look at Oct. 19's televised debate between the Texas candidates for U.S. Senate, and note that Sen. Kay Bailey Hutchison has joined the GOP rats who've jumped ship. Okay, maybe that's overstating it a bit, but the fact that Hutchison distanced herself at all from President Bush's Iraq policy after almost six years as a staunch ally is telling.

Hutchison's bombshell came when the Houston Chronicle's Clay Robison asked her, "Although we know a little bit more about Iraq than we did three years ago when we got involved in this war, had you known then that there were apparently no weapons of mass destruction in Iraq and that there are apparently no ties to al Qaeda, would you have voted the same way on the Iraq war resolution?" 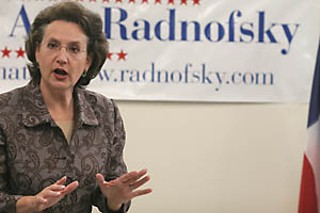 "Clay, if I had known then what I know now about the weapons of mass destruction, which was a key reason that I voted to go in there, I would not vote to go into Iraq the way we did," Hutchison said. Then she qualified her stunner: "But I have to say, I don't think the president would have asked for that vote either." (We might recommend our senior senator read Ron Suskind's biography of former Treasury Secretary Paul O'Neill, The Price of Loyalty, wherein O'Neill exposes how the Bushites were planning the invasion eight months before 9/11, or even the infamous Downing Street memo, wherein British senior ministers secretly expressed concern that "the intelligence and facts were being fixed around the policy" of the Bush administration. But we digress.)

Her qualification continued, "We had intelligence that we relied on. So did the British. They had the same intelligence. Everyone thought they had weapons of mass destruction. Saddam Hussein had kicked the weapons inspectors out in 1998, which led everyone to believe that there weapons of mass destruction." (Um, okay, back to our digression. And while you're there, ask some actual weapons inspectors if they agree, such as the former 1998 U.N. weapons inspector to which she refers, Scott Ritter, or his successor, Hans Blix. Okay, we'll stop now.) Hutchison made sure to finish with the perfunctory invocation of That Horrible Event That Had Nothing to Do With Iraq: Bush "was trying to make sure that America was not hit with another 9/11 with a weapon of mass destruction. And he believed, I think, that Iraq was a place that had the weapons and had the capacity to deliver them."

The admission was made even more surprising by the fact that it just handed red meat to her main opponent, Democrat Barbara Ann Radnofsky. "At the time of the Iraqi war resolution, Senator [Bob] Graham of Florida stood on the floor of the Senate and, in an unusual move, begged his colleagues to read the secret papers that we weren't privy to. We now know that those secret papers revealed that the weapons of mass destruction documentation from the CIA was quite skeptical. I don't believe that our senators read the secret documents. … I didn't have access to the secret papers, but I've read Senator Graham's book [Intelligence Matters] and read it thoroughly. I will tell you that any senator who didn't do as their colleagues begged was derelict in their abilities to lead. We need new leadership in this country. We've been disappointed by what they've done in Iraq. What a telling comment by my colleague."

Perry Looks Over His Shoulder

Gov. Rick Perry must put more stock in public opinion polls than he'd like us to believe. Stumping in East Texas on Tuesday, Perry blasted the "liberal vision" of Democrat Chris Bell, who moved within 10 points of the governor in a new SurveyUSA poll released early this week. Perry, at 36%, gained a point over last month's poll, but Bell picked up three, to 26%. An assortment of earlier polls had shown greater distance between Perry and his challengers. The new numbers show Carole Keeton Strayhorn at 19% (up four points from last month), while fellow indie Kinky Friedman bottomed out at 16%, a seven-point drop. With Bell moving up in the charts, Perry's "Proud of Texas" bus tour is going the extra mile on anti-Bell rhetoric. Perry's bus stops Tuesday took in Lufkin, Nacogdoches, Henderson, Marshall, Longview, and Tyler. – Amy Smith

Early Voting Off to a Solid Start

Early voting in Travis Co. began Monday, and the first two days posted impressive results for a nonpresidential election year – 10,771 voters showing up at the 21 early-voting locations and the rotating mobile voting sites. Add in 2,717 mail-in ballots received, and that translates to 2.43% of Travis' registered voters. Multiply those numbers over the 12 total early-voting days, and use the conventional wisdom that Election Day will likely produce twice the number as the early voting period, and we could be headed for a final turnout of 40-45%. – L.N.