Chris Bell knew the TV debate was his one shot, so he tried to hit it out of the park

Tweet
print
write a letter
Chris Bell knew the Oct. 6 gubernatorial debate would determine the course his campaign would take in the final stretch before Election Day. He didn't want to blow it, particularly when he had the possibility of a financial windfall – from a wealthy Houston attorney – riding on his performance. "We knew that was our one shot," Bell said. "So I really have to credit my staff for all the preparation that went into it. Even if no one watched the debate, it was still going to be talked about in the public opinion polls."

The prospective benefactor – trial lawyer John O'Quinn – became the inspiration for the cheesy "Sharks" attack ad Gov. Rick Perry launched against Bell after he accepted O'Quinn's $1 million check. Nevertheless, Bell credits O'Quinn for putting him through a rigorous rehearsal drill that carried considerable financial incentives. "He has a very intense preparation system that he goes through when he's getting ready for trials," Bell said of the attorney. "He uses a psychologist and a focus group to try to get inside your head and figure out what makes you tick so you can better project that to other people." The two spent about three weeks prepping for the debate. There were four different types of practice sessions with O'Quinn, including two with a focus-group leader.

On the Sunday before the debate, Bell spent the entire day practicing at the Texas AFL-CIO headquarters in Austin. He took questions on camera and then reviewed his responses before beginning the next round. The next day, there were two complete run-throughs of the debate – this time with a full cast of characters in proper attire. Austin Rep. Mark Strama played Rick Perry, Austin screenwriter Monte Williams donned a dress and played Carole Keeton Strayhorn, and Matt Hardigree, a contributor to the Burnt Orange Report political blog, played Kinky Friedman. Most of the news panel was made up of former journalists, including Jim Moore, who played Dallas Morning News political writer Wayne Slater. Moore and Slater co-authored the book Bush's Brain.

When it came time for the real deal, Bell was both prepared and surprised. "The lightning round went much different than we thought," he said. "We were expecting more issue-driven questions, along the lines of 'Do you favor parental consent?' We weren't expecting a pop quiz." But Bell managed to pass the pop quiz, with one of his responses – to the question about term limits for governor – being one of his best of the night.

On another, he paused for a moment to consider the year of the battle of the Alamo – 1836. In fact, Bell was thinking back to a recent controversy in his hometown of Houston, over the proposed name of a professional soccer team – "Houston 1836," which created quite a stir in the Hispanic community. "I knew I had heard the year recently because I remember reading stories about it," Bell said. "A lot of people thought I knew the year because I had a fifth grader who I had been drilling on Texas history." 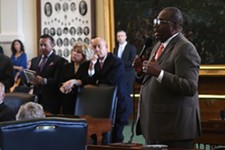 Election Ticker: The March Toward March 3
Campaign finance numbers set Senate and congressional candidates ahead, leave others in the dust What You Need to Know About U.S. Senate and House Races in Texas
Early voting in Texas starts Feb. 18, 2020. Here's the view from atop your Texas primary ballot. Election 2006
Chris Bell goes on a snipe hunt, and other campaign news