This just in: Brewster McCracken blows own horn!

It's easy to imagine this headline hunched under "Study: Woods Preferred Site for Bear Defecation" in a phantom edition of the Obvious American-Statesman, but indeed, that was the story late last week. Apparently, McCracken and council colleague Jennifer Kim together spent more than $5,000 spiffing up their respective Web sites. As the cash came from their office funds, the city ethics officer nudged the city attorney's office from its legendary slumber, eliciting agreement that as long as the councillors were using city bucks for the Webkeeping, the sites couldn't serve indirectly as political advocacy or advertising. It's been a couple of months since our municipal innocence was shattered – thanks, Webgate!

McCracken and Kim duly paid the city back and removed the offensive materials, which by contemporary campaign standards were computerized versions of the late Jake Pickle's pecks of pickle pins. But Intergate wasn't over for the Statesman's editors; reading their editorial online, the dustup was a charming diversion, alternately a "little flap" and a "kerfuffle," in the vein of their Sunday funnies or endorsements page. The electronic edict from On High was that Netgate negated the real offense, that "in a city with so much natural beauty and interesting features, Austin's Web site is downright ugly." The editorial apparently droned on most aesthetically – but that was all I could read before a flash-ad for Georgetown tract homes careened across the screen and crashed my computer.

Taking Pagegate to heart, the city quickly responded with a radical reimagining of its Web site: titles. Instead of slogging through all of "Algae causes odor, musty taste in water. Water conditions pose no health concern," I can just glance at the header: "Water safe, but smelly." Oh, and they made the text even smaller. Computers really do save us time!

Cruelly lost in the collateral damage of Gatepage are the real victims, the councilmembers. Telling McCracken he can't bloviate about how he created Austin's film industry by shooting El Mariachi on his own credit cards or Kim that she can't e-disagree with her colleagues online and off the dais is like telling Fred Astaire he can't dance. Except for the part about him being dead.

This week at council: another light agenda. Items from council include a master plan for Barton Springs pool and asking the Ethics Commission for guidelines on "enhancing the enforceability of anti-lobbying provisions." An ethicist's work, alas, is never done. 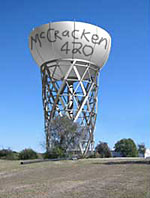 Beside The Point
Water Pressure