Former Mayor Bruce Todd (no, that's not him in the photo) has asked Brackenridge Hospital and St. David's HealthCare to compile statistics on how much the city pays to treat bicycling injuries due to failure to wear a helmet. (Photo By John Carrico)

The feud over whether the city of Austin should require adult bicyclists to wear cranial protection has been quiet for nearly two months, but that abruptly changed last week when proponents of a mandatory, all-ages helmet ordinance announced Tuesday that Brackenridge Hospital and St. David's HealthCare will soon undertake a Bicycle Data Collection Initiative studying head-injury severity correlated with helmet usage on patients involved in bicycle-related accidents. The study, supported by Will Wynn and Betty Dunkerley, would put real numbers behind proponents' arguments that a helmet law would save millions of dollars in uncompensated medical care costs. Former Mayor Bruce Todd, having recently recovered from a serious bicycling accident that left him hospitalized last year, brought the proposed ordinance to City Council this summer with the help of his PR practitioner wife, Elizabeth Christian. The couple's efforts are driven by the sincere belief that Todd's helmet saved his life. But his proposed ordinance met significant opposition in August at a City Hall hearing – where, lacking political momentum, it stalled – and that opposition reacted harshly to Tuesday's announcement.

The League of Bicycling Voters – a newly re-united and replenished opposition group that first battled against a similar law, enacted in 1996 during Todd's mayoral tenure (later amended to affect only kids 17 and under), was caught off guard by the announcement. "While it's hard to argue against more info, this is so inflammatory because it excluded everyone from the bicycle community," LOBV spokesman Rob D'Amico said.

D'Amico especially objected to how the study was framed – citing a statement by Dr. Steve Berkowitz, chief medical officer for St. David's HealthCare, in which Berkowitz said, "We believe that this collaborative partnership with Brackenridge will provide scientific and economic data that our city leaders need to arrive at an irrefutable decision to pass a citywide, all-ages bicycle helmet ordinance" – arguing that the study's outcome is a forgone conclusion and that it's justification for a law that utterly lacks community support. D'Amico also chastised Mayor Wynn for his ties to the study. The LOBV has argued that legislating helmet use distracts from efforts to actually make biking safer, including improving city infrastructure, signage, and road-user education. The group's central complaint about the study announcement, however, is that it appears to pre-empt a new broad-based city Bicycle Safety Task Force, currently under assemblage, rather than working in concert with it.

Christian, speaking on behalf of the study's participants as well as her husband, said, "Nothing about this is pre-emptive." She asked, "What on Earth NoHelmetLaw.org (referring to the LOBV's Web site) could contribute to a process designed for a peer-reviewed journal?" Christian said the study will collect data based on who comes into emergency rooms with head injuries from bicycle-related accidents, whether they were wearing a helmet, and what their insurance status is. "The Travis County Healthcare District will be able to extrapolate the cost," she added.

Christian called the LOBV's negative reaction to the study "mind-boggling" and suggested that its opposition lies in its fear of what the data will show. Beyond educating the public about the benefits of helmets, "You must legislate behavior," she said, pointing to Seattle's successful helmet law, passed in 2003. Asked why her group's helmet push didn't include the additional bike lanes and safe-passing law Seattle has, Christian said, "It's too complicated," and though she supports such "tactics," they require substantial time and money, while a helmet law "costs the city virtually nothing to save so many lives."

Annick Beaudet, a project manager with the city's Bicycle & Pedestrian Program, said a Bicycle Safety Task Force is something her department has long been considering, regardless of the helmet law. She said, "Staff supports the efforts of the hospitals to obtain data about bicycling accidents," adding, however, that "a helmet ordinance is just one option in looking at bike safety."

The task force, expected to hold its first meeting in January, will include 25 members representing bicycling stakeholder groups, medical associations, various city departments, engineers, and public health experts. Its recommendations will go to City Council in 2008 and will be included in the city's bike plan. Beaudet says she hopes the task force, a "holistic approach to bike safety," will result in bicycling becoming a more viable transit option. For more info, see www.nohelmetlaw.org and www.bikesafeaustin.org 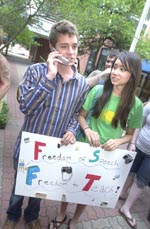