Details to be discussed at final noise-education forum this week

Tweet
print
write a letter
Neighborhoods in the MoPac Neighborhoods Associations Coalition have waited for sound walls along MoPac for so long, you'd figure those walls would be designed by architect Antoine Predock, hewn from native limestone and clad in a dazzling array of copper.

Instead, the walls promise to be rather ordinary but serviceable, a point that will be reviewed at a series of noise-education forums this week on the Texas Department of Transportation campus. The walls will be part of the bigger $100 million MoPac improvement project that will add one managed lane each way between Parmer and Cesar Chavez. Those lanes will fit right down existing right of way, while still leaving room for a parallel track for the Georgetown-San Antonio commuter rail line if negotiations fail with Union Pacific.

The MoPac expansion project was controversial long before anyone had heard the term "toll roads," bringing 900 people out to protest a possible elevated expressway back in 2001. This time, contractor DMJM Harris is trying a kinder, gentler progression of the project, using a first phase to simply add a managed lane in each direction, primarily for the use of Capital Metro buses. Will that make a real dent in traffic? Engineer John Kelly doesn't think so, but the neighbors do finally get their sound walls.

MoNAC will be watching the process carefully. Frances Allen, whose house backed up to MoPac when it was still simply a rail line, is one of those residents who intend to make sure TxDOT keeps its promise that the project will stay within the current footprint and eventually lead to some improvement in traffic. That doesn't mean Allen's not grateful for the sound walls, which will replace what she calls "those ratty, good-for-nothing fences" along many property lines.

MoNAC came close to getting its sound walls back when the Capital Area Metropolitan Planning Organization was still the Austin Transportation Plan, but confusion over whether the $2.5 million could be used for nonroad improvements pulled the funding from the table, Allen said. DMJM should have a sound-wall proposal – including a sound-wall garden on the TxDOT campus with three possible choices – by the end of the year. If all goes well, the walls would go in by the end of 2007.

In the meantime, DMJM will be trying to figure out the thornier issues of future MoPac improvements, like how to correct the bottleneck over the river, or get traffic to flow more easily into Downtown with a minimum of environmental impacts. 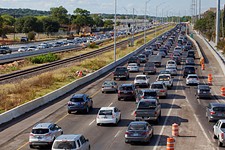 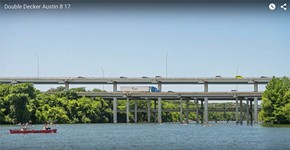 Public Notice: One Ring to Rule Them All
MoPac South one big link in a toll road loop