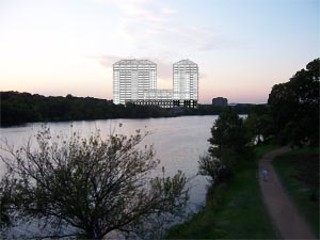 Too close to Town Lake? Neighborhoods, parks advocates, and the Town Lake Trail Foundation all oppose new development too close to Town Lake's shore, such as this proposed project at 300/222 E. Riverside, planned for three 200' residential towers. (Sketch is based on drawings submitted to the city by the developer, CWS Capital Partners.)

How committed should the city of Austin be to protecting the Town Lake waterfront as open space for all Austin citizens to enjoy?

That's the broad public-interest issue raised by a proposed high-rise residential project at 300 and 222 E. Riverside. The South River City Citizens neighborhood association has sounded the alarm, primarily on the grounds that the developer-requested variances, if granted, would set an unwise and dangerous precedent for deviating from the city ordinance that protects the Town Lake waterfront.

To make the project financially viable (or more bluntly, to maximize its profit) the developer – California-based CWS Capital Partners – wants to build far closer to Town Lake and its tributary, Blunn Creek, than city ordinance currently allows. CWS is asking the city for an 80-foot setback, rather than the required 200 feet. The request to be exempted from the Waterfront Overlay Ordinance goes first to the city's Parks and Recreation Board, then to the Planning Commission. (It also could go to City Council, if the developer appeals a denial – or if an approval triggers a public outcry.) With the Parks Board scheduled to start the process Tuesday, Oct. 24, the race is on.

The purpose of the Waterfront Overlay ordinance is to "promote the harmonious interaction and transition between urban development and the park land and shoreline of Town Lake and the Colorado River." It recognizes the value and economic potential of Austin's urban waterfront – an area many cities have redeveloped into successful retail, entertainment, and tourist districts. The ordinance is based on the Town Lake Corridor Study, a set of land-use standards adopted in 1985, partly in response to public outcry over the high-rise Hyatt Hotel on the south shore of Town Lake. Zoning regulations in the Waterfront Overlay Combining District vary within 15 different subdistricts.

But while safeguards are theoretically in place, SRCC representative Claudette Lowe finds it "real scary" that the city lacks a strong, integrated defense of Town Lake. In the current boom, the properties along Town Lake are under the greatest development pressure in history. Ensuring that the waterfront is properly developed requires a holistic vision, said Lowe; "It's not just a neighborhood-by-neighborhood issue." Yet in trying to fend off encroachments, said Lowe, "Each little neighborhood is doing it on their own." Lowe cited a parks board document listing 26 properties along the Town Lake corridor with signs of development activity.

The properties at 300 and 222 E. Riverside were purchased recently by CWS (indeed, one property has yet to close). Greg Miller, Austin VP for development with CWS, is heading up the planned redevelopment. He referred Chronicle inquiries to his attorney, Richard Suttle.

Along the stretch of Town Lake in question, the waterfront ordinance requires a total setback of 200 feet – a 150-foot "primary setback" in which no development is permitted, then a "secondary setback" of an additional 50 feet in which some site development is permitted, but not buildings. According to parks board vice chair Jeb Boyt, no other developer has ever requested a variance from the primary setback. "We can be much more flexible about the secondary setback," said Boyt. "But we need to apply a much higher standard in the primary setback."

After the full parks board is briefed Oct. 24, the issue goes to the land and facilities subcommittee for detailed study and recommendations and a Nov. 21 hearing, then is scheduled for a vote at the board's Nov. 28 meeting. (The subcommittee is chaired by Boyt; a new addition is Danette Chimenti who, interestingly, is also president of the SRCC.)

Speaking for CWS, Suttle pointed out that the company is offering to build and maintain an extension of the Town Lake Trail along more than 1,700 feet of waterfront (about one-third of a mile). Currently the trail dead-ends at the eastern edge of the CWS property, at the Austin American-Statesman office, and closing gaps in the heavily used trail is a civic goal. CWS has offered to grant city easements for parkland directly along the waterfront – on land that's unbuildable. Site plans filed with the city show the trail running in front of a complex with 840 units and three 200-foot-tall buildings that encroach on the waterfront setbacks. But the project's size also is limited by neighborhood compatibility setbacks; if the boards, city, and neighborhood want to be developer-friendly, granting a variance to that setback (but not the waterfront setbacks) could be seen as offering a reasonable middle-ground solution.

The implicit threat being posed by the developer is this: If CWS isn't granted the variance it requests, it won't allow the Town Lake Trail extension on its property. The threat has the ring of posturing, since having the trail would be a valuable amenity for CWS in marketing its new condominiums and apartments. But supposing the trade-off were real – would the gain be worth the sacrifice?

Not in the eyes of the Austin Neighborhoods Council, the Austin Parks Foundation, or the Town Lake Trail Foundation. All are taking the position that sticking to the waterfront overlay ordinance should be the city's top priority.

"I hope the city and its planning staff take a long, hard look at any variance requests for encroachment into the setback," said Griffin Davis, board chair for TLTF. Griffin expressed faith in CWS's genuine good intentions and hopes that the developer will explore other options that honor the setback. Davis said sticking to the setbacks and uniform adherence to the ordinance "is good for the trail, it's good for Austin, and it's good for other folks who want to do responsible development. If you preserve and protect the trail, it's going to end up protecting long-term property values."

On the Waterfront
As development accelerates along Town Lake, Austin faces urgent choices