Who's Paying for LCRA Growth? 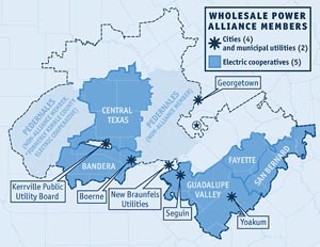 Drawing on the theory that there's strength in numbers, 11 Hill Country cities and electric cooperatives are demanding big changes from their power supplier -- the Lower Colorado River Authority -- and for once, it seems, the indomitable utility isn't holding all the cards.

The group of unhappy customers organized in May, under the name of the Wholesale Power Alliance, which as a group represents 43% of the LCRA's electric sales in some of the region's fastest-growing communities. The WPA emerged about the time the utility began calling on its wholesale electric customers to extend their contracts through 2041. The existing contracts don't expire until 2016, but by lining up long-term commitments now, the LCRA would be better positioned to plan, budget, and finance its growth, with the presumed blessing of the bond market.

But the formation of the WPA wasn't part of the LCRA's game plan. Never in its history has the agency been forced to engage in a form of collective bargaining with some of its biggest customers. The WPA appears determined to change that equation.

Thus far, according to LCRA spokeswoman Libba Letton, 27 of LCRA's 43 electricity customers have signed the new contracts. The willing participants include the utility's third-largest customer, Bluebonnet Electric Coop­er­at­ive, where former LCRA chief Mark Rose now serves as the CEO and general manager. As for the contractual holdouts, Letton said the utility is fully committed to reaching an amicable resolution with both the WPA and its major ally, the Pedernales Electric Cooperative. Peder­nales just happens to be the LCRA's biggest customer (and critic) and the nation's largest electric cooperative. With the PEC now aligned with the WPA, the two forces combined represent nearly 75% of the LCRA's bread and butter. Thus far, the WPA members have been officially content to remain largely off the record, while the PEC voices their major complaints.

The chief complaint of both the WPA and Pedernales is a long-held belief that electric revenues are effectively subsidizing the utility's water and wastewater projects and other agency operations. "We are consistently being told that the water part of the equation is paying for itself, but we have not seen evidence of that," said Pedernales spokesman Bill Cunningham.

Although the Pedernales and the LCRA have been hitched ever since Lyndon Johnson embarked on a mission to electrify the Hill Country during the late 1930s, the two agencies have not always had the best relationship. It grew much chillier within the last three or four years, Cunningham said, when the retail water business in Central Texas took on a more competitive edge. The LCRA made its enterprising leap into the water and wastewater business more than a decade ago, and by taking on controversial projects in politically sensitive, semirural territory, the agency hasn't won many friends in the environmental community.

The customers also have a beef with the utility's generous spending on community outreach (i.e., public relations) programs, as well as its expanded police force, which they say goes beyond what's necessary to ensure lake safety and power-plant security. The utility insists that such a police force is needed in view of increased numbers of lake drownings and boating accidents in the Highland Lakes, including Lake Travis, and to fulfill homeland security obligations.

"The LCRA wants to listen to what these folks have to say," Letton said. But it's uncertain what sort of resolution can come from the disgruntled parties' demands for lower electricity rates and changes to the LCRA's overall financial structure. Small but booming cities like Georgetown, Kerrville, and New Braunfels are said to be among the most dissatisfied of LCRA's customers and reportedly joined the WPA to try to gain a more prominent place at the agency's table. If that's true, Georgetown's Jim Briggs, who oversees the city's utility division, tempered any dissatisfaction he might have with cautious diplomacy when he spoke to the Chronicle earlier this month. "I feel like there is a lot of progress being made," he said, "not necessarily in the contract discussions, but in the strategic decision to negotiate as a group, which I believe will benefit the ratepayers and consumers in Georgetown."

The timing of LCRA's contract renewal efforts didn't exactly help matters. The agency began calling on customers just as natural gas prices soared, which in turn caused electricity rates to jump. "They can invoke fuel escalation charges because of the flux of the market; we recognize that," Cunningham said. "So we believe it's prudent that electric revenues go toward supporting the best possible electric system, and that water revenues go to support the water projects."

With 90% of LCRA's $1 billion revenue coming from its wholesale electricity sales, it's logical to assume that these dollars help pay for other agency functions. LCRA spokesman Robert Cullick defends the agency's spending, saying that it is fulfilling its river authority mission as directed by the Legislature.

Not everyone buys that argument. "We want the LCRA to focus more on the electric end of the business," Cunningham said. "Some of the programs they run are very nice programs, but they don't pay for themselves. This should be a time for tightening belts."

Historically, the LCRA's competitive electric rates have served as its best weapon against major industry rivals. But as some of the agency's largest customers see it, for the amount of dollars they put into the nonprofit agency, in return they should be getting lower rates. "We're not complaining about the quality of electric service," Cunningham said. "We feel that if the [electricity revenues] were not being spent on the water end of the business, we could sell electricity cheaper."

The Wholesale Power Alliance – an 11-member group of Hill Country co-ops, municipal utilities, and cities – seeks more input in how the Lower Colorado River Authority sets its rates and spends its money.

WPA members represent 43% of the LCRA’s electric sales; LCRA’s largest customer, the Pedernales Electric Coop­er­ative, is not in the WPA but remains closely allied with it.