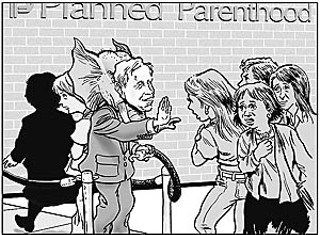 As of Sept. 1, Planned Parent-hood of Austin Family Planning Inc., had not yet received a contract from the Department of State Health Services allotting the health-care organization's funding for this fiscal year. The funding, administered by DSHS from three federal welfare and health-care-related sources, effectively determines not only the number of clients but also the scope of services the agency can offer patients at its East Seventh Street facility, the clinic that provides family-planning services to low-income, uninsured women.

The agency expected a cut because Congress had reduced one of the federal funding streams and because 2005 state legislation had already drained the modest 2006 budget. The "Deuell Rider 81" (after its author, state Sen. Bob Deuell, R-Greenville) required DSHS to allocate "up to" $10 million in family-planning dollars first to "Federally Qualified Health Centers" – community clinics that provide a host of health services to uninsured and/or indigent clients, in addition to family-planning services. But Rider 81 hadn't gone into effect until partway through FY 06, and a full funding year of cuts would not be in place until FY 07, so Planned Parenthood was expecting the worst.

So it was; earlier this month PPAFP finally received word that its FY 07 funding would be slashed nearly 34% – on the heels of the nearly 27% FY 06 cut. In FY 05, the Seventh Street clinic had a total family-planning allocation of $653,732. After Rider 81, PPAFP's reduced budget has meant that it has lost nearly 7,400 clients. The latest cuts mean the clinic's budget will now be $322,371, half of what it was two years ago, and the consequences have been even more dramatic. Through Aug. 31, 2007, the agency will have just enough funds to serve a total of 1,000 women, and only ages 19 and under.

By contrast, the FY 07 allocations to almost all the FQHCs have remained level or increased – apparently without regard to any quantifiable performance measures. In fact, according to agency records, DSHS actually asked a number of FQHCs to accept additional funds for FY 07 – even clinics that had been unable to use substantial portions of their FY 06 allocations. In other words, as the budgets of Planned Parenthood (and other specialty providers) are slashed, forcing them to hemorrhage clients, a number of FQHCs have seen healthy budget increases while not serving additional clients. That means the state has actually figured out a way to spend the same amount of money to provide less health care for the nearly 1.6 million poor Texas women in need of comprehensive reproductive health services. "It's politics at its worst, as far as I'm concerned," said Peggy Romberg, CEO of the Women's Health and Family Planning Association of Texas. "The tragedy of it all is that you can throw all the money you want at FQHCs, but at the end of the day – at the end of the fiscal year – women are not getting care."

Current family-planning providers saw Deuell's Rider 81 as a thinly veiled attempt to defund Planned Parenthood as an abortion provider, even though defunding the agency has no fiscal effect on abortion services – because already by law, not a single penny of taxpayer money can be used to provide abortion services. What the cuts in fact do is restrict access to reproductive health services – including testing for diabetes, hypertension, and several forms of cancer – for the most needy women.

In January, Todd Gallaher, Deuell's chief of staff, told the Chronicle that it was silly to think that the rider was merely meant as an attack on Planned Parenthood "instead of acknowledging that this other clinic may be able to serve the population better."

Thus far, Gallaher's optimism seems somewhat misplaced. In May, DSHS had to reallocate approximately $1.4 million in FY 06 family-planning funds that had been allocated to FQHCs pursuant to Rider 81 – several of them brand-new agencies – because they were unable to spend the money they'd been given. Locally, a brand-new FQHC, Georgetown Community Health Clinic (which has since changed its name to Lone Star Circle of Care), was awarded $510,254 in FY 06, yet as of July 11 it had spent only 10% of that money. Nonetheless, for FY 07 the clinic has been awarded $598,500 – a 17% increase – even though clinic officials had, responsibly, requested less funding for FY 07.

Indeed, the majority of the FQHCs asked either for level FY 07 funding or for less – yet the majority of the clinics were instead allotted increases. For FY 06, the Rider 81 allocations to FQHCs had totaled about $8.7 million; in FY 07 the agencies, as a group – following DSHS contracting guidelines – requested about the same amount. But beginning in June, agency officials again contacted each clinic and asked if it would accept additional money, according to DSHS documents. That curious procedure also meant that non-FQHCs (like Austin's Planned Parenthood) wouldn't be told until after the start of FY 07 exactly how much money would be left to fund their operations.

According to a June 21 memo by DSHS Commissioner Eduardo Sanchez, DSHS was trying to "increase the allocation of funding ... to assure compliance with the legislative intent to allocate up to $10 million to FQHCs." In the end, DSHS was able to convince many of the FQHCs to accept more money – even clinics that had initially requested reduced funding.

To Romberg and other family-planning advocates, it seems likely that someone – probably Sen. Deuell – was exerting pressure on DSHS to spend as much as possible on FQHCs in order to make a political point. "This is what separates a conservative from an ideologue," she said. "An ideologue pulls funding [regardless of the consequences]. A true conservative would see that the funds are used efficiently. So the ideological approach that gets funds out of the hands of Planned Parenthood is really, in my mind, a fiscal conservative's nightmare."

DSHS spokesman Doug McBride says no one pressured the agency into spending the entire $10 million on FQHCs. All the agency did, he told the Chronicle via e-mail, was "make every effort to meet the Rider 81 stipulation to award $10 million to FQHCs." In McBride's interpretation, the legislative phrase "up to" apparently means nothing to DSHS: $10 million is $10 million.

That's a view seemingly shared by Deuell. In an e-mail, Gallaher told us that over the course of the summer there have been "many discussions" with DSHS regarding the intent behind Rider 81, and that the clear legislative intent is to spend as much of the $10 million as possible. The only reason there was a massive midyear reallocation in 2006, he said, was that many of the FQHCs, new to the family-planning business, didn't have enough time to "ramp up" services – adding that, according to DSHS, for FY 07 they'll be able to use every available dime. Asked why any of the providers would request less funding this year if they're actually ready to spend all $10 million, Gallaher responded, "Senator Deuell wants FQHCs to increase their role as health-care providers to women," and therefore "he does believe they should take additional funds to cover the cost."

However, the phrase "up to $10 million" might have a different meaning to legislators who have urged DSHS to allocate funds based on performance. Sen. Jeff Wentworth, R-San Antonio, wrote to DSHS Commissioner Sanchez on June 15, "As you begin the process of deciding funding levels for FY 2007, I urge you to consider performance in FY 2006," he wrote. "It is unreasonable to expect traditional service providers to fire and rehire staff within the funding year because new grantees [FQHCs] do not have the ability to serve sufficient numbers of women," he continued. "The lapsing of funds is counter to the intent of the grant."