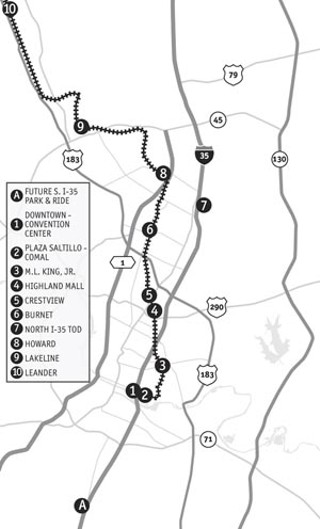 Austin's Transit-Oriented Development Ordinance, which officially became law on May 19, 2005, designated six areas of Austin as TOD zones. Leander established its own TOD ordinance and zone later that year. The purpose of each zone was to encourage maximum mixed-use density around major transit nodes, including six of the eight stops of MetroRail, Capital Metro's incoming commuter-rail line, and the North I-35 Park & Ride just south of Howard Lane. So how are the visions of the region's transit leaders coming along?

The only real ground-breaking has occurred at Crestview Station. Here's a brief update on what's happening elsewhere.

Leander: Thus far, only empty land surrounds Capital Metro's spiffy under-construction Leander Park & Ride along Highway 183, but there are plenty of signs advertising property awaiting development. Dan Steakley of Stanberry Commercial (among the Realtors) says he's received some inquiries but that most investors want a quicker turnaround to start realizing a profit, without waiting for the 2008 MetroRail start date. But he added that investors appear impressed with the intent of the TOD and the incoming rail system. "I'm not the least bit worried that we'll get a serious offer," he said. At the Real Estate Council of Austin luncheon on Sept. 14, Leander Mayor John Cowman described a vision of a new downtown for his city, one with slow traffic and a pedestrian-friendly sidewalk culture – radically different from the current highway but made possible by the presumed diversion of traffic onto the under-construction, tolled Highway 183-A.

North I-35 Park & Ride: The only TOD zone not located along the MetroRail line, this area currently looks nothing like what city planners would hope for transit-oriented development: lots of strip malls and one-story business facilities. But there's also a fair amount of vacant land nearby – presumably the planning wheels are still spinning on this one.

Northwest Park & Ride: While no ground-breaking has occurred around this shiny, new facility, planning on this zone in Lakeline Mall area, City Council Member Brewster McCracken says, "is very far along." Two "major landowners" have been working together, with design plans under way by both famed "New Urbanism" architect Peter Calthorpe and the ROMA Design Group, which designed the Mueller redevelopment master plan (see "Building Utopia," last week).

Martin Luther King Jr. Boulevard: On this spot, also known as the Featherlite tract, former Dell executive Tom Meredith is working on his first development. The fields remain empty, but "planning is in progress," says McCracken. Attempts to contact Meredith were unsuccessful as of press time.

Plaza Saltillo: This area along East Fifth Street has the biggest planning hurdles. While community advocates pushed for affordable housing to be included in all the TOD zones, they were especially concerned about this area, not wanting to accelerate the gentrification that upscale mixed-use development has already caused in East Austin. McCracken says that a community advisory group working on Saltillo is currently recommending affordability levels that are in line with the affordable-housing numbers sought in the November bond election, and "in the next couple of months we might get to final consensus."

Downtown: … is Downtown. The level of density the city and Capital Metro advocate around a commuter-rail station is already well-established and increasing.

MetroRail stops are also planned for the intersection of Howard and Burnet; near UT's J.J. Pickle Research Campus on Burnet; and at Highland Mall – but the TOD Ordinance did not create TOD zones in those areas.

The Howard Lane stop initially will simply have nearby surface parking, but McCracken expects it will eventually serve the massive development planned for the former Robinson Ranch. He expects the Pickle stop will serve not only the UT students and researchers, but also the thousands of IBM employees on that company's adjacent campus, as well as the nearby Domain development.

On Monday night, the Planning Commission voted unanimously to endorse a proposal to create a TOD zone around the Highland Mall stop, as well as another around a future Capital Metro Park & Ride on south I-35, for Capital Metro's proposed Rapid Bus service.