Small, local effort to call attention to discrimination against gays in military recruiting under way with sit-in Jesus Sanchez engages in a sit-in at the military recruitment center at Dobie Mall. (Photo By Jana Birchum)

Let Open Gays in Military On Aug. 22, Rebecca Solomon went to the military recruitment center at UT's Dobie Mall to enlist in the armed forces. At first, everything was going swimmingly. She spoke with the recruitment officer for some time about what a good fit she and the military would make. She's 18. She needs money for school. She's interested in health care. And, her family's multigenerational military history is nothing to sniff at: Her dad was in the Navy, her uncle was in the Air Force, her grandpa was in the Army, and her great-grandfather fought in the Spanish-American War. Then, she and her recruiter found themselves at an impasse.

"I told him I am a lesbian and asked if that would be a problem," said Solomon, who is also the local organizer for Soulforce, a national organization dedicated to ending political and religious oppression of gay, lesbian, bisexual, and transgender persons. "At that point, he told me I was unfit to serve my country."

On Tuesday morning, alongside Jesus Sanchez, an openly gay 24-year-old who ran into the same problem when he tried to enlist on Sept. 7, Solomon held a press conference in front of Dobie Mall. "Over 10,000 people have been kicked out of the military under Don't Ask Don't Tell, and there are currently approximately 64,000 people serving in silence," she said. "We are here as openly gay people who want to enlist and are ready to serve our country."

Before showing up at the recruitment center to protest, the two wrote to their representatives – Lloyd Doggett, Michael McCaul, and Lamar Smith – to ask them to support the Military Readiness Enhancement Act (HR 1059), which would end Don't Ask Don't Tell and replace it with a policy of nondiscrimination on the basis of sexual orientation. So far, none has agreed to meet with Solomon and Sanchez, who have decided to hold a good old-fashioned sit-in at the recruiting center – from the moment its glass doors open to the moment they close – until they get a response. Along with three supporters, Solomon and Sanchez walked up to the recruiting office's doors to find them locked. When a call was placed to Sgt. Richard M. Conner Jr., who was visible at his desk, the group was informed that the doors would not be unlocked for either protester, though other potential recruits would be allowed to enter. "We have business to attend to," said Conner, before hanging up to bounce a tennis ball against the carpeted floor. And so Solomon and Sanchez sat on the floor of the Dobie Mall … to wait.

It just so happens that the day before the local Right to Serve sit-in occurred at the Dobie, Comedy Central's The Daily Show With Jon Stewart featured a hilarious look at the twisted reasoning behind discharging a much-needed Arabic translator from the military solely because he is gay. Check out the clips, "Tangled Up in Bleu Parts 1 and 2", at www.comedycentral.com/shows/the_daily_show/videos/most_recent/index.jhtml.

How Green Is My Military?
Testing the military's (green) might

Letters at 3AM
Wild Cards 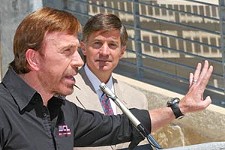