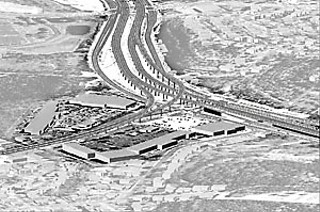 At last week's CAMPO meeting, Fix 290's Nina Butts presented this rendering of how TxDOT would turn the Oak Hill "Y" into what her group calls a "monster" superhighway.

Daugherty has never made it a secret that he thinks the county should spend more dollars, more quickly, to lay roads down around Travis County. This, by its nature, put him at odds with groups such as the Save Our Springs Alliance and Hill Country Alliance. Still, Daugherty could sponsor, with some conviction, meetings like the Southwest Travis County Growth Dialog as a way to reach some type of compromise between developers and anti-growth advocates. Daugherty was happy with the meetings, as long as those meetings led to a solution.

But when Daugherty recently got impatient with the progress of that dialog – the county's conservation development ordinance is now on its 10th draft almost a year after the dialog ended – he began his own series of powwows with area officials on a new route to western Travis Co. The anti-growth faction was furious with his efforts, accusing him of meeting with city leaders and developers in secret to push his pro-road agenda and coaching city leaders to offer the right endorsements for some kind of tolled roadway over the Barton Springs portion of the Edwards Aquifer.

Daugherty was more than a little defensive by the time the speakers were through, owning up to his meetings to talk roads and making no apologies for it – but also saying that the meetings weren't exactly secret and that his first meeting on a western roadway was with SOS Alliance's Bill Bunch.

"God forbid we would build an adequate roadway system in this community; that is exactly what most of the people come to me and ask," said Daugherty in response to the speakers, adding, "I make no apologies. I am willing to sit down with anyone at any table anytime, but I need to be able to sit down at the table and know that the answer is not, 'No, we're not interested in any additional roadways.'"

That answer is not likely to sit well with people like Gene Lowenthal, president of the Hamilton Pool Road Scenic Corridor Coalition. Lowenthal, an active participant in the Dialog, waved a memo from the village of Bee Cave at the board and accused Daugherty of meeting for four months with developers to come up with a road, most likely tolled, that would cross the Barton Creek watershed.

"Daugherty's road plan is not about fixing traffic problems," Lowenthal told the CAMPO board. "It is about using Bee Cave's and Lakeway's problems as a pretext for opening up large expanses of the Hill Country and Barton Creek watershed to rapid development. It will siphon investment away from preferred growth areas. It will reverse decades of conservation achievements. Given the absence of controls in unincorporated areas, it will certainly promote urban sprawl, resulting in even more traffic and more congestion."

Colin Clark of the Save Our Springs Alliance and Christy Muse of the Hill Country Alliance followed Lowenthal. Muse mentioned Daugherty's private meetings and noted that it was time that Daugherty return to a public dialogue.

"We know that developers and engineers are talking with our commissioner about proposed routes for an out loop, Texas 45 extension in Southwest Travis County," Muse said. "These kind of discussions must include neighborhood groups to reflect the needs of an entire community, not just those who will profit more from development."

And just in case that weren't enough for Daugherty – and by the look on Daugherty's face, it was clearly enough about three speakers into the discussion – the CAMPO board also had two factions of the U.S. 290 West toll road issue address them. It appeared that Daugherty had begun, in the weeks since the last CAMPO meeting, talking with a faction of Oak Hill leaders who were ready to cut a deal on the 290 toll road that would not necessarily be the alternative proposed by the grassroots Fix 290 group.

In her speech, Nina Butts, representing the Fix 290 coalition, showed a graphic of the TxDOT version of the "Oak Hill super tollway" and stressed that the local community still supported preservation of Williamson Creek and the grove of trees that gave Oak Hill its name. Sandy Baldridge, secretary-treasurer of the Oak Hill Association of Neighborhoods, followed her with an introduction to Consensus 290, a new group spearheaded by Daugherty to reach some solution on the toll road that is likely to be quicker and closer to the version TxDOT would prefer. "The goal of this group is to try to get all of the different factions to one table – and that includes Fix 290 – to come up with a solution to this roadway," Baldridge said. "This section of highway was designed in 1982. In 1995-96, the Oak Hill Association of Neighborhoods and the Oak Hill Business and Professional Association urged CAMPO to make this project a first priority. Ten years later, we still have the same road."

That kind of "let's get it done" mentality likely warmed Daugherty's heart, although Fix 290 has projected a redesign of the toll road into the parkway would not take as long as the three years that Austin TxDOT engineer Bob Daigh predicted. Baldridge, however, says the region can't afford to sink money into a project that would clearly be only "a 20-year solution" for regional traffic.

Muse, in the hopes of sorting out the fracas on both projects, has scheduled a road-centric meeting of the Hill Country Alliance for tonight (Thursday), at 6:30pm. The meeting, at Bee Cave Elementary, 14300 Hamilton Pool Rd., will be a cornucopia of CAMPO's regional growth planning, the Fix 290 project, and Daugherty's proposed west-side roadway. Muse confirms that Daugherty has been invited. 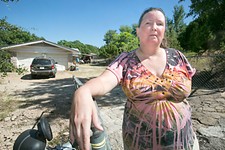