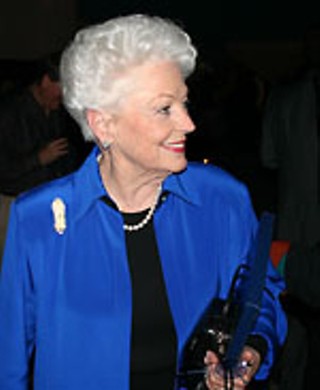 Ann Richards spent a lifetime dispensing advice, often unsolicited and sometimes brutally honest, to family, friends, and complete strangers drawn to her magnetic charm. She was nearly always right. Sen. Hillary Clinton, after taking a beating in the press for her many hair mishaps during her First Lady term in the White House, finally settled on one 'do after Richards told her either to go with a style that people forget about or, pointing to her own silver bouffant, "You gotta make a statement." Recalling the advice to an Austin audience Monday, Clinton concluded wryly, "You can see for yourself what my choice was."

Richards was right about that.

Richards left another pearl of wisdom: When you allow yourself to grieve, a cloud is lifted; you move on with your life. About 3,800 people of all ages, sizes, colors, and socio-economic statuses attended Richards' public memorial service Monday, entering the Frank Erwin Center under gray, soggy skies and emerging two hours later into bright sunlight, little cotton balls of clouds, and a gentle breeze. So she was right about that, too, of course. Elected officials and entertainers flew in from both coasts to celebrate the life and legacy of the former governor, who died Sept. 13 of esophageal cancer. She had turned 73 on Sept. 1. Church bells in Austin and across the state chimed in unison for a full minute, just as they did on that bright January day in 1991 when Richards was sworn in as governor of a "New Texas."

Earlier in the day, Richards had been buried in a private service at Texas State Cemetery. But it was not a day for mourning, at least not only mourning. From a private memorial last Saturday at the Capitol to the burial ground and the Erwin Center on Monday, laughter prevailed, courtesy of Richards' trademark wit. Lily Adams, Richards' eldest of eight grandchildren, recalled going with her grandmother, "Mammy," to Lady Longhorns basketball games. "We didn't just go and cheer politely," she said. "We sat behind the bench with Barbara Jordan and yelled until we were hoarse." Noting that coach Jody Conradt, along with her entire team and some former players, was in the crowd, Adams said, "Nothing would have made Mammy prouder." Conradt said later that she could always count on Ann to agree with her, recalling a photo that appeared in national papers "helping me dispute a call by an official. I appreciated that very much."

Former Dallas Mayor Ron Kirk and former U.S. Housing Secretary and former San Antonio Mayor Henry Cisneros lauded Richards for opening doors to minorities and women during her one term as governor, before losing her re-election bid to George W. Bush in 1994. "She made the state of Texas look like the face of Texas," Kirk said, while Cisneros touched on Richards' genuine "human connection." Longtime friend and native Texan Liz Smith, the famous New York gossip columnist, said she was there to provide comic relief, and she delivered. She brought down the house with her recollection of a lunch the two of them had with George Clooney. Richards arrived at the posh Sardi's restaurant bearing a gift for Clooney -- a piñata of Tom DeLay. Even with Republican officials, including Sen. Kay Bailey Hutchison, Gov. Rick Perry, and Lt. Gov. David Dewhurst, seated prominently on the front row, this was clearly one hell of a Democratic party, and Smith made certain it was at the GOP's expense.

On Saturday at the Capitol, Hillary Clinton's other half, former President Bill Clinton, homed in on a single little word -- "big" -- to describe his longtime friend during a brief but emotion-choked memorial service for the former governor. His eyes moist with tears, Clinton spoke to a small gathering of family and friends in the Capitol rotunda, shortly before the doors swung open to the thousands of people who would spend the next two days pausing before Richards' casket, adorned with the Texas flag, paying their respects to the woman who did big things.

"In this case," the former president said, "goodbye is also a celebration because of the big things that Ann Richards did." Clinton said that Austin ad exec Roy Spence had reminded him of The Dallas Morning News' early dismissal of Richards as "Texas on parade." Texas on parade, indeed, judging from the chuckles and nods of agreement in the rotunda. "For 30-plus years that is certainly what she was to me and Hillary," Clinton said. "First, she was big. Big hair, big bright eyes, big blinding smile. She also had a big heart, big dreams, did big deeds." Calling Richards "spontaneous, unedited, earthy, and hilarious," Clinton said, "I have talked to three people since Ann died who all said the same thing: 'I only wish I had written down every single thing she ever said.'"

Outside the Capitol after Bill Clinton's tearful, funny tribute, life went on, just as Richards would have wanted. A few members of the Conspirare Children's Choir of Austin dashed outside, took one look at the lush grass, and did what any kid and Richards would have done -- kicked off their shoes and ran around on the patch of ground. A few minutes earlier, they stood on the balcony above the rotunda and sang like little angels in maroon tops. Then they returned to just being kids. "This feels good!" a little boy squealed, wiggling his toes in the soft grass. A girl ran up from behind and tapped his arm. "Tag, you're it!" she said, and off they went, running around as a group of high school bands on Congress Avenue struck up the song Richards loved to hear at Lady Longhorns games: "The Eyes of Texas."

Ann and Bob: What Happened?

Ann Richards loved to tell stories. But the one she refused to tell, at least publicly, could have provided an entire juice-fueled chapter for a book Dave McNeely is co-writing with Jim Henderson on another Texas giant – Lt. Gov. Bob Bullock. It’s no secret that the relationship between Richards and Bullock turned sour not long after Richards took office as governor in 1991. But McNeely, who has covered the Legislature for more than four decades and knew Richards for nearly that long, couldn’t pry that potential gem of a tale out of the grande dame of Texas storytellers.

“When I went to interview [Richards] about Bullock, she said, ‘McNeely, I love you, but I’m not going to talk to you about Bullock,’” McNeely recalled. “It was really strange in some ways because they at one time had been drinking buddies, back when they both were still drinking.” In researching his book, McNeely said he heard of one Bullock-Richards story that had the two of them flying to New York for the 1980 convention on Bullock’s private plane. Once they hit NYC, McNeely said, “They didn’t go anywhere near the convention. They just sort of drank and partied all over town. That may have been one of the things that precipitated her going to ‘drunk school’ [as Bullock called it].”

Later that same year, Richards’ friends and family had an intervention for the rising star, and she agreed to check herself into a rehabilitation facility. She stopped drinking and smoking, although privately confided to friends that she worried she “wouldn’t be funny any more.” In November, she and McNeely canoed down the Lower Canyons of the Rio Grande together. Turns out that Richards sober was just as funny as she always was.

Bullock and Richards’ relationship was “relatively OK” during the governor’s first year in office, 1991, McNeely said. “Bullock had this huge temper; he would just lose it, and I think the Richards administration” – filled with a new crop of women and minorities on the rise – “pretty much figured ‘We’re not going to reward that kind of nasty behavior.’” A widely held theory explaining Bullock’s ill will toward Richards is that he was angry that she was holding the position he had always wanted but, for one reason or another, never sought. It was further insulting that Richards stole what had previously been his spotlight, his press coverage, his Capitol. But it also had to do with the traditional, institutional tension between the two offices. “Bullock thought that Ann Richards should just cut ribbons and sign bills and that as lieutenant governor he ought to be doing all the nuts and bolts and details,” McNeely said. “But Ann was into everything. She kept getting involved in things and Bullock resented that.” Richards’ strong hands-on approach to management likely proved a weakness more than strength. “She was a detail person,” said McNeely, “and I think sometimes leaders can err in becoming too involved in things.”

Folks who got along with Bullock knew well enough to keep him informed on anything and everything, McNeely recalled, but Richards refused to do that. “Bullock thrived on gossip, and the way to keep him happy was to provide him as much information as you could, including personal gossip. Richards simply did not supply that to him.” When Richards ran for a second term in 1994, Bullock switched his allegiance and backed Bush. The two were a perfect match. “Bush came in and supplied [gossip] to him in spades,” McNeely said. “Bush literally had Bullock eating out of his hand.”

Ann Richards' family has asked that memorial gifts be made to the Ann Richards School for Young Women Leaders, to open August 2007 in the Austin school district, through the Austin Community Foundation, PO Box 5159, Austin, Texas 78763, 512/472-4483, or online at www.austincommunityfoundation.org.

Below are links to some of the Chronicle's coverage of Richards:

"Thirty Years on Location: A History of the Texas Film Commission" (photo and quote), June 15, 2001 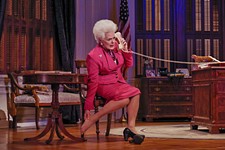 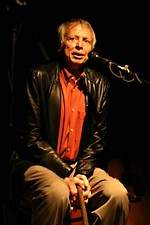