Former Texas Lottery Commission employee sues commission, alleging he lost his job because he alerted the Texas Legislature to security and ethics breaches, as well as to a cover-up in which employees 'are bullied into silence'

Charles is suing the commission, alleging he lost his job as a systems analyst on Nov. 4, 2005, because he alerted the Texas Legislature via an e-mail on Nov. 2 to breaches of security and ethics, and to a cover-up in which employees "are bullied into silence." The lawsuit, filed March 3, will attempt to scratch off three in a row by claiming the commission 1) has lied about whether its Disaster Recovery Center is operational, 2) has cheated the public out of money and records by inflating the cost of requested documents, and 3) has discriminated against African-Americans by denying them fair pay and promotions. Shelton v. Texas Lottery Commission and Gary Grief is headed for U.S. District Court in Austin in 2007. Derek Howard, Charles' attorney, says the case is "rare" in that it is so clear-cut and that the state's defense is so "thin."

Charles, who worked for the lottery commission for nearly 10 years and kept quiet for quite a while, says the commission engaged in unethical dealings – most pertinent to this case, the systematic sabotage of information requests. Charles also says he witnessed racial discrimination. "The commission made an offer to a black applicant for $10,000 less a year than a white applicant who scored lower on a test," he cites as an example.

Fear made employees suffer in silence, he says. In a prophetic Oct. 26 e-mail to acting Executive Director Gary Grief, Charles writes: "When managers can make statements like, and I quote, 'I'll fire everyone of you son of a bitches on my way out,' and employees are filled with such fear, no one speaks out. … I fully expect to be walked out of [the] Lottery as so many others." This type of threat was routine for administrator Mike Fernandez, Charles says. As he plans to bring out in the lawsuit, Fernandez earned a reputation for heartlessness in firing the late Mark Bradshaw, a cancer patient who reportedly had raised his own concerns over deleted records. Attempts to get Fernandez's take on the situation were fruitless, as the commission says it is its policy not to discuss personnel issues or pending litigation.

Grief never responded to Charles' e-mail, so on Nov. 2, he sent another more emphatic one to Reps. Kino Flores and Corbin Van Arsdale. "The Lottery Disaster Recovery/Business Resumption site has never been operational. … Millions have been spent on the site [to fix it] and the cover-up continues," the e-mail states. Charles attributes inflation of some open-records fees to the alleged cover-up, stating in his e-mail, "I have sat in meetings where the main topic of discussion [was] setting costs that would force requests to be pulled or modified to limit information release."

At a Nov. 14 hearing, lawmakers acknowledged Charles' concerns had validity. Charles says Flores visited the site later and found computers in boxes. The commission could not provide the Legislature with a start-up date for the center, amount spent, or test plan, Charles says.

Meanwhile, on Nov. 4, Joe Goebler, Charles' supervisor, and John Shaw, a human resources officer, summoned Charles to a meeting they had arranged to be recorded. According to the transcript, Charles believed Goebler and Shaw were baiting him to name names. "I really am not going to get involved in this kind of witch hunt," Charles tells them and then requests they put their questions in writing. Goebler replies "okay" to him more than once. But Charles' gut instinct that he was about to be thrown overboard was right; five hours later, Grief fired him for insubordination. The lawsuit claims Charles never refused to answer questions.

The state filed a lackluster response to Charles' accusations May 9. Assistant Attorney General William T. Dean writes that the defendants deny Charles' contention that a malfunctioning disaster recovery site could cost Texas millions of dollars in the event of an emergency because the site handles internal operations and not ticket sales. They also deny Charles' accusation that the commission inflated the cost of fulfilling public-information requests. "In fact, the Information Resources Department would only input the estimate of the number of hours required to fulfill a given open-records request but never had responsibility to set the actual costs for the same," Dean writes.

The defendants admit that Charles was fired despite the fact that his performance reviews were generally "excellent." And in justifying the accusations that Charles was insubordinate, the defense argues that the "use of the word 'ok' was nothing more than a verbal conversational pause, like 'ah,' and had no significance as an agreement to actually put questions in writing," the pleading states.

Semantics aside, the question remains: Is the expensive Disaster Recovery Center functional yet? Charles wishes anyone who poses such questions lots of luck, for, according to him, the answers may not be forthcoming. "When anyone asks about the center, the [management] always goes to the AG's office for a waiver to release information … in the interest of security," he says. Win, lose, or draw, the case may force the commission to be more open in the long run, one of Charles' key objectives in filing the lawsuit. "They want to run this operation like a private club," says attorney Howard. "I believe the law demands otherwise." 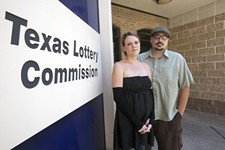