Spc. Mark Wilkerson learns that it's a lot easier to get in the Army than it is to get out 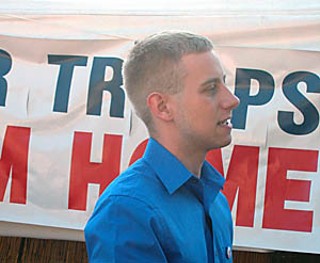 AWOL Army Spc. Mark Wilkerson announced Aug. 31 that he was turning himself in at Fort Hood. (Photo By Eileen Kelley)

When Spc. Mark Wilkerson enlisted in the U.S. Army, he thought he knew who he was. "It's like most 18-year-olds," he explains. "You think you know who you are, but it changes." He grew up in Colorado Springs, Colo., part of a conservative, Christian family with a military history: His father and grandfather were military, his grandmother was a Marine, and he was an active member of the Junior ROTC throughout high school. Enlisting seemed like the next logical step. Plus, he was a firm supporter of George W. Bush, for whom he rallied during the 2000 election. And, though he had enlisted before September 11, he says the attack only strengthened his resolve; when he was deployed to Iraq in March 2003, he felt that he "would somehow be avenging the deaths of those people."

When he was actually on the ground, however, his feelings started to change. "When we went, our general mission was to win the hearts and minds of the people," he recalls. "But when I got there, and I saw the people and how we were treating them, I thought, 'We're doing exactly the opposite.'"

At the time, what bothered him most were the raids he and his unit conducted in the homes of Iraqi families. Though Wilkerson is quick to say that his unit was professional, something felt wrong. "I don't want to say that every single raid we did was random, but an alarming number of them were. We would be bored and looking for something to do, so they would order us to go conduct these raids. It bothered me to see that there was no paperwork on these people who we were rounding up and throwing into prison."

It wasn't until he returned to Fort Hood in Killeen in March 2004 that things started to come together for him. Suddenly, he had access to media other than Stars and Stripes, the military magazine that he calls an "army propaganda stunt." When he read how much money "certain individuals were making on this war, how much money the corporations like Halliburton were making" in Iraq, it all clicked into place: He had been lied to by his commander in chief, on more than one count. "He told us they had weapons of mass destruction in Iraq. We didn't find any. We were told we were there just to get rid of Saddam Hussein. But we're still there now, even though he's in court. We were told this was part of a global war on terrorism. None of that was true."

When he confided in some noncommissioned officers that he felt he had been deceived, one of them suggested he apply for conscientious objector status. A conscientious objector, according to the military directive, is "a person who objects to participation in all forms of war and whose belief is based on a religious, moral, or ethical belief system." It seemed perfect: Though Wilkerson still considers himself a Christian and can quote a few passages from the Bible that support his cause, he says his aversion to war is not religion-based, but morality-based. "I think that what we are doing there is wrong. There is a very human toll that's happening in Iraq. I know a lot of people look at it this way: The United States has only lost 2,639 soldiers, and they've lost 100,000 Iraqi civilians, so we're winning. That's not how it is at all. Not everyone who dies over there is an insurgent," he says. "That's hard for me." 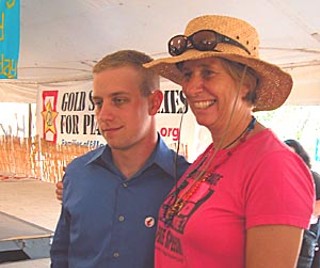 So, within a month of his return from Iraq, he filed as a CO. It wasn't until November, after eight months of review during which Wilkerson met with a military investigator, a chaplain, and a military psychologist, that he was told he didn't qualify as a CO. And meanwhile, he had learned that his unit was going to be redeployed in January. He had two months. "Right away, I filed a rebuttal," he says, "and was told it wouldn't even be considered until after I returned from my second deployment."

Up until that point, Wilkerson says, he never considered going absent without leave. "It was my last resort because I'm just not going to kill anybody or be killed for reasons I don't believe in, and I was having a really hard time finding anything about Iraq that was honorable."

So, he left. But after 19 months of working odd jobs and crossing his fingers that he wouldn't get pulled over, Wilkerson grew tired of life on the run. A couple of months ago, Cindy Sheehan announced that she intends that Camp Casey III – land she recently purchased in Crawford – serve as a refuge for soldiers seeking CO status. Wilkerson took her up on her offer. There, this past Thursday, onstage with Sheehan, Col. Anne Wright, and anti-war veterans Chas Davis, Geoffrey Millard, and Charlie Anderson, Wilkerson made the announcement that he was turning himself in at Fort Hood. He also came out publicly as a war resister, becoming part of the small, but growing, veteran anti-war community. According to the Web site TomJoad.org, Wilkerson joins 46 other veterans who are public war resisters, many of whom are AWOL and face jail time. Overall, reports on the number of soldiers who are AWOL vary drastically, from 8,000 (USA Today) to 40,000 (Los Angeles Times). "We've had more people in the American military tell the American public that this war is wrong than we have public civil servants, who have no jeopardy when they stand up," said Wright, who in March 2003, after 29 years in the military and 16 years in the U.S. Diplomatic Corps, resigned in opposition to the war in Iraq.

All of those who were onstage, save Sheehan, accompanied Wilkerson on the 40-mile drive to Fort Hood. Upon arrival, Wilkerson became a soldier again: straight-backed, hands clasped behind his back, he ended every sentence with "Sir." He was greeted by Maj. Joe Edstrom, the base's public affairs officer, who explained to Wilkerson what would happen next: He was to be returned to his unit, which had been notified of his arrival. "Once he processes with his unit, it's up to his chain of command what, if anything, would be pending as far as the charges," explained the major.

As Anderson and Davis helped Wilkerson carry his bags onto the base, a supporter yelled, "We support you, Mark!" To a smattering of quiet hand-clapping, Wilkerson turned the corner without looking back.

"Tomorrow is a long day, and tomorrow is going to be a hard day," he had written on his blog the night before, "because this shaved, short-haired guy you see in front of you is not the guy I have been the last year and a half, and they can take my body, and they can do with it what they want, but my spirit is whole and it will be intact, and I will not let the military destroy me again and take away who I am like they did during the first two and a half years in the military. They are not going to win."