Tweet
print
write a letter
Unless you've been in a coma for the past year, you're well aware that Hurricane Katrina destroyed the homes of hundreds of thousands of New Orleanians. "Nearly 228,000 homes and apartments in New Orleans were flooded, including 39% of all owner-occupied units and 56% of all rental units. Approximately 204,700 housing units in Louisiana either were destroyed or sustained major damage," states a report released Monday (a day before the hurricane's one-year anniversary) by the National Association for the Advancement of Colored People, the Opportunity Agenda, and the Kirwan Institute for the Study of Race & Ethnicity on housing conditions in the city. What's notable about "The State of Housing in New Orleans One Year After Katrina," however, is that it offers immediate and long-term recommendations for fixing New Orleans' decimated fair and affordable housing market.

One of the report's short-term recommendations is that the four public housing complexes damaged by Katrina – about 4,500 units altogether – that the Department of Housing and Urban Development plans on destroying and replacing with mixed-income developments should be repaired and opened back up. "There need to be long-term solutions," said NAACP President Bruce Gordon during a telephone news briefing Monday. "The dilemma we have is that there's such a severe shortage of public housing today."

Former and current public-housing residents helped the organizations come up with the recommendations, said Tracie Washington, director of the NAACP's Gulf Coast Advocacy Center, during the briefing. It's not that people don't want mixed-income housing, Washington said. It's that people need places to live for the short term and that evacuees have to be able to get back to New Orleans and have a place to reside in order to be a part of the long-term rebuilding process. "It's clear that there is opportunity for an organized effort involving federal, state, and local [entities]," said Gordon, who defined "short term" as the next six months. Here are some of the report's short- and long-term recommendations.

2) Authorize additional housing vouchers to ensure that a portion of rebuilt private housing is affordable to low-income households.

3) Assist low-income homeowners in their efforts to repair or replace damaged homes.

1) Require a Housing Opportunity Impact Statement as a condition of public support for future rebuilding efforts.

2) Fully fund the repair and rehabilitation of privately owned housing stock, for both short- and long-term housing needs, and for new construction for long-term needs. 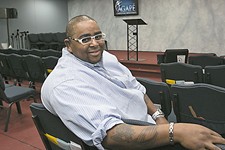