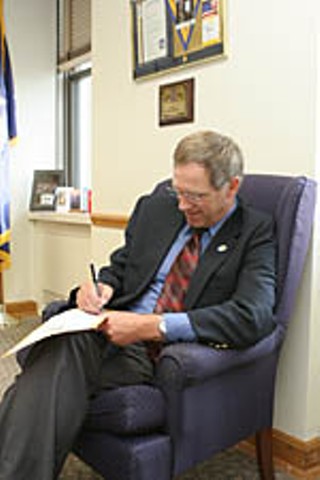 Sitting in his office on the sixth floor of the North Dakota Capitol just after 6pm on Aug. 25, state Agriculture Commissioner Roger Johnson (right) signed off on the final version of a proposed state rule that would allow farmers there to obtain state approval to grow industrial hemp. Although Johnson's signing of the documents (which will now make their way down to the Capitol's first floor, for review by the state attorney general) was decidedly low-key, the significance of his signature is monumental. Indeed, when the rule takes effect this fall, North Dakota will be first in line to challenge the near virtual ban on industrial-hemp farming that has been imposed by the feds – and, specifically, the Drug Enforcement Administration – since the 1970s. 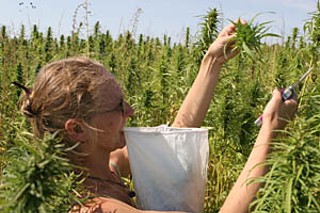 Industrial hemp – strains of Cannabis sativa with just trace amounts of tetrahydrocannabinol (THC), the main psychoactive ingredient in hemp's narcotic cousin, marijuana – was perfectly legal to cultivate (indeed, the feds even encouraged its production during World War II as part of its Hemp for Victory campaign) until language in the federal Controlled Substances Act blurred the definition of industrial hemp, melding it with the definition of pot, its prohibited cousin. Since then, the DEA has tightly controlled hemp production through its power to grant or deny – or to simply ignore – individual requests for permission to grow the extremely versatile and environment-friendly crop. (The DEA has only ever approved one permit, which expired in 2003.) Nonetheless, there has been renewed interest in hemp-farming; since the mid-Nineties, 14 states have passed laws calling for scientific, economic, or environmental studies of the crop, and several states, chief among them North Dakota, have legalized industrial-hemp-farming despite the virtual ban on cultivation imposed by the feds who claim, among other things, that legalized farming would somehow increase marijuana trafficking – despite extensive evidence to the contrary. For example, although the DEA (and its buddies at the White House Office of National Drug Control Policy) argues that industrial hemp fields offer pot purveyors the perfect place to plant their narcotic crop, hemp advocates – including farmers, state lawmakers, and officials – point out that cross-pollination would dilute the THC in pot plants, rendering them undesirable for pot-smoking purposes.

In February, Johnson traveled to Washington, D.C., – along with ag commissioners from several other states – for a meeting with DEA officials in an attempt to find out exactly what it is about industrial hemp that the DEA finds so irritating and to try to ascertain what sort of state hemp-farming rules the agency might actually, eventually, find acceptable. After returning home, Johnson worked up a proposed rule that included a provision that farmers must submit to criminal background checks and must provide geopositioning coordinates for their hemp crop. In June, Johnson convened a public hearing on the matter, and accepted additional public comments through July 20. Among the public comments his office collected were several from the DEA, which, according to information Johnson has now forwarded to state Attorney General Wayne Stenehjem, were, unsurprisingly, predictable – including a complaint that the state's definition of industrial hemp is "inconsistent" with federal law and that the state is furthering the "erroneous" impression that hemp is "a different species of plant than marijuana." Johnson counters the DEA's assertions by pointing out that the Controlled Substances Act doesn't make hemp illegal and that its language actually exempts portions of mature hemp plants – including the stalks, fiber, and oil – from CSA regulation.

Nonetheless, while signing the documents last week, Johnson told the Chronicle that he takes the DEA concerns seriously and has done his best to address them in the language of the state's final proposed rule – which, barring any revisions requested by the AG, will become law this fall. The final rule requires farmers to apply yearly for a hemp-grower license and to submit to criminal background checks; mandates that each farmer grow at least 10 acres of hemp; and provide the state with a detailed list of all individuals who will be involved with their growing operation, including the names and locations of seed and/or fiber processors (likely those over the border in Manitoba, Canada, where hemp farming has been legal since 1998), to submit to random state inspections of hemp fields and to sow only certified hemp seed – strains known to contain no more than 0.3% THC – among other requirements. Importantly, the state rule stipulates that it is the DEA that has the final say over whether an individual North Dakota farmer's bid to grow hemp will be permitted.

That caveat – that a farmer must receive a DEA permit – is what will likely allow the AG to sign off on the rule, since deference to the feds means there shouldn't be any conflict between provisions of state and federal law. More importantly, perhaps, the caveat is also a sure harbinger of legal action – a promise that, should the DEA choose to deny, or simply ignore, the permit application of an otherwise qualified North Dakota farmer, the agency is sure to see challenged in federal court its attempts to quash the inclusion of industrial hemp in regular crop rotation.

Reefer Madness: The Great Capitol Hemp Heist
See what happens when you try to separate a hemp lobbyist from his inner woody hurd fibers?