Democratic challenger can't get incumbent to talk with her; neither can we 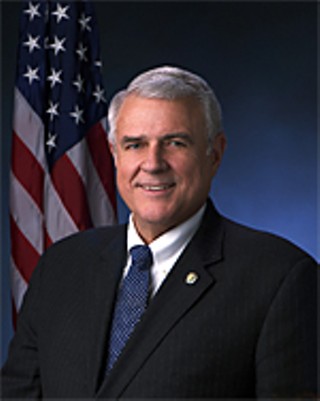 Democrat Mary Beth Harrell would seem to face an uphill battle to unseat Republican John Carter in the conservative Congressional District 31, which stretches from Williamson Co. north to Erath Co., but one has to wonder if Carter could pull a Clayton Williams simply by continuing to talk.

Harrell has challenged Carter to appear in a candidates forum organized by Temple public television station KNCT. The race is one of several that KNCT hopes to spotlight Oct. 16-20, but station manager Max Rudolph told the Temple Daily Telegram that all candidates in a particular race must appear, or that race won't be featured. Thus far, Rudolph said, Harrell and Libertarian Matt McAdoo have accepted, but no word from Carter.

Carter's responses as to whether he would accept were ambiguous at best, if not downright confusing. "No, no, no – I don't believe I'm going to be able to do that," he told the Telegram. "I mean, that's public television, and that's public radio. I will have to think about that. I might do it. I haven't decided yet."

In fact, Carter hasn't been quite clear on whether he'd be willing to debate at all. Earlier this summer, he told the Austin American-Statesman, "People earn the right to debate me. ... I will determine how and not them." He went on to say that the criteria for earning this right is "credibility." Harrell responded in a press release, "The bottom line is, the voters are calling for a candidates' forum with Carter and me so they can judge our credibility. That's the voter's job, not Carter's."

We'd love to ask Carter whether being the official nominee of one of the nation's two dominant political parties constitutes credibility or whether it might come from being a military wife and mother for most of her life (Harrell's son is serving in Iraq), but we can't contact him. The two phone numbers on his campaign Web site aren't working; we called his congressional office, which gave us a different number that was never answered, not even by a machine; a promise from his congressional office that the campaign would call us had not been kept as of press time. Perhaps we lack "credibility."