Want to know what 'conservation development' means? Then head to the Lady Bird Johnson Wildflower Center Aug. 31 and Sept. 1, or – if you're interested, but not that interested – just read this story.

Tweet
print
write a letter
Can it be? An approach to building subdivisions that also preserves environmentally valuable open space? While "conservation development" might seem like an oxymoron, in fact it's a workable land-use approach that soon could be encouraged by a new Travis County ordinance. The crux of the concept is to cluster houses and infrastructure on part of a site, while permanently protecting the larger portion of the land and linking it to other green spaces and corridors.

A symposium on conservation development will be held Thursday and Friday, Aug. 31 and Sept. 1 at the Lady Bird Johnson Wildflower Center. The conference, which focuses on economically feasible implementation, should be of interest to community leaders and environmental activists, as well as landowners, developers, and the professionals who plan, design, and build residential developments.

New subdivisions in semirural areas – such as ranchland in and around outlying Travis Co. – destroy wildlife habitat and native Texas plants, not to mention the beauty of the landscape. Whose heart has not sunk on a country drive upon seeing that a formerly bucolic vista has been "improved" into a grid of identical beige-on-beige starter homes? Conservation development, a national movement slowly gaining traction in Texas, offers a way to have our natural open space and build on it too. While it won't satisfy purists, its strength lies in its bipartisan appeal to environmentalists and developers, country folk and city folk, the reds and the blues. "Texas leads the nation in urban sprawl, with hundreds of thousands of acres of farmland lost to development every year," said Susan Rieff, executive director of the Wildflower Center, in citing the need to protect open space.

The symposium starts Thursday afternoon, with a hands-on workshop on how to design a conservation subdivision in Travis Co. Friday topics include lessons learned from conservation subdivisions around the country, info on how preserved natural areas can positively affect adjoining property values, and the proposed new Travis Co. ordinance. A Saturday morning field trip will visit a development using conservation design principles, the Preserve at Walnut Springs in Johnson City.

For more info on the program and speakers for the 2006 Conservation Development Symposium, as well as online registration, visit www.wildflower.org. 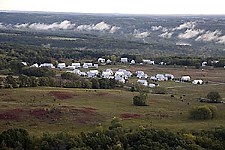 Save as We Pave?
Travis County hopes 'conservation development' can limit polluting sprawl