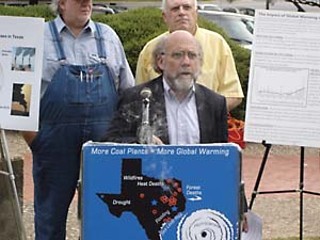 Why is it that 17 new coal-fired power plants remain on a permitting fast track despite heavy public and political pressure against them? And why, in operating these plants, are Texas utilities going to be allowed to increase our nation-leading CO2 emissions by 115 million tons per year (that's as much as 20 million cars and doubles our current output), as well as increase our toxic mercury emissions (also No. 1 nationally) and add other smog-forming pollutants to the air?

Because they can. A GOP-led U.S. Congress is slow-peddling on passing CO2 regulations, and Texas regulators appear to be too beholden to industry to protect citizens, choosing instead to root for the new plants.

The financial ties between Texas electric utilities and Gov. Rick Perry's political coffers run deep. TXU Energy, with 11 of the 17 pending coal generator applications, operates some of the nation's worst polluting plants, evidenced by a recent Environmental Integrity Project report. TXU also happens to be among the state's top political givers, according to a 2005 Texans for Public Justice report, which also shows Perry to be the No. 1 recipient of that cash. According to a state energy industry insider who agreed to speak off the record, Perry promised the coal plant fast tracks to TXU and other utilities in exchange for softening post-Hurricane Katrina price hikes (sure to be a political pain). He also supposedly promised to add back discounted funding for low-income rates and customer education – lost when the Legislature looted the Systems Benefit fund, designed to support such programs, in order to balance the state budget. (Perry's office had not responded to requests for comment by press time.)

TXU insists that by using the latest emissions technology, it will offset pollution from the new plants by 100%, reducing mercury, nitrogen oxide, and sulfur dioxide by 20% overall. The company also claims that its proposed supercritical pulverized coal plants are cleaner than IGCC plants, also known as clean-coal plants and gasification plants. Greens favor IGCC plants, which are capable of nearly eliminating mercury emissions and capturing CO2 emissions. TXU spokeswoman Kimberly Morgan said IGCCs aren't a proven technology and that they aren't compatible with the coal TXU plans to use. Greens argue that TXU's improved emissions claims are bogus since they're mostly mandated annual reductions that won't help in ozone season when it counts; enviros also chide the utility for not addressing global warming – which leaders, like Tom "Smitty" Smith of Public Citizen, say will lead to everything from worsening droughts to heat waves, flooding, wildfires, and illness.

With at least one strong climate change bill in Congress, Greens believe utilities are racing to get their coal burners permitted before federal regulations are passed. Asked why TXU isn't addressing CO2 pollution, Morgan said, "We can't make $10 billion business decisions based on rules that may exist 10-15 years down the road."

What's the state environmental agency's stance on the new plants? Terry Clawson, spokesman for the Texas Commission on Environmental Quality, referenced a July 13 presentation on the need for new electric capacity, delivered to the Texas Senate Committee on Natural Resources by Barry Smitherman, a member of the state's Public Utility Commission, which regulates competitive utilities. By 2009, "existing power plants will not be able to provide enough power," says Smitherman, declaring that "new coal and nuclear plants are a necessity," and dismissing renewable energy alternatives by stating that they "cannot reliably deliver power when customers need it."

Enviros counter that a combination of expanded renewable energy, cleaner, more efficient gas plants that capture and use exhaust heat, IGCC coal plants, and improved energy efficiency can meet new energy needs. Efficiency Texas claims efficiency measures effectively diminish energy demand but aren't pursued by utilities beyond low state mandates due to the absence of incentives. Enviros also note that all three PUC commissioners are Perry appointees, and that continued energy policy pressure must be maintained during the governor's race if Texans want to change the smoky status quo. 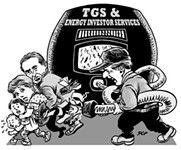