Secretary of State Roger Williams' officeholder account is brimming with more than $200,000 in donor cash, suggesting that he has been stumping for dollars ever since Gov. Perry appointed him to the post in 2004. 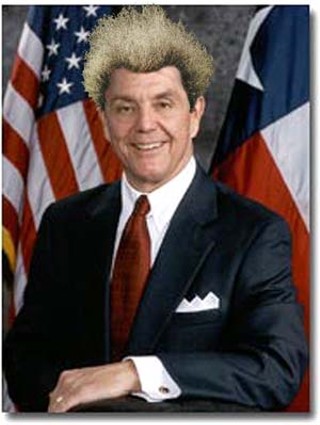 Perhaps Secretary of State Roger Williams needs the cash to imitate one of his biggest contributors, boxing promoter Don King.

As a nonelected office holder, Secretary of State Roger Williams doesn't have to stoop to the necessary evil of campaign fundraising during an election year. Yet Williams' officeholder account, brimming with more than $200,000 in donor cash, would suggest that he has been stumping for dollars ever since Gov. Rick Perry appointed him to the post in November 2004.

It's no secret that the Weatherford car dealer and national fundraiser for George Bush's two presidential campaigns holds political ambitions that extend beyond the secretary of state's office, which has served as a political springboard for dozens of others before him – from former Lt. Gov. Bob Bullock to U.S. Attorney General Alberto Gonzales. This year alone, Ohio Republican Secretary of State Ken Blackwell is pursuing the governor's seat, while former Florida Secretary Katherine Harris is running a disastrous campaign for U.S. Senate.

Williams, 56, briefly dabbled in a bid for state Senate in 2002, but pulled out of the race before raising any money. More recently, he has been mentioned as a potential GOP candidate for governor in 2010. It's OK for a guy to dream of moving up the food chain, but campaign finance watchdogs argue that Williams shouldn't be amassing six-figure bank accounts while serving as the state's nonpartisan chief elections officer, particularly when many of his donors rank among the richest and biggest Republican movers and shakers at the Capitol.

Williams' contributors include many of the usual suspects – oil and gas exec Louis Beecherl, lobbyist Rusty Kelley, Dallas billionaire Harold Simmons – but there's one name in particular that stands out: flamboyant boxing promoter and ex-felon Don King, who contributed a whopping $10,000 to Williams this year. Williams and King reportedly met and became friends during George Bush's 2004 presidential campaign, when King worked to rally the black vote for Team Bush/Cheney.

Dollar for dollar, Williams has far outraised all of his predecessors, according to institutional memories of some Capitol old-timers and Texas Ethics Commission records from the last six or seven years. TEC filings show past secretaries of state generally maintained modest accounts and used the funds to cover travel costs and protocol gifts for foreign dignitaries. The closest any former secretary of state has come to matching Williams' fundraising is Geoff Connor, Williams' immediate predecessor, who raised $46,109 during one reporting cycle, records show.

"What does he intend to do with this money? I think that's the real issue," said Austin attorney Buck Wood, who specializes in election and campaign finance law. (Wood has also advised independent gubernatorial candidate Carole Keeton Strayhorn, who has waged two unsuccessful ballot-related legal battles against Williams this year.) "I don't know if anyone has raised any serious money in the past, except in the past few years, to cover some of the travel that they do, but this is really off the charts. Raising $200,000 is obscene. It literally ought to be prohibited."

Since taking office, Williams has actually raised nearly $300,000, including $96,107 in the first half of this year, according to Ethics Commission documents. Should Williams decide to mount a campaign for an elected post, there's no law prohibiting him from transferring his funds to a political account, TEC general counsel Natalia Ashley said. Unlike other appointed officials, the secretary of state is subject to the same filing requirements as elected office holders, Ashley said. Similarly, the secretary of state isn't subject to any fundraising or spending caps. "The main provision on the use of political funds is that they cannot be converted for personal use," Ashley said. "The question to ask is whether the political funds were used to further individual or family purposes not connected with the duties of the candidate or the officeholder. That's the test."

Secretary of State spokesman Scott Haywood says his boss' account pays for costs strictly associated with his official duties, which range from meeting with foreign dignitaries, recruiting new businesses, and, of course, overseeing elections. But Williams' expenditures have drawn fire from watchdogs because they include consulting and fundraising fees paid to Republican operatives. Andrew Wheat, research director for Texans for Public Justice, points to Williams' spending in 2005 as an example. "His top expenditures were a $22,000 catering bill, $15,000 to a political fundraiser, and $9,000 to Delisi Communications," he said. "This sounds more like he is running a political campaign rather than throwing a piñata party for ambassadors."

"Well," Haywood responded, "there are generally costs associated with fundraising, and those are routine when you are raising funds for something or to pay an organizer for an event." He added that the payment to consultant Ted Delisi was a one-time expenditure for his work producing and mailing invitations to Williams' swearing-in ceremony.

Williams' flush account is simply a reflection of the fine job he's doing, Haywood said. "I think the fact that he has a lot of money is because there are a lot of Texans who appreciate the job that Secretary Williams is doing. He's out there working to bring new jobs to the state, bring new business to the state, and doing things to improve elections," he said. "And I think the support of Texans is always something that he appreciates."

Others aren't as appreciative of this type of reward system. "It lowers the secretary of state's office," said Wood, who oversaw the office's elections division several decades ago. "I'm really offended by it."