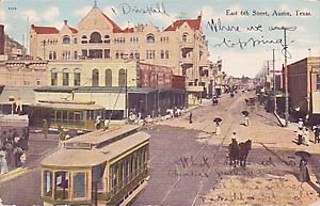 If Austin adopts streetcars, it wouldn't be the first time, as shown in this vintage postcard that was shown at the UT meeting.

Streetcars, trollies, light rail, and downtown circulators, all serving the same purpose, are hallmarks of great cities. Today, a streetcar plan for Austin is on track and moving forward thanks to Capital Metro's Future Connections Study and a trainload of grassroots organizing. After voters passed a referendum approving a Leander-to-Downtown commuter rail line in late 2004, Cap Metro initiated Future Connections to find a way to hook up the city's activity centers – Downtown, the Capitol, UT, and the Mueller redevelopment – to the new commuter line, now called MetroRail. Chief among those plans is the so-called downtown circulator; even before the 2004 referendum, community stakeholders were pushing for a downtown route to boost commuter rail's viability and utility, while diminishing car trips.

On Aug. 5, more than 100 people came out to a citizen-organized meeting at UT designed to seek comments from residents and neighborhood groups who live around the proposed streetcar's path, allowing them to talk with Cap Metro officials and comment on the not-yet-concrete routes – to kick the tires a bit, as one attendee put it.

It was the first large community meeting since Cap Metro's consultants and a citizens steering committee concluded this spring that streetcars were the best option for such a circulator, following a year-and-a-half-long alternatives analysis process, according to Lucy Galbraith, Cap Metro's Transit Oriented Development manager. From here, she said, the transit agency's board must vote to approve streetcars as the so-called "locally preferred alternative" and also come to a general agreement on a route. Once the 6.5-mile route – with an estimated $233 million price tag – gets initial approval, an extensive engineering analysis and search for funding partners would be conducted. Those results would require another Cap Metro board vote before a citizen referendum is set. Galbraith estimates about four years between final approval and opening day but says the timeline from now to final approval depends on the give-and-take between the Cap Metro board and citizens.

Mayor Will Wynn – who envisions 25,000 downtown residents eventually living in his vision of a compact city – initially hoped to get the process on a bullet-train pace by putting streetcars on the November ballot, but he admitted last Wednesday that it's too late now to hit that deadline. "The potential partners, the alignment still hasn't been fleshed out in a public enough way for a referendum. I certainly won't rule out next May or the following November," he said, adding that he "desperately" wants to expand the phase-one commuter line set to open in 2008. 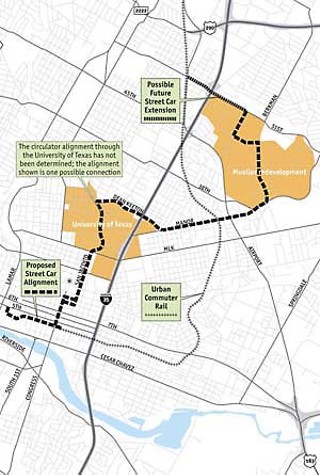 Proposed Circulator Alignment
With the Leander-to-Downtown commuter rail line now under way, the push is on for transit options to move people between Downtown, UT, the Capitol complex, and the Mueller redevelopment.
View a larger image

Two of Wynn's companions on the dais, council members Brewster McCracken and Lee Leffingwell, who also happen to be Cap Metro board members, were on hand Saturday. Leffingwell noted that making mass transit work was something favored in the goals of the Envision Central Texas plan, the two-year community process that in 2004 laid out a vision of a how to address future growth in the five-county Austin area. "To be more dense and to preserve green space outside of town, we have to have good mass transit," he said. Later, lauding the day's community-centric planning effort, McCracken said the discussion surrounding streetcars was now about "how we're going to do it, not if."

A July Austin American-Statesman report cast doubt on the streetcar, declaring that "the transit agency has no way to pay for it." Both Galbraith and Mark Yznaga, who focuses on transportation policy as chair of Liveable City – an activist group focused on managing urban growth – said they were surprised by the story, each explaining that recent streetcar projects around the country have not been primarily funded by transit agencies. Galbraith cited Portland, Ore.'s popular streetcar, which was funded by a variety of governmental entities, but also by developers. The first installment of Portland, Ore.'s streetcar, a 2.2-mile, $56 million project which started in its Pearl District in 2001, resulted in $1.4 billion in new development there, according to Dave Dobbs of local pro-streetcar group Light Rail Now. Dobbs, a former naval officer and retired educator, was there Saturday pushing his group's alternative – a three-phase route which would share track with the commuter rail trains and cost roughly about half as much as Cap Metro's plan. But even Cap Metro's proposed $233 million price tag, Dobbs reasoned, is small compared to many of the highway interchanges now under construction.

Jim Graebner, a streetcar and vintage trolley guru, has worked as consultant or planner on five new light rail projects nationwide and is now advising Cap Metro. He emphasized streetcars' proven tendency to incite economic development along their routes, and applauded Austin's efforts to get transit-oriented development in place early on. Responding to an anti-rail attendee's call for more roads to serve Austin's growing population, Graebner said, "In creating a neighborhood ambiance, having a pedestrian zone where you can live and walk is much more important than having additional lanes for cars to race through."

There are, of course, some voices against streetcars, and not just from anti-rail ideologues. Doubting the efficacy of streetcars, city Urban Transportation Commissioner Patrick Goetz has long favored grade-separated, elevated rail for Austin; he helped found the Austin Monorail Project in 2001. He points to streetcars vulnerability to traffic congestion, and he's afraid of seeing the city blow its transit wad on a poorly planned, anachronistic technology. "We need to integrate transportation and land-use planning," Goetz said, calling first for high-density zoning along the line. Then, before any rail is laid, he recommends investing $5 million in 10 new hybrid buses to run on the proposed route with the frequency of the UT Intramural Field shuttle bus (about every five minutes). "If we can't get high-density development and transit ridership with that, then we might as well stop fooling ourselves, because it ain't gonna happen with a streetcar, either," Goetz said. "We may realize that ridership is so high that streetcars aren't good enough and that we need the higher capacity and larger platforms of elevated rail."

But the discussion wasn't all about Downtown. Plenty of talk centered around light rail's pivotal role in facilitating more housing density and retail volume in the Mueller redevelopment as well as its TOD potential in central Eastside neighborhoods and the implications of that new development. Bo McCarver, who organized the Aug. 5 event along with the Austin Neighborhoods Council and served as its emcee, is the chairman of the Blackland Neighborhood Development Corp., which was started to counter 1980s land grabs by UT and exists to protect integrity and affordability in the Blackland neighborhood (west of Chestnut Avenue between Manor and MLK). He described himself as neither anti- nor pro-streetcar, but a "skeptic on the first date." But he liked the possibility that the streetcar could bring more employment to Blackland, whose median income is just about 65% of the city average.

But there are still some big where-and-when questions to be answered. As for the routes, most uncertain at this point are the ones passing through UT and the space-constrained intersection at Dean Keeton and Manor. How a streetcar will interact with the Seaholm redevelopment has also emerged as a variable lately. And there's disagreement about the timetable as well. Galbraith and Yznaga are both convinced that doing things right is worth waiting a little while; Dobbs, on the other hand, favors as rapid a rollout as possible. He said, "I'm extremely concerned with our current situation of oil dependence and marriage to cars," he says, and "things can go from kind of bad to horrific quickly," if chaos in the Middle East continues to intensify. Everyone on board with the streetcar project, however, can appreciate the necessity to lay rail as the groundwork for a city that's not beholden to the car – as Dobbs puts it, "a community that's more walkable and bikable, one that offers a larger supply of alternative transportation for all people and a greater supply of urban residential clusters so that everyone can live the downtown lifestyle at an affordable price." 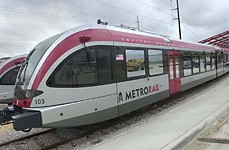 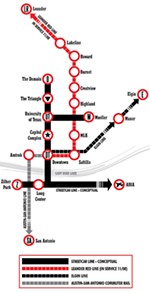